All you you need is the 91 freeway and some side streets to hit two new breweries. One Orange and another across the line in LA county. 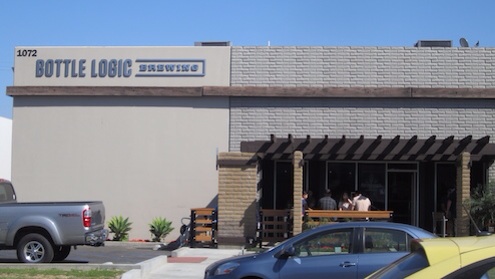 First up was the one week removed from their opening party Bottle Logic. Two left turns off the freeway and you are at their medium sized but well appointed tasting room. I especially liked the Hard Case/Phillip Marlowe style posters with beer names instead of novels.  And their small growlers looked stylish too. 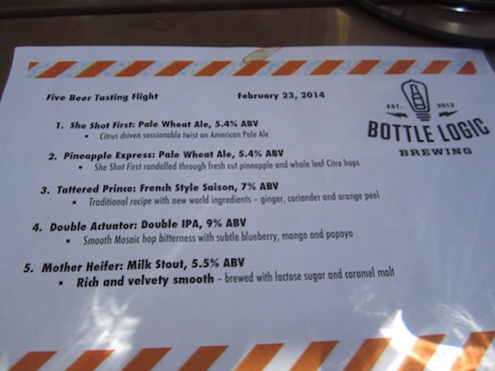 The lazy Susan without a wheel tasting tray was nice and a change of pace from the usual wood versions. But more importantly all of the beers were uniformly solid and very tasty. It was one of the rare tasters where it really more depended on your mood as to what you favorite was.  You could make a case for any of them but I really liked the Double IPA.  Very fruity, nice hit of bitterness and good and strong.  The special not listed in the photo above was a Leche Mole that was spicy but not overpowering.  I would choose the milk stout over it but for a spice beer it was more balanced than most. 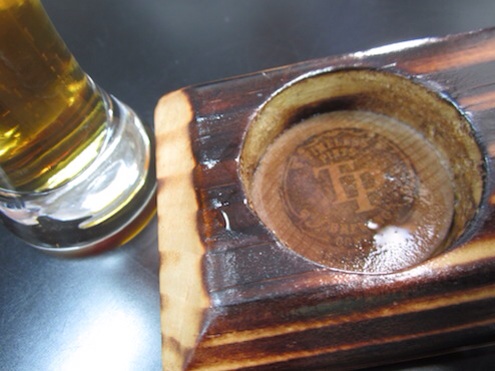 Next stop was Timeless Pints in Lakewood.  This will sound strange but they have seriously nice bathrooms.  As a craft beer drinker, that is almost more important.  Usually you find utilitarian accommodations.  The tasting room can’t be seen from the street but has a nice long bar and plenty of seating.  Again I went with a taster tray.  They have quite a few beers on tap so I went with the hop oriented selections.  The Red IPA and Black IPA were fine.  The red was a little on the thin side for me and the Black relied heavily on smoke but both came as advertised.  The Huckleberry IPA which is a blend of their Oatmeal Stout and their IPA was way wicked sweet for me.  Too much berry and not enough hop bite to it.  The best of the hop bunch was the plain straight up IPA which had a nice dank and pepper combo to it.

I also tried the Winter Festivale beer with pecans and cranberries which suffered from the same affliction of the Huckleberry IPA.  One predominant note.  This time it was pecans.  The balance was way off.  It was a good flavor but it needed to be part of an ensemble and not the lead.  But even that was better than the Belgian Dubbel which was a sticky caramel mess.  I could not even finish half of the two ounce sampler. 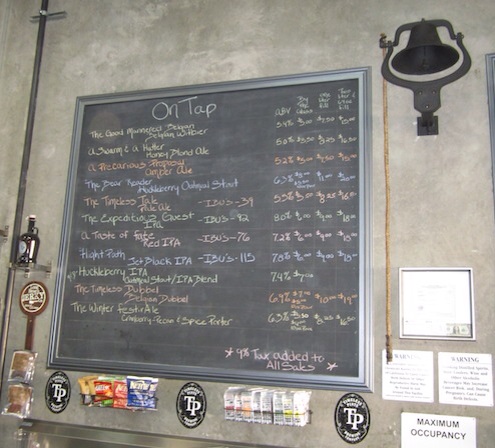 And even though Timeless is the elder of the two, they have some ground to cover to catch up because Bottle Logic has really started strong out of the gate and I really look forward to trying their beer at Firkfest in March.