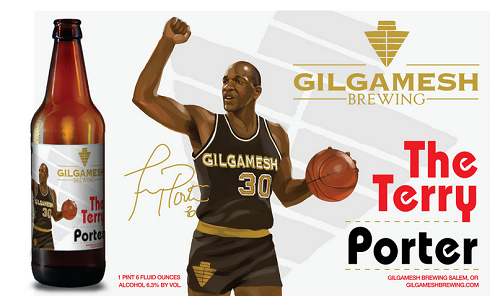 I remember being up in Portland on one of my many visits and being in a taproom that was pouring a porter simply called Terry. I didn’t know then if the beer was sanctioned by the former Portland Trailblazer, Terry Porter or not and what the legal ramifications of the name were. Oh and the beer was pretty good.

Fast forward to 2016 and Gilgamesh Brewing from Salem has actually teamed up with the former Portland Trail Blazer point guard for a limited-edition charity beer.

Porter and Gilgamesh have partnered to create a new, limited-edition beer called The Terry Porter. which was brewed to raise money for the Doernbecher Children’s Hospital Foundation.

Usually, in these instances the brewery would donate a portion of each bottle sold. But in this case both Gilgamesh and its distribution partner, Columbia Distributing, will donate $2 to the foundation for each bomber bottle AND $40 for every half-barrel keg sold in bars and restaurants across Oregon. If you happen to be in the Oregon State capital and to the Gilgamesh taproom, $1 will be donated for every Terry Porter pint purchased which is doubled to $2 during Blazer games.