I keep a rolling five years of the Firestone Walker Anniversary Vintages and this year marks the last of the 22oz bombers.

As a reminder, this anniversary blend was devised by Scott Hawley from the Paso Robles winery, Torrin. It is 40% Parabola aged in Bourbon barrels and new oak, 20% Stickee Monkee aged in Bourbon and Brandy barrels, 17.5% Velvet Merkin, 12.5% Bravo and 10% Helldorado, all Bourbon barrel aged.

It pours a dark brown with a bit of a reddish tint. As you would expect, Bourbon is on the nose. It is still a touch hot in the initial sips as well even after five years in the box. It is sweet as well with a fruit note that I can’t quite catch (maybe cherry). There is a bit of dark but not roasted malt character as this tastes like an amplified brown ale. 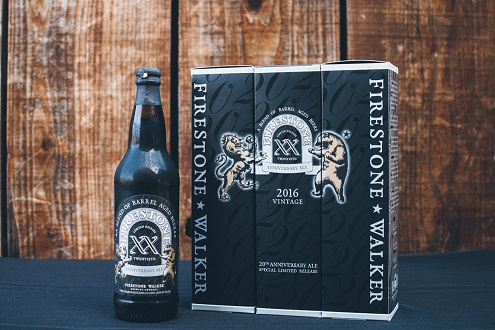 Fun Fact: This year’s Firestone Walker Anniversary XX barrel-aged beer is really only the 10 version of the beer. The tradition started with their 10th anniversary beer and has only grown in esteem and blending talent and barrels. So many, many barrels.

It took the competitive wine juices of 17 winemakers who gathered back in August to create this years blend. Scott Hawley of Torrin Vineyard was declared the winner and his blend serves as the base for XX which is broken down from (5) beers and 250 oak barrels!

Another Fun Fact:
X was sold for $9.99 per 22-ounce bottle and it was considered a really high price, this year bottles will start at $23.99 and be more than worth it. 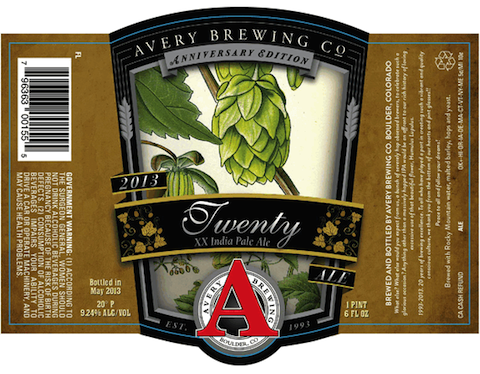 I am an Avery fan with a bit of a caveat, their IPA’s leave me a little cold.  Maybe I expect too much but they just don’t have the zing of their saisons and especially their Rumpkin and barrel aged beers.  That being said, I will not be missing this anniversary IPA….

“This year marks our 20th time around the sun brewing craft beers we love to drink. Each May, we release a special recipe in honor of our anniversary, and this year we present to you Twenty XX India Pale Ale.

A beautiful dosing of Amarillo hops gives a citrus punch to this aromatic double IPA, while the Simcoe® hops provide intense dankness. What else would you expect from us, a bunch of severely hop obsessed brewers, to celebrate such a glorious occasion?”

Dogfish Head has resurrected a few ancient recipes but it is good to see that the folks at Fuller’s (teamed with Ron Pattinson) have dug into their own backyard to bring back some old recipes from their archives.

As their website explains, “The Brew Book has been the bible of brewing at Fuller’s since 1845. Every recipe of every beer ever brewed at the Griffin Brewery has been recorded in meticulous details, documenting the profound skills of generations of Master Brewers.

Today’s Master Brewer, John Keeling, will be recreating a number of epic ales, named ‘Past Masters’, with those precise recipes from the Brew Book.

Sourcing ingredients as close as possible to those originally used, each Past Master will be brewed with traditional techniques to recreate a truly authentic taste.

Only one Past Masters beer will be brewed in a single batch for each release. Each will be unique in its character, and will be a very special opportunity for beer lovers to taste the beer of our forefathers.”

And these are the first two beers made:
“XX Strong Ale
The first beer in the Past Masters series we have chosen to recreate is XX, a strong ale which is perfect for bottle conditioning. Brewed at 7.5% ABV, with the original recipe first used on September 2, 1891, it is dark, rich and full flavoured, with a distinctly warming character.

XX is deeply satisfying, and an unforgettable experience for those who love traditional English beer.

Double Stout
Past Masters Double Stout is the second in the series, brewed to a recipe from 4th August 1893 – a time when ‘stout’ meant ‘strong’. Its signature ingredient is Plumage Archer barley, carefully malted and kilned using 19th Century methods. Dark, brown and creamy this beer is brewed to 7.4% ABV and balances a rich fruity aroma with smoky, bittersweet chocolate notes.”