I spend quite a bit of words on the fact that many styles seem to have gone down in trajectory. Another one to add to the list are sour stouts or sour with chocolate. Cascade Brewing is adding Dutch cocoa powder back into the mix along with vanilla bean for an intriguing combo with a sour double porter.

Speedway Stout, the classic big stout from AleSmith has its first variant of the year and it is caffeinated, “Speedway Stout Special Variant #1: Speedway Stout Espresso and Madagascar Vanilla – a signature edition of their imperial stout infused with tons of Madagascar vanilla and a bold espresso blend, bestowing intense notes of chocolate, coffee, vanilla and dark fruit.”

I missed either by mistake or by cost last year’s special La Folie Gran Reserve release: Geisha.  Now a new and even more intriguing barrel aging and nitrogen adding experience is on the way with PX.  The PX stands for Pedro Ximénez, a white Spanish wine grape varietal that is used to produce the namesake Pedro Ximénez Sherry.

New Belgium and their barrel wranglers procured 20 of these rare sherry barrels and put La Folie inside. Then… “Once matured, 400 whole, hand-split Tahitian vanilla beans were infused into the sherry barrel-aged base beer for four months, swirled every day to intensify the combination of vanilla’s sweetness with existing fig, sour plum and cocoa flavors.”

I may splurge for this one. 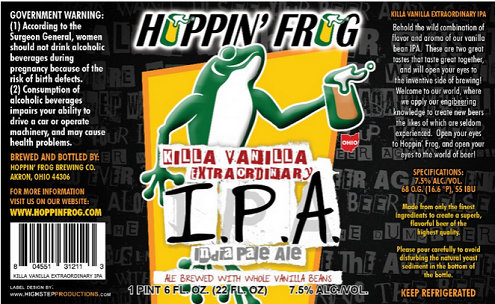 I am very picky when it comes to Black (Cascadian) IPA’s. Balance is important and that is a hard trick to manage with that sub-style. But I think a Vanilla Bean IPA from the Hoppin’ Frog might be even harder to manage. Would it impart a creamy, nitro-esque note? Or would it become a fight between sweet and bitter. File this under get a taster first.

Brewdog has something that will put high ABV to shame as a pursuit. It is beer as art according to the separate (from the main) website.

“Abstrakt is a new type of beer brand, we will only ever brew and release a beer once
Abstrakt will release a very small number of limited edition batches per year
More art than beer, Abstrakt will brew directional, boundary pushing beers: blurring distinctions and transcending categories
All Abstrakt beers are bottle-conditioned, individually numbered and known only by their release code, e.g. AB:01″

They have released and sold out of three beers already with more on the way.
VANILLA BEAN INFUSED BELGIAN QUAD 10.2%
TRIPLE DRY HOPPED IMPERIAL RED ALE 18%
IMPERIAL ALE AGED OVER 2 YEARS IN WHISKY CASKS WITH RASPBERRIES AND STRAWBERRIES 10.5%

The 03 sounds delicious. Which one would you shell out 10 or more pounds for?