Light and dark from Oregon way with the middle being the can release from Arts District Brewing. Always make sure that you are drinking more than just IPA’s.

~LIGHT
Upright Brewing/ Saison Vert6.5% ABV
“Saison Vert is an open fermented wheat based brew made with black limes, giving the otherwise bright beer a darker flavor profile. Layered with spice, citrus, earth, and even walnut notes, Saison Vert goes down easily with tremendous nuance. Several kegs will see out of state distribution, so look for both locally and across the country.”

Flying the week after Thanksgiving is the way to go. Literally, no one was in the TSA line. I just walked right up and was through. That quickly, my trip to Portland had begun.

Each time that I head north, I make a list of places to go. Belmont Station is on it every time. Other points on the map come and go but for this trip, I wanted to make my first visits to two specific places and a long awaited return trip to an old favorite.

After buying way too much at Belmont Station, I headed along with my mom and wife to Upright Brewing. Near the Trailblazer’s Rose Garden. The brewing space is in the basement of a multi-use building. Little to no seating and no bar! The server was standing next to some taps and a chalkboard. You order and you try to find a spot to stand amongst the brewing equipment. 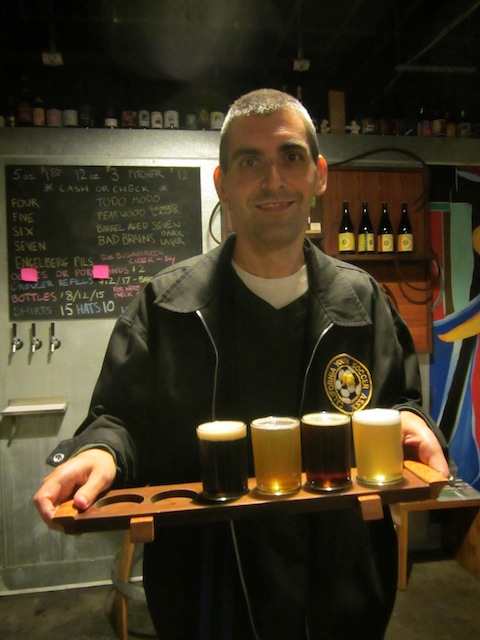 My sampler included Todo Modo, Pearwood Smoked lager, Bad Brains and Seven aged with Brett. Personally the lighter colors were the best. The two dark lagers were fine but could not compete with the flavors of the other two.

Next stop was Widmer. I haven’t visited the Gasthaus in forever. Checking their website before I left, I noticed they had a trio of New Zealand hop offerings. So I ordered that! 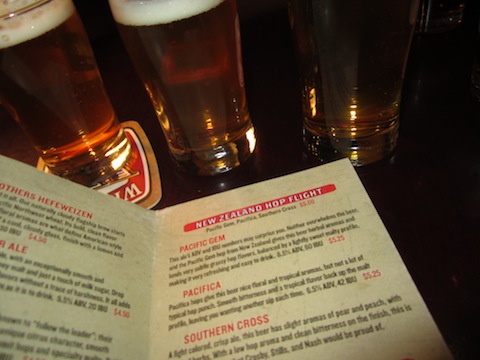 The Pacific Gem was the best of the group. But all really showcased the difference in hops from one part of the world. I got citrus, fruit punch and grape notes and pear too. All with a pleasant kick of bitterness.

My other new to me visit (though I have had a few of their beers was Gigantic Brewing. Tucked into (you guessed it) an industrial part of SE Portland is their very pretty space with Portland Timber and label artwork adorning the walls. No Axes of Evil. Though I wanted to try it. I started with Ume Umai… 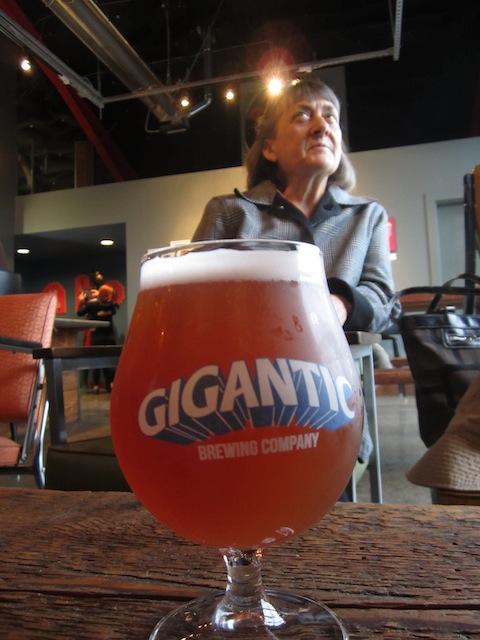 …a red hued beer with a nice effervescence and a nice push of plum taste. A really great fruit accented beer. I finished with their winter tipple, Old Man Gower which was a pleasant strong ale.

The last stop was spontaneous and I will talk more about Base Camp Brewing in a later post but suffice it to say it was a beautiful tap room and their S’more Stout had a toasted marshmallow! 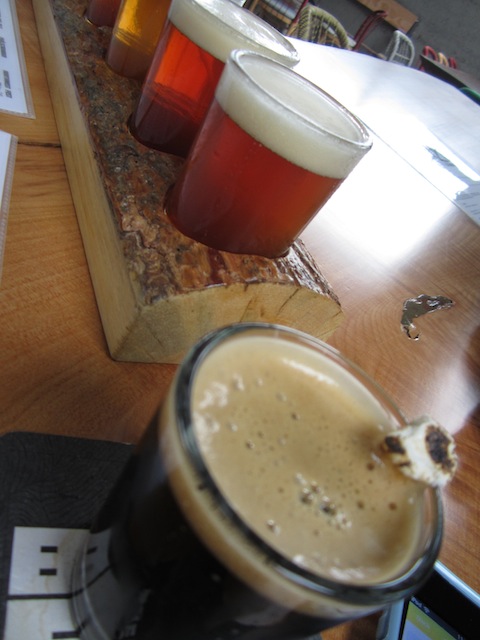 Upright Brewing of Portland is really following their own path. First they numbered their beers and now they are making “style-less” beers.

They say it better, “Upright specializes in farmhouse-inspired brews which are historically working man’s beers and so in the vein of the Punk Rock Warlords who wrote and played music for the poor and disenfranchised, we have decided to leave this brew both nameless and style-less and open to the interpretation of the thinking mans yob’s.”

One day I will have a beer named after me!

“Saraveza beertender, Tyler Vickers, and beertender turned manager, Jonathan Carmean, are well loved among their patrons and fellow industry pals…(really, what’s not to love?!?) Recently, they’ve received the ultimate props from local favorite, Upright Brewing. Named Tyler the Elder and Jonathan the Younger, these tribute beers will be found at Saraveza on Wed. Oct. 13th, with the man at Upright, Alex Ganum himself!”

Does this sound great? Yes, it does.

Gose is a little known East German specific style that is one of my favorites. I had it in Leipzig and was hooked. Now there are two brewers in Portland re-creating this forgotten beer. Cascade and now Upright Brewing. Due to my being born and raised just south of Portland, I follow the craft beer scene from afar and try to get to events and new breweries as time and money permit. The next best thing is reading about what is happening. And here is another voice that you might enjoy reading…

You can check out the latest posts HERE

Today is my 10th Wedding Anniversary!! In honor of that momentous occasion, here is a list of 10 beers and breweries to mark each passing milestone.