I have found a beer that I guess I hid out of spite for SABInBev. Time to open this 2014 pre-variant heavy slate of Bourbon County Stouts.

BCS14 – Pours a murky dark brown.  Light bourbon on the nose.  A little cherry in the taste but this is not heavy at all.  Some chocolate and wood notes as well with a tiny touch of sour at the back. Alcohol doesn’t really show.  Thinking that maybe 7 years was too much time? Just amazed at how thin it is overall

So this has been waiting in my cellar for a decade to pass. Couldn’t quite open it in 2014 or 2018. Seemed to need a bigger date for this “Super Jubel” from Deschutes.

Jubel 2010, subtitled Once a Decade Ale. Seemed appropriate that I should crack the wax off of this beer on 1/1/20.  Pours a dark amber, close to brown. The aroma filled the room momentarily. Fruitcake comes to mind.  Sweet brandy.  This beer still holds some ABV kick. This is a quite dry beer.  You get that spirit and wine mix but then it flattens into the alcohol. More subtle notes may have been lost in the ten years of aging. Quite good for a beer of this age.

Since it is an Orange County themed month, I went down to the Cellar (aka the car park, aka the garage) and pulled up a beer from The Bruery from way back in 2013.

This is what the website says about this anniversary ale. “Bois is our fifth anniversary ale, loosely brewed in the English-style Old Ale tradition using our house Belgian yeast strain and then blended using the solera method. A portion of each of our anniversary ales is saved in our barrels and blended in with the next year’s production, providing more complexity and depth of character that comes with age. Layered with complex flavors of dark fruit,vanilla, oak, and burnt sugar, Bois is a robust ale, surely the perfect beer to mark this major milestone.”

Damn this is a really sweet beer. Even the aroma is sweet. Boozy on the tongue and it does burn the throat a bit. Still hot after 6 years. Not much bourbon or barrel notes left. For a beer named after the Wood anniversary, I was hoping for some oak. Getting a vanilla maple syrup combo. Maybe better served to have held longer.

Yesterday, I completed another circuit of life. And to celebrate before heading out on a wee little trip, I brought this little gem from 6+ years ago, up from the cellar, Black Butte 24th Birthday.

Add this to the list of beers that I was worried about due to letting sit unopened for too long. But a big nose of barrel-aged-ness popped once I popped the cap of this wax sealed birthday reserve.

This beer though is really mellow. There is some oak and vanilla but no burn at all. That allows for the figs and dates to come through and show off a bit. This beet still had quite some carbonated spark to it as well coating the top of the mouth. Putting my nose deep into the glass, more of a soothing caramel spirit note is hidden deep too.

A good choice to savor as opening gifts.

One of my goals for late 2018 that will bleed over into 2019, is to clear the ol’ beer cellar to a more manageable size. That means, more of this…

I have been holding onto this beer for quite a while now.  Almost opened it on a couple of occasions but I finally broke through and brought it up from the cellar.  With the combined knowledge of Deschutes and Hair of the Dog, my worry about how this was holding up was more allayed than for other beers.  Initially, there is oak and quickly I learn that Collage #1 is still boozy after all these years.

Cherry and spice swirl around in pie formation but settle into the vicinity of a Flanders Red.  For a beer so old, it really tastes bright.  Not viscous or weird at all.  I probably should have sipped this a bit slower to look for more flavor adjectives but my surprise at its durability had me drinking it quicker.

Iron Lady is the last beer of the trio of local beers that I hauled up from the cellar to review. 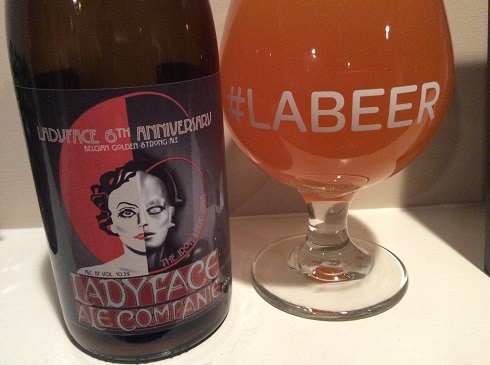 How did this Ladyface beer fare with age?

Iron Lady is a mere 2+ years old. Bottled in January 2016. This is tilted more to wine than beer. Viognier must is quite powerful. The strong Belgian Golden is muted by the white wine. Not super dry but a combo of grape and dry. Aroma is close to cider. Does not taste over 10% at all. I would have liked to see a more ester-y beer to make this more 50/50 wine and beer. 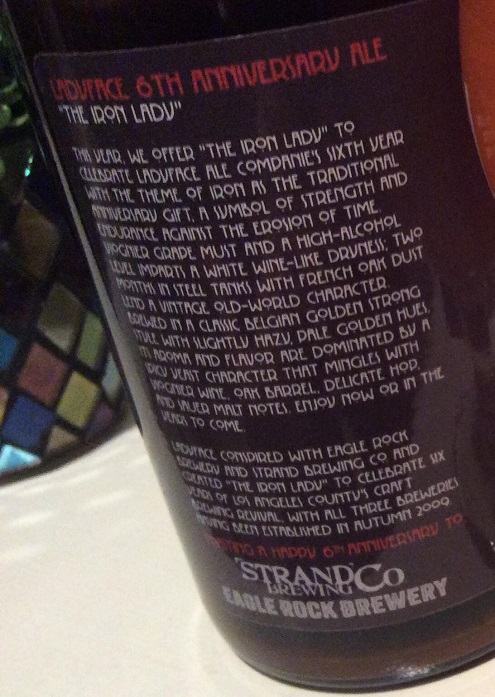 I am trying to remember to pull up a beer from the cellar once a month. I feel that I need to catch back up to the amount purchased. This month, we have a 2011 beer from Hangar 24 in Redlands. This Russian Imperial Stout smells like a rum barrel and not bourbon. Initially this super dark beer is quite sweet then there is quite a burn going down the throat. There is also a strange sort of woody note tucked inside as well. Three distinct flavor stages. This beer does not let you forget it is strong but it does end very dry. For a 7 plus year old beer, it has held up. With the years this beer might be sharper with no rounded notes that might have been there earlier but still a good sipper. 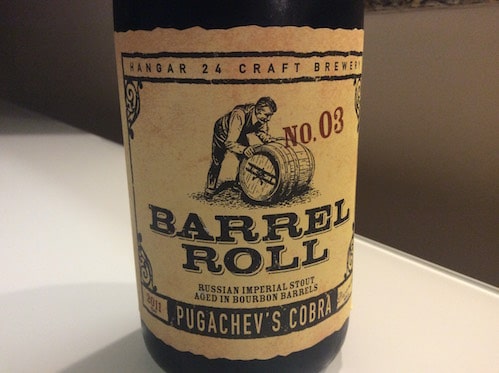 That was quite the cork misadventure. Top half sheared off. The neck was quite stuck. Had to hack away at it and when I finally got the cork pushed into the bottle, there was a short geyser that delayed my drinking as I was forced to clean up the sticky mess. Once drunk, it was still quite good for five years old. Getting a cola like sweetness with a light fizz to it. Some alcohol notes seep through at the back of the throat. Some Rohrschach lacing on the glass. 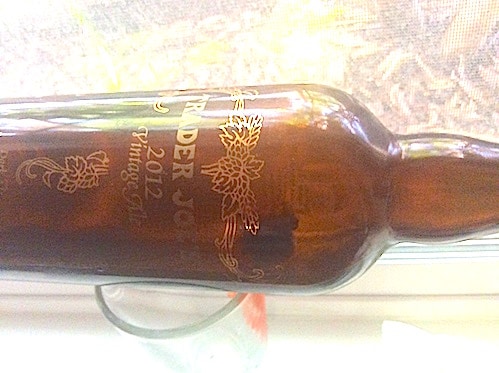 For a beer that is in essence, over 5 years old, it held up remarkably well. No weird off notes or flavors at all.

Every twice in awhile, I get a wild hare and go to raiding the beer cellar. Sorry, been listening to the S-Town podcast.

Going back to the halcyon days of 2013 for a barleywine from Oakshire Brewing of Eugene, Oregon. 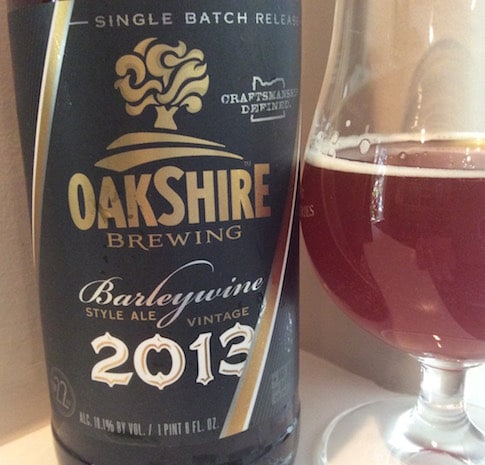 This one did bubble over even though I let it rest for a bit. As I cleaned up the mess, I got a vinous note in the aroma that worried me a bit. And when poured into the glass, there were flecks of brown stirring around.

Some oxidization had happened but as the beer warmed up, it became much more oaky and bourbon barrel. The caramel notes were intermingling with the remaining hop character as well in the this opaque light brown beer. Getting a touch of chocolate as well.

I would hazard a guess that this beer was better a couple years ago. The fade to barrel has simplified a beer that I hazard a guess was happier and less sweet.

I opened up my Bruery box for this post of Up From the Cellar and found that I either have anniversary or Christmas beers from the Orange County brewery that just held their Poterie anniversary.  The only outliers were two bottles of Black Tuesday and one White Chocolate.  So I brought up the WC.  Once I hacked the serious wax from the bottle cap the beer pours a deep orange color and quite bubbly at first which took me aback. The aroma is white chocolate for sure but not as strong as remembered from past tastings which was the first hint of trouble.

I think I held this one too long by a few months because there is a little too much in the way of sour notes or should I say cider-ness to it. That means a loss of velvetness from the original which was very smooth to the point of 5 stars on Untappd from yours truly. The aged White Chocolate has a medicinal hump that eventually falls back into the vanilla/chocolate swirl but it takes too long to get there and only stays for a fleeting moment.

That is part and parcel with aged beer though.  You try some that have lost just too much from the original. 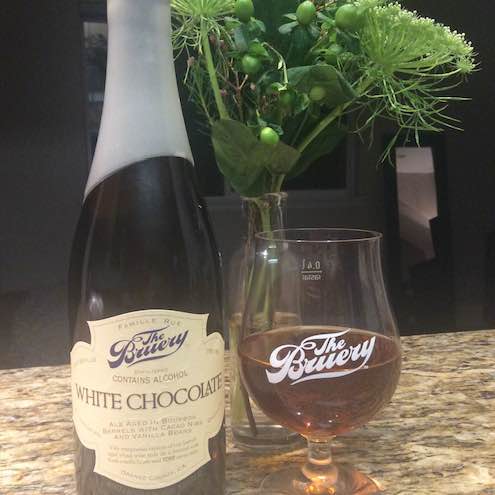