Yup, Untappd is hitting the small screen with a travel show hosted by Kenny Gould from Hop Culture. Starting in Pittsburgh…

I didn’t fill out my 2021 March Madness bracket like usual this year because both the Ducks and Beavers are in and I had to give them some wins. But if you are not a basketball fan, you can upvote your favorites on Untappd.

“From March 18th until April 5th, use Untappd to check-in beers from your favorite participating brewery. During any given round, the brewery in each matchup with the most check-ins will move forward. The winning brewery will get their very own Sponsored Brewery Madness badge for all their triumphant fans to unlock!”

Has it been ten years?  Untappd has partnered with Dogfish Head for “a sour beer recipe called “I Remember My First Check-In” and the base recipe will be available to breweries and homebrewers that want to participate in the celebration, giving all an opportunity to create their own version of the beer.”

Here is where the creativity of brewers will kick in, “All participating breweries are asked to source at least one of their ingredients locally and directly from a grower or supplier. Brewers are encouraged to release their own version of “I Remember My First Check-In” starting October 18th…with a special badge to pair with it.”

Who doesn’t like a good raffle? And you can win some serious beer too. Follow this LINK Whale Hunters and buy a few tickets to help the Make-A-Wish foundation. Personally, I went for the Cantillon package.

Beer Advocated purchased by Untappd. To be more precise, by Next Glass, the owner of Untappd. And no, they are going to merge their ratings systems. They know better than anger that fan base.

This follows upon the “other” beer rating website (RateBeer) being bought by SABInBev. Quite frankly, I have not used RB’s site since I do not want Big Beer to grab any of my beer data and since the Beer Advocate magazine stopped, I haven’t really dropped by their website either. I have had subscriptions for pretty much every beer magazine down the pike, included Craft Beer & Brewing currently but minus Beer Paper LA and blogs, the writing game is pretty scattered now.

Which means a more than likely, money or time losing situation for a passion project (like this here blog). I can’t fault Beer Advocate for going this route. It will allow them to focus on events or other projects that could not have been done due to the lack of cash or hours in the day.

The question is, what is the future of sites like Beer Advocate and RateBeer. Both have passionate defenders but I feel the initial rush of giddy beer drinkers has passed and the middle ground of fans no longer deep dives into topics like they once did. I certainly do not even add everything I taste onto Untappd, and that really just requires wi-fi and a working finger.

Perhaps, there will come a time when there are different levels of beer rating services catering to passionate niches of people. Who knows what the future will hold.

Each time that Bud and Miller Lite hit the Untappd Top 10, I wonder if there is an intern somewhere with multiple fake accounts, making sure that the brands stay relevant in this corner of the beer universe. Who else would tick these beers and to this degree.

Diatribe aside, there is little that would make one go “Wow” from this list. The fact that Guinness blew away all other comers by a healthy margin despite having multiple variants is a healthy sign. How Lagunitas is #3 is a thinker but maybe that is due to a nationwide footprint and possibly global and nothing to do with the shuttering of locations. But landing #2 and # 3 has to take that sting out a bit.

I was hoping to see more craft represented. Really only (3) on the list with BrewDog, Bell’s and Sierra Nevada and all of them are on the larger side.

I am looking more forward to the deeper statistical dives that Untappd will release.

Recently, I hit a milestone on the Untappd app….

…and no matter what your opinion is on the usefulness of ticking apps, this is kinda cool. Not so much even for the 5,000 check-ins but the 4,040 separate beers. To me, that means a mixture of promiscuity and adventurousness. That number doesn’t even reflect all of the beers as many went untagged through the years. And that little blue graph reminds me that I need to make good choices with my ratings.

Some may not like Untappd or Beer Advocate ratings for the tickers or sometimes weird reviews but if you use the services just to measure yourself you might learn a bit. In a nod at transparency and/or education, here is my ratings charted by Untappd…

Why, for example are their three towers on my chart right smack dab in the middle?  And why is everything bunched up around 2 and up?

I would say that the majority of beers are in the middle of my taste spectrum and that I am pretty damn picky.  So there are no drain pours but very little at the far right either.  Is this the sign of an intelligent drinker?  I would like to think so.  But statistics are known to lie.  But I encourage all beer searchers to look at how they rate the beers they drink. 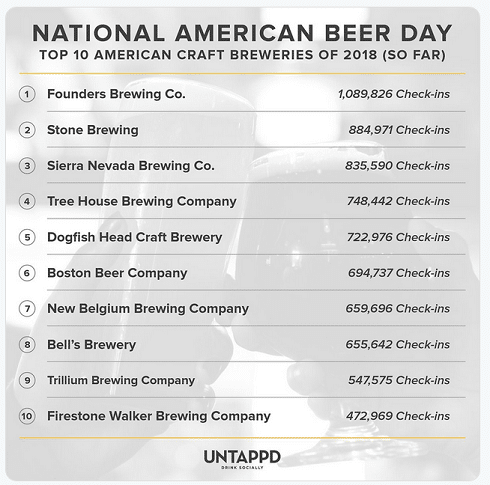 Granted this isn’t a perfect vote counting system but at least the Republicans hasn’t attempted to disenfranchise Hazy beer lovers so the plain total of check-ins on the Untappd app does have some good stats to follow and keep tabs on.

Trillium at # 9 is a bit of a shocker considering that it is primarily East Coast and traders that have access. Same for Tree House but more so at # 4.  I am a promiscuous drinker but I have had nothing (0) from either so the casual beer fan outside of New England probably hasn’t either.  Maybe checking-in is skewed East Coast?

Otherwise the only supposition that I have is that Sam Adams will probably rise a bit with the Red Sox World Series beer but that may be dampened by the Trump ties that Koch has. 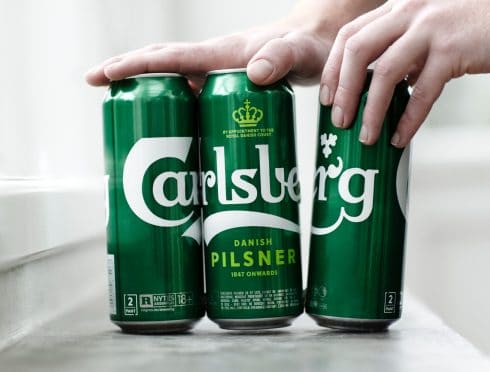 Part two of the Untappd podcast news comes from Carlsberg with some new packaging, the Snap Pack.

Instead of using plastic rings, or the bio-degradable rings or the plastic snap-on lids, the Danish mega-brewery is using dots, with glue that will bind the cans together enough to be moved about but still easy enough to pull apart.

It is in only the UK market to start but maybe this is something that can catch on here, if the price is right.