One of the annual L.A. Beer Week highlights for me is when Fifty/Fifty brewing makes the trek from Truckee with their rare (in L.A.) beers.

This year they landed at the Verdugo Bar and brought an eclectic mix from their beer line-up.

I went bassackwards and started with the heaviest beer and worked my way down. So first up was B.A.R.T. which is described as, “Barrel Aged Really Tasty. This is a rare one-off beer blended on the brewers whim. The most recent iteration contains a delicious blend of Totality Imperial Stout, Donner Party Porter, and our Summit Barleywine, aged in Oak Bourbon Barrels for 180 days.” 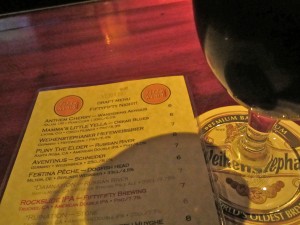 It was smooth and not super boozy. I’m thinking it had more of the regular porter than the Stout or barleywine because the 10% alcohol was well masked. Hopefully, I can try the 2013 version to compare and contrast.

Next up was Rockslide IPA. I had only imperial stouts from this brewery so this was a brand new experience. It was strong and hoppy but wasn’t a muddle like some can get. Nice initial bitter punch that melted away. 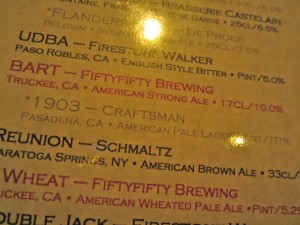 Last on the night was 4 Wheat, their American hefeweizen. Maybe the B.A.R.T. and the Rockslide were still on the palate but this tasted kind of strong but in a good way. Really wheat-centric without the banana/clove combo. A grand way to end the night.

“Find Your Balance“. You can do that at 50 50 Brewing. They have Belgian inspired beers as well as the usual pale and IPA culprits like this beer that I recently had..
Rockslide IPA
If being in one of the coldest places in the US isn’t extreme enough, the contents of this beer may very well redefine your commitment to the pursuit of hops. Rockslide IPA is brewed in the ‘West Coast’ style with aggressive amounts of American hops such as Amarillo, Centennial and Summit hops. You are greeted with a full frontal assault of citrus/grapefruit/pine hop character, followed up with malt to balance the mouthfeel. This beer is all about hops.