Today marks the 5th Anniversary for Transplants Brewing up in the north and they have quite the sweet treat in store with a coconut and chocolate imperial stout. Now might be the time to make the drive.

If you have been hearing a lot about concrete steps you can make to help the US of A in these difficult times, well, here is one way. Get some socks up to Transplants Brewing and receive some discounts.

Following independent beer can sometimes feel like you are following farmer’s markets. All sorts of fruits are used and many times, it is the fruit from the source, like this Apricot DIPA from Transplants Brewing...

Be it Masumoto, Schaner’s or Whalley’s. Keep track of brewery social media and support these farm to bottle products. 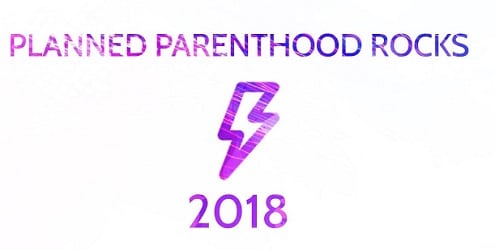 If you hadn’t noticed, this blog is not a fan of the intolerant, racist, sexist Ooompa Loompa in office (no offense to the good Oompa’s out there), which means that this August 4th event from Transplant’s Brewing is quite important. Especially with the radical right turn the Supreme Court will most likely soon take.

“We are proud to announce our second annual Planned Parenthood Rocks fundraiser! We plan to make this year’s event even better than ever! This year our local Planned Parenthood Action League is joining forces with Transplants Brewing Company to raise funds for Planned Parenthood Los Angeles! A portion of the alcohol sales will go to Planned Parenthood and there will be an amazing line-up of speakers, delicious catered food, vendors, raffle prizes, games, crafts, a drag show and all kinds of other entertainment!”

I made a (finally) second visit up north to Transplants Brewing to join in the festivities for their anniversary bash. 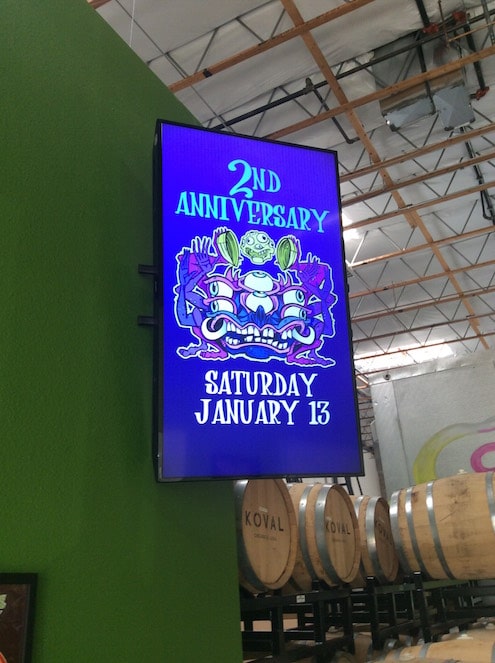 And I was surprised at the width and breadth of beers on offer (32 all told) as well as the growth in the brewing as well. I sampled 8 beers from the list and was impressed by all save one that was probably just too green (The Bible Salesman). I really liked the Mecha Pronghorn that was recommended to me by a certain beer Provocateur that was one of many beers aged in Koval barrels. The Imperial Stout had loads of chocolate taste to it and was very smooth. 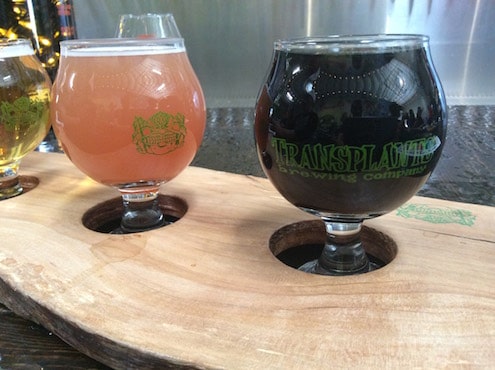 I also tasted my first pastry stout with a great name of Cut & Pastry. It certainly did have a doughy sort of taste to it and though not my favorite was certainly well executed. IPA wise I tasted CatBirD which was brewed with Hop Hash and Hemp CBD, it tasted very nice with a near NE hazyness to it. Fringe Element was a bit strong for an “IPA for Everybody” but I liked the taste of it and it paled to the two over 10% Triple IPA’s on offer. Going back to the dark side, the Ultra Double Filbert was probably my second favorite after Mecha. Both big beers aged in Koval Bourbon barrels, the UDF being a brown ale. 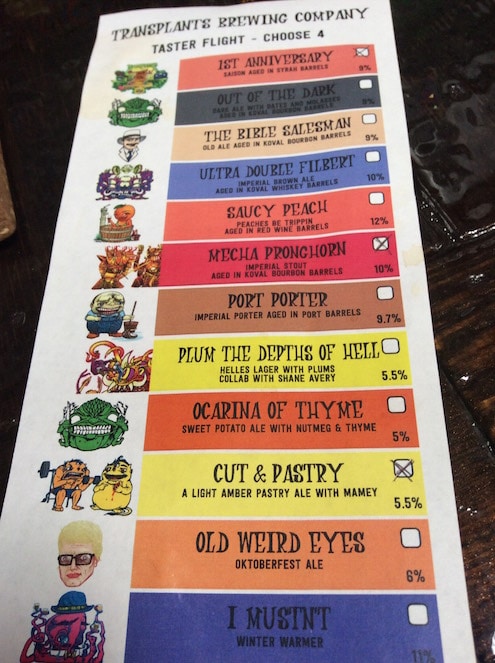 And while the artwork is still a little too weird for me, I can see how as a portfolio it is all tying together into a cohesive whole and really tells the story of this Palmdale brewery.

Hopefully, it won’t be another two years before I return.

Welcome to 2018! For L.A. Beer fans, it will be a busy first month to the year with many anniversaries and events already on the calendar, anchored by the L.A. Beer and Food Festival. But we will duck outside for this month’s A Book & A Beer and to Durham, North Carolina to visit some breweries from our computers.

~ e-visits to three breweries from Durham, North Carolina perhaps Barrel Culture Brewing and Blending, Clouds Brewing, Fullsteam Brewery or Ponysaurus Brewing Co.
~ special featured reviews of beers bought during one visit to Sunset Beer.
~ Heads-Up on Los Angeles Beer Events
~ Three suggested beers to buy this month. One light, one medium and one dark
~ A Book & A Beer reads The River Why
~ I will tap the Firkin and give my no holds barred opinion on the craft beer world.

This month for the featured reviews, I will compare two beers from one brewery. Rank the apples to oranges as it were. 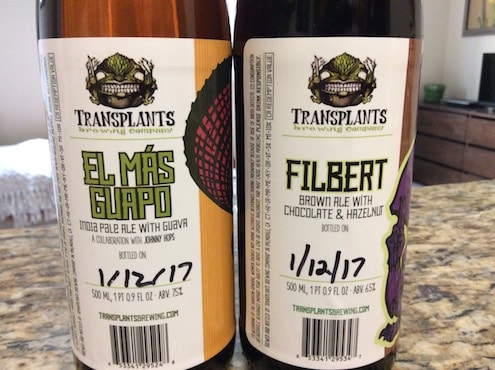 Not much head to it. Have to pour hard to bring up foam. Left me worried to start, but this turns out to be a really nice tasting chocolate brown ale with a slight touch of filbert nuttiness to it. Milk chocolate aroma then follows into the taste strongly and surely. Filbert lingers a bit on the palate before the nut part finally comes through. In between sweet and dry.

Light on the promised guava but the IPA part shines brightly. Guapo has a clean stonefruit taste with powerful hops at the start. The fruit comes in but is subtle and light and only peeks through as the beer warms up. Getting some dank undertones here too.

If forced to pick, Filbert would be my go to due to the chocolate almost candy bar taste.

Actually T + 1 as Transplants Brewing turns ONE this Saturday the 14th.

The event starts at noon. You can get all the details on time and address HERE but more importantly is their list of beers including the first barrel-aged Transplants beer…

There will be live painting adding to the brewery artwork, t-shirts, new crowler labels, new snifters and food from Zodiac Grill and Izzy’s Tacos.

Grand Opening Day for Transplants Brewing finally arrived and here are my thoughts on the beers and atmosphere of our northerly brewing neighbor. 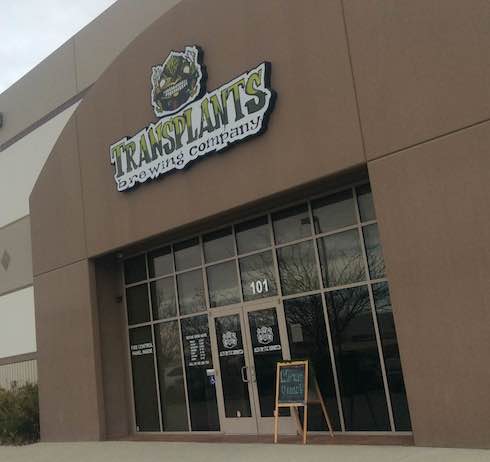 There were an impressive twelve beers on tap and an impressive amount of city officials with commendations too. The space is large and dominated by a cold box and bar in the center. Brewing operations take up the back corner and there is plenty of seating, including a couple of comfy couches to chill out on. 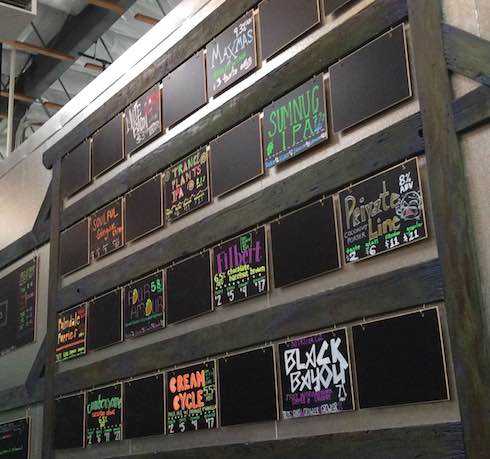 I started with a taster try of the lighter and hoppier. Palmdale Poppies is a nice light house beer. Cumber Some is filled with cucumber aroma and even more in the flavor. And it is apparently popular as a mix for beer cocktails already. Cream Cycle might be a skosh sweet but the beer has a nice cream texture and the orange and hops balance in the end. The SumNug IPA is as good as many other IPA’s from breweries too. 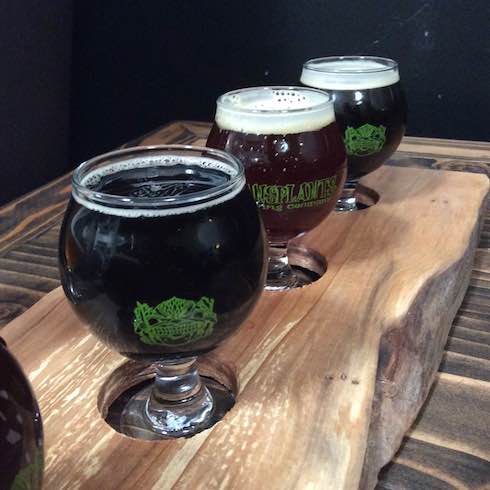 The second taster tray was the dark side. With a Filbert Brown that was big on chocolate but a little too thin for me. The Private Line Coconut had thankfully a restrained coconut taste but I have come to the conclusion that me and coconut and beer are not a good trio. The Bayou Black coffee beer was well executed and my favorite of the group which was rounded out by Maxmas a barleywine that was much more in the English tradition. Big and sweet and redolent of toffee. 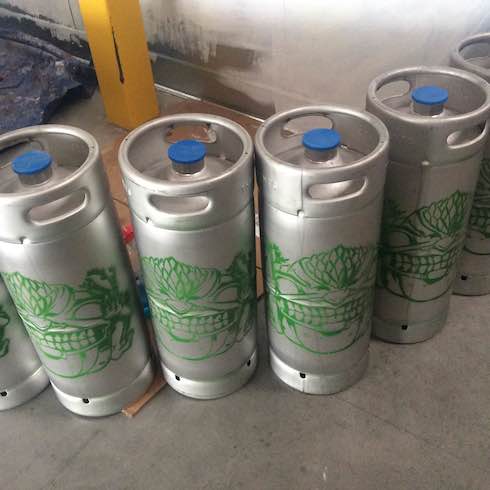 Out of the gate the beers are well rounded and considering the use of so many additional items like nuts and vegetables are surprisingly not gacky. (Technical beer term for too much going on in a beer.) There is room to grow in the dark beers and the IPA’s could use a little market distinction but this is a good starting point to grow from.

A new year. A new start. Time to resolve to be a better and more varied beer drinker in 2016. Hopefully, this blog will help you achieve that.

~ e-visits to three breweries from the pages of All About Beer magazine including Smartmouth Brewing Co., Saltwater Brewery and Black Mesa Brewing Co.
~ special featured reviews of IPA’s from Green Flash.
~ Heads-Up on Los Angeles Beer Events
~ Three suggested beers to buy this month. One light, one medium and one dark
~ A Book & A Beer returns!
~ I will tap the Firkin and give my no holds barred opinion on the craft beer world
~ … and Session # 107 covers the topic, “Let’s Be Friends”