This might lose me street cred but when I visited New York City, I did not visit one, single brewery. This can be explained either geographically, there is not much brewing on the Isle of Manhattan where I was during the trip.

The better explanation is that the beer bars that I visited afforded me enough selection for me to gain a wide taste of NYC beer without traveling to the other 4 boroughs.

The Columbus Circle Whole Foods gave me Barrier, Brooklyn and Bronx Brewing beers. A trip to Top Hops afforded me deep cuts of Sixpoint and new beers from Empire, Gun Hill and SingleCut Beersmiths. But even when I ventured out to foodie dominant spots like UrbanSpace NYC (Rockaway ESB) and Chelsea Food Market where I found a pint and growler spot The Filling Station. Lastly, a few blocks from the hotel was a Rattle ‘n’ Hum – West where I found beer darling Other Half on tap.

The downside to my travels was that I did not get deep enough into the NY beer scene. I could tell this because when I perused the bottles and cans, I would notice that I could get a lot of them in Los Angeles. I also missed out on getting to taste beers from Transmitter which was on my hit list.

It has to be said that this was not a craft beer trip. It was an anniversary trip so beer was second fiddle to sights such as Central Park, Grand Central Station and the theatre.

As an initial foray with hopefully more to come, this was good. I found out that SingleCut is really rocking IPA and that Southern Tier’s Pumking with cold press coffee is perfect with pancakes and that on a hot day, the Bronx Banner Golden Ale would fit the bill perfectly.

Here is part two of the photo round-up. Once the jet lag subsides, I will post up some notes from my Manhattan beer adventures.

NYC is a great place for the beer curious and another spot that I have heard about is called Top Hops. 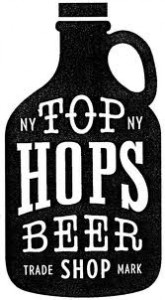 They call themselves “merchants and advocates of great beer.” And with over 700 bottles and 20 taps, it is no idle boast for this hop spot near the Williamsburg Bridge. With the likes of Clown Shoes, Greenport, Left Hand, Troegs and Captain Lawrence available, it looks like a place you can while away many an hour.