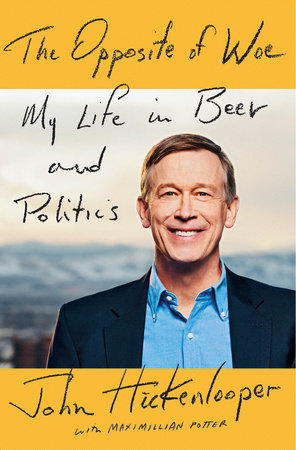 To be upfront, I was 100% more interested in the beer portion of The Opposite of Woe: My Life in Beer and Politics by Governor John Hickenlooper.

By the end though, I found myself much more interested in his childhood and his mother and how that affected his personality and choices throughout his life.

Maybe that was because both the beer and the politics really get short shrifted in this telling. Wynkoop Brewing was one of the pioneers of craft beer in Colorado, and I didn’t really get to read much about it other than an anecdote about cleaning toilets and fundraising through friends and families. There wasn’t mention of his favorite beers or much about the customers and the growing beer scene or even the Great American Beer Festival for that matter.

The tenure as Mayor of Denver got some coverage but his first term as Governor is just blitzed through with just a laundry list of accomplishments and personnel who helped him.

It is probably too early for a thorough accounting of his political career but I would have hoped to learn more about the craft beer part of his life. But maybe that is for another book. There were many hints dropped as to buried stories underneath the polite line of history that just were not picked up.

But the section up until he got to Denver is really interesting stuff from the point of view of how people are affected by those in their lives and how you can keep pushing and learning all through life. Just following his geographic route through life is remarkable.

Overall, this memoir suffers from what many do. The initial pages are full of content but as the pages go by, the coverage gets thinner until the end, whole years are barely even sketched. There is interesting stuff here but not enough for the beer fan.