Jester King Brewery not only has widely renowned beers but they also have a farm, a kitchen and lodging, so of course it belongs on any beer fans bucket list to make a visit to Texas.

Here are a few of the beers that I would sample…

and to top it off, a few tasters of their Spon series of beers.

Next on the Christmas agenda is getting the Christmas tree from the lot to the spot in the window at home. And this lactose, pecan and Amaretto stout from Texas and Martin House Brewing will be great for after the tree is up.

Los Angeles has a thriving craft beer scene and one of the nation’s largest Hispanic populations, so bringing our flagship El Chingón IPA and El Grito Lager here is the perfect next step in the Four Corners Brewing Co. journey. We bring together the culture of craft brewing with Mexican-American bicultural heritage, creating flavorful craft beers accompanied by vibrant lotería-inspired branding. Four Corners is perched at the intersection of the growing popularity of traditional Mexican import beers and the innovative nature of craft brewing. This blend results in a craft brewery with the ability to appeal to L.A.’s wide range of culturally diverse beer drinkers.

2. Can you give us the origin story of Four Corners Brewing

Four Corners is our collective beer journey that has taken us from being better-beer enthusiasts and home brewers to launching and nurturing our brand in Texas for more than seven years. Four Corners was founded in 2012 in an effort to elevate craft beer culture in our hometown of Dallas. Our goal was to reflect the diversity of the neighborhood and bring together creative groups of people to celebrate a common passion.

Before founding Four Corners, Co-Founders Greg Leftwich, Steve Porcari and I had become enamored by the American craft beer movement and were inspired to share our passion with others. Our true beginning goes back to Porcari’s home garage where we gained a deeper appreciation of the styles, ingredients and brewing processes as home brewers.

We’re proud and excited that our journey now provides the opportunity to brew our bold, delicious beers in San Diego and raise a pint with the people of Los Angeles and Southern California.

3. What is the flagship beer for Four Corners and will it translate to the LA market?

We believe our bold brews and Mexican-American inspired branding will appeal to Los Angeles’ bicultural beer drinkers as well as craft fans seeking new experiences. That’s what’s special about Four Corners — our beers hold their own against American craft brewers in terms of flavor and complexity and our vibrant branding attracts bicultural drinkers.

When we launched Four Corners in 2012 in Dallas,there were only a handful of breweries in the state and only two in the entire North Texas region. These days, there are more than 250 craft breweries in Texas. We’re proud that Four Corners helped pioneer and shape the burgeoning craft beer scene in North Texas and added a unique dimension to the Texas craft beer landscape.

5. What has been the impact of Constellation for the brewery?

We’ve embraced our partnership with Constellation Brands. It has provided the opportunity to share our beer with more people, first throughout Texas and now in Los Angeles and San Diego.

Our standard of brewing has remained unchanged because our management team and employees have continued delivering the same innovative and fresh flavors consumers enjoy today.

On to the second featured beer from Four Corners Brewing of Dallas. This time a lager, El Grito.

El Grito pours a super light and clear yellow.  Slightly sweet aroma. Nice bubbles to sweet to malt ratio. A corn taste grows here as well that contributes to being a skosh to sweet for me. Not complex, to the point.

I received a pair of media sample beers from Four Corners out of Texas so I started with their canned IPA.

Pours a clear orange color. Aroma is old school pine / grassy. Getting orange jello touch of sweet tart in the taste.  This is very West Coast.  Big malt presence balances out the action. To me this is pretty darn close to a red IPA which I would like to see more of.

Rahr & Sons from Fort Worth, Texas brews up a Winter Warmer that is our 4th holiday beer of the season. An English Dark Ale for cold days or nights. 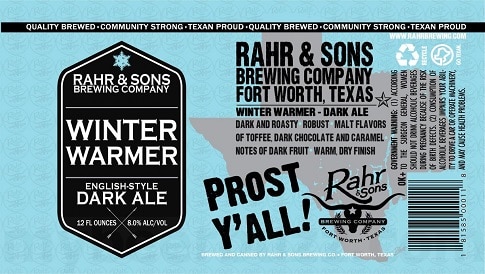 I don’t know all that much about The Collective Brewing Project from Fort Worth Texas but they are about to change that by showing up at the Beer Advocate Extreme Beer Fest on December 9th. To be followed by “a bunch of other events we will attend in the L.A. County area.”

Looks like we are in store for some Texas styled sours and saisons. 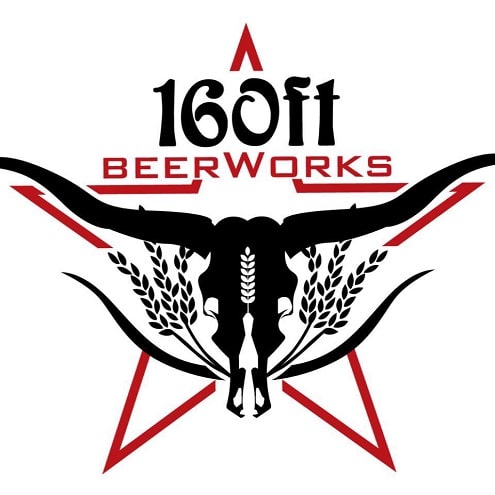 Our final stop in Houston is at 160Ft Beer Works. Which is unfortunately not open currently due to the flooding from Harvey.

And instead of sending thoughts and prayers, (which are nice and all, but…) how about planning how you would help out your local brewery if a natural disaster struck. Do you have a special skill that would help a brewery get back up and running or could you show and help dig out or clean?

I certainly hope 160Ft. is able to open soon so that people could have beers like the following:

This month we turn to Houston to showcase the beers from the area but also to show how they are responding to the hurricane and flooding.

Holler Beer has their Dollar Pils Y’all as the sales in the taproom for that beer over the long Labor Day weekend were donated to the Hurricane Harvey Relief Fund.

That beer and more would be on my initial taster tray…

Hype PA
“A juicy IPA made with loads of Galaxy and Citra hops, bursting with tropical fruit flavor atop a soft mouthfeel and mellow bitterness.”

Belgian IPA
“IPA with the fruitiness and spiciness derived from the use of Belgian yeast.”

ESB
“Full-bodied, malty English-style ale with an aroma of cherries and rich flavors including toffee, biscuit and an herbal hoppiness.”

Los Angeles is entering the last two months of summer. This is the time for that last hurrah of kolsch, helles and the lighter side of the beer world before heading into our version of Autumn. This month I have “planned” the following….

~ e-visits to three breweries from Houston, Texas. Doubtful any of them will have beers named Harvey anytime soon.
~ special featured reviews of Cloudwater Brew Co.
~ Heads-Up on Los Angeles Beer Events
~ Three suggested beers to buy this month. One light, one medium and one dark
~ A Book & A Beer reads IT from Stephen King
~ I will tap the Firkin and give my no holds barred opinion on the craft beer world.