Scrolling idly through Facebook posts, I ran across one that announced the winding down of the Taplister website/app. Barring a financial angel swooping in and saving it. For those who did not use it, Taplister was a crowdsourced source for what was on tap at bars and breweries. You could log in and find out what was pouring before you arrived at your barstool.

I was watching with a careful eye how Taplister and another website, BeerMenus looked and how often it updated and if and how much they would charge for access. The main reason for my interest is that I do a non-crowdsourced and more manual version of what Taplister was offering in the form of the Food GPS L.A. Beer Blast. And I alternated between thinking that crowdsourced would overrun what I was doing and then believing that it was better the old-fashioned (my) way.

But now I have come to the realization that although the look of the website and app is important, and the ease of use is important, plus accurate up-to-date tap lists is of paramount importance, they all fall in line behind how the creator/owner is making it a viable business.

Do you charge the customers for using? If so, then many in the interweb community will simply not use it. Because free is everywhere with a little poking around. Do you charge the bars or breweries? If so, then many publicans and brewers may opt out, leaving gaps that makes the service seem incomplete and leading to comments of “Why isn’t Bar A on the list?, they’re the best”.

You can use a combo of both or scramble for sponsors to cover costs. But in the end evaluation, is there a need for a constantly updating gargantuan list of tap lists? Enough to warrant charging for it? I don’t think so. Which leads to the question, What can and should be charged for if “everything” isn’t it?

Let me answer that by tackling the information itself. I am turning toward the viewpoint that a huge amount of data is less helpful. With curated lists being better in tune with what will be needed. There is a reason why listicles are popular. You take a vast swath of data and condense it into a list. A list is easy. Too easy most times without any goal other than as clickbait. That inherent flaw of throwing a list together without education, or worse, having the interwebs choose through voting has made actual curators more needed than ever before. And a curator can charge for expertise.

What is more valuable than microscopic coverage of a city or region and every beer on tap is a vetted list of which craft beer establishments you should spend your money at and what beer they are serving, compiled by someone or a group that has trust and knowledge. This opinion isn’t to toot the horn of the L.A. Beer Blast but it is an example of having people with craft beer experience in Los Angeles providing a snapshot of where craft beer fans really should go for their next pint. I would pay to hear and taste what people like Ryan Sweeney or Brian Lenzo or Steve Skorupa think I should have a glass of.

I see a future where we look to those with great taste to guide us to great beers and great breweries and not to a massive list of beers that is so large that it is debilitating. 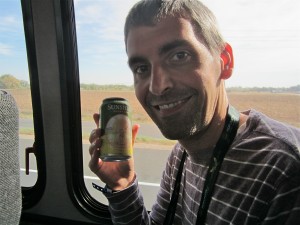 Started the day on a bus filled with New Belgium beer headed towards Fort Collins. BrewDad Mike secured us passes for a brewery visit and this is a tour like no other. 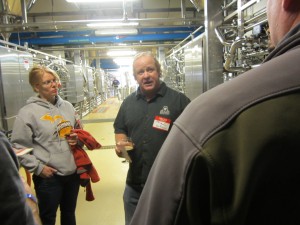 New Belgium is a huge campus. Really huge. Pipes everywhere. All labeled and all monitored by a computer straight out of Minority Report. And the place goes on and on. Our tour took us past three bars! And so much equipment. To wrap the kegs in plastic for shipping they used a big piece of metal that quickly encircled kegs in layers of plastic. There were labs and two story fermenters and foeders everywhere you looked. 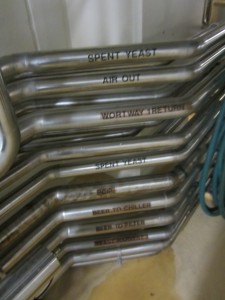 And the lunch was awesome. Great classy food with no pretension. Grilled cheese wedges with tomato soup. Peruvian chicken wings and other little nibbles like Belgian waffles to go with the beer. I went back for seconds and thirds.

We headed home after another beer and on to Freshcraft a new (to me) gastropub on Blake street for the Taplister relaunch. Great beer and a contingent of Portland folk (bloggers and beermongers) plus Joe from Ratebeer. As we were departing, Jeremy and Ting from Eagle Rock strolled in. That is one of the great things about Denver during the fest. Everywhere you stop, there is usually someone you know.

After Freshcraft were stops at Falling Rock (short due to it being it’s usual packed to the rafters self), Breckenridge (for food and a place to rest weary legs) and to cap the night a taxi ride out to Prost Brewing to try their German styled beer. The Pils being my favorite of the taster tray. 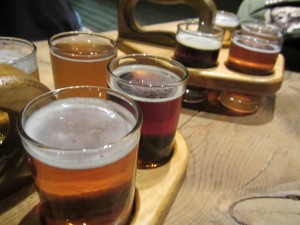 The beers are starting to blur together but onward I march to Saturday.

Blue Palms is a great place for LA Beer so I thought I would spotlight another great beer spot. As if Portland needed more places to go, Eastburn has come on the scent to provide beer and food (oh and wine too).

Eastburn should be on your list of Portland haunts or must see’s on your next visit to Beervana.

Taplister.com of Portland, OR was founded in February 2009 by tech and beer geeks, Kerry Finsand, Scott Wray, Ken Baer & Kevin Scaldeferri. With the singular goal of creating a community resource that helps you find what craft beers are on tap in Portland, Oregon. Taplister.com has achieved this by creating the first live beer search engine using the popular social network Twitter. Beer Fans can visit www.Taplister.com and search to see where their favorite beers are on tap. Mobile users can download the free iPhone app called Beer Signal or use the mobile version of Taplister.com to search for their favorite beers. In addition Taplister.com has installed Pubcams at EastBurn & Saraveza that displays a live feed of their tap boards on Taplister.com.