Now, to my eye, the six logo on the anniversary beer for MacLeod Ales looks a lot like the Trailblazer logo but with a bit lopped off. So I already like it. Factor in that this is a big Imperial Stout and I am hooked. Might make a trip to pick-up one of these boxes. 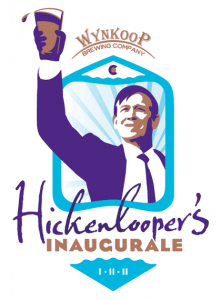 This new draft-only beer commemorates Wynkoop founder John Hickenlooper being sworn in as Governor of Colorado on January 11.

The beer will be sold at Wynkoop Brewing Company until they run out, and the brew will be offered at the official inauguration dinner on January 11 at Denver’s Fillmore Auditorium. I have never heard of that happening so another first for craft beer!

The beer is a mix of brown ale and winter warmer which is appropriate for the weather in Colorado and around the country. Sounds good to me. Their should be beers for special occasions all the time.