I fully expect to hear howls of protest.  How could you leave this beer off the list?  Why did you pick this beer?  You are just choosing beers based on internet rankings.  Your probably haven’t had these beers.  You get the idea.

If you want to start a discussion, then please comment.  I may not respond super quickly.  But I try to. I certainly hope that someone directs me to a beer that I haven’t had.  I may find a new favorite sour because of that.

But if you just want to scream or have your voice heard then please go out on your patio or back yard or balcony and do it.  If all you want to do is say, “you are wrong and stupid”  tell that to the wall.  Because that would accomplish the same thing as trolling a list of beers.

That is because we live in a time of plenty when it comes to craft beer.  10 different bloggers could come up with 10 equally great lists of sour beers.  And most readers would probably do as well.  There is no wrong list.  There is no right list.  It is just a list from one perspective as of this day.  Totally subject to change. 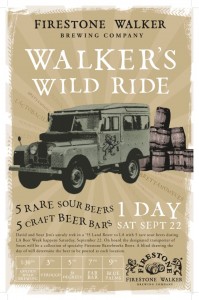 My favorite event from last year was the massive Deconstructed dinner put on by Firestone-Walker. Great beer and great food with a cool twist on their blended anniversary beer.

This year, they came up with yet another great hook for a beer event. They brought five sour beers to five different L.A. bars. Did not tell the bars which beer they had and then had David Walker drive the Firestone-Walker emblazoned rover from spot to spot to reveal which sour they had on tap. 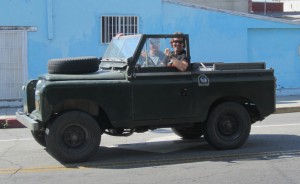 I skipped the first stop at Golden Road because the Better Weather Festival (to be reviewed later by my special westside correspondent) was in full swing. I headed for the Verdugo first and was treated to Lil Opal which poured a light yellow color and had a touch of tartness. And out on the patio after watching my Dad’s Oregon State team win over UCLA, was the full F-W entourage including brewer Matt Brynildson. 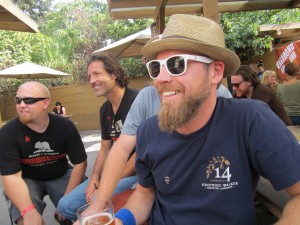 Then the next stop beckoned. While they headed to Alhambra and 38 Degrees, I jumped to the 4th stop, Far Bar. All because of a dirty hippie (aka, the 6th anniversary beer from Kern River) It’s good to have two beer events in one spot. Makes my job easier plus that Imperial Red is quite good and a beer you should search out. Notes of Citra hit the nose but the beer doesn’t try to tackle your palate. It is soft and strong. As the time approached for the 4th sour, many familiar beer geeks filed into the now expanded space on 1st for the reveal of SLOambic. 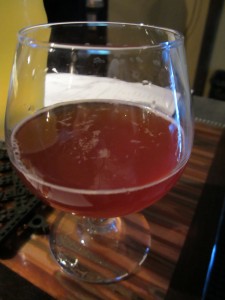 A red hued beauty with a light fruit taste and a nice bit of tart to it. Firestone sours are not the mouth contorting puckery kind but on a hot day where lighter beers seemed more appropriate, they really fit the bill and it was great to see the bar filled with snifters of the strawbeery in everyone’s hands.

Events can be hard to pull off. Events that involve L.A. traffic, a skosh harder. But this worked like clockwork. People could get one beer or all five. The taps flowed when promised and the group was more than willing to talk with everyone. It is a model L.A. Beer Week event. And whatever crazy idea they have for next year. I will be there. 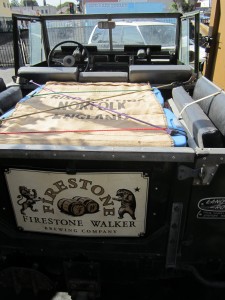 Then the rover was off to Blue Palms for it’s final stop.

If the Library Alehouse and their Sourfest wasn’t enough and you crave more puckery tartness in your life, then you have another opportunity! 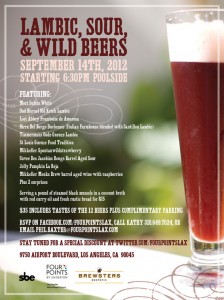 12 tasters of some classic sours and some weirdness from Mikkeller for under $3.00 a pop. That is a good deal.

If you want “A week’s worth of puckering, funky goodness.” then Sourfest 2012 starting September 4th and running until the 10th at the Library Alehouse is where you will need to be.

Here is the rundown of (dear God, how do I choose from this list) sours….

“We’ll kick things off with Locals Only Night on September 4th at 6PM. Expect some special pairings for the evening along with the following on tap (subject to change):”

“We’ll cycle in the rest of the list as the week progresses, offering six ounce pours of all available beers in addition to full pours, so you can sample responsibly.”

Here is the topic from this month’s host, The Brew Site…..

“…we’ve had Sessions covering Summer Beers, Fruit Beers, and Wheat Beers already (all which could suitably cover summertime beer enjoyment), it occurred to me that the topic of Sour Beers fits well within the season and (surprisingly!) hasn’t come up yet.

I’ve been gradually exploring Sour Beer and finding myself seeking out and trying various beers which fit into the “sour” realm (yes, I’m purposefully avoiding the word “style” here as it is entirely too loaded): beers inoculated with wild yeasts, soured with fruit (often in conjunction with those wild yeasts and barrel-aging), lactic acid beers like Berliner Weisse-influenced beers and the rare Gose, and so on. It’s a challenging area, both in acquiring a taste for soured beer and in brewing them—fortunately many brewers are being adventurous and branching out these days, giving us many more options.

So that’s our topic for August: Sour Beer…..”

We are not talking this type of sour….. 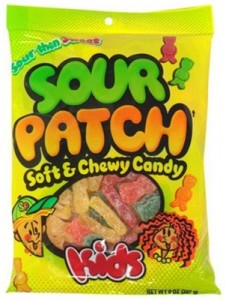 …we’re talking about what I consider the final step in complete craft beer immersion.

If you are not scared off by sour, if you have Festina Peche in your ‘fridge like I do right now or you attend SourFest at Stone in California or Puckerfest at Belmont Station in Portland then you have probably tried the length and breadth of the craft beer world.

You are truly assimilated into this culture because, in my mind, sour beer is truly the farthest from the industrial water lager as you can go. DIPA’s and Whiskey barreled beers may take getting used to but they have an essential beer-ness that newbies can still readily identify (even if they are put off by the taste). Sours don’t do that. That is a major generalization but think about it. Most people have had a Guinness so they can take that experience and apply it to Stone’s Russian Imperial Stout like connecting one actor to Kevin Bacon in a few steps. Ballast Point’s Sculpin is a bitter bomb but even PBR drinkers could make the leap from their fizzy, yellow beer to it.

Sours have no easy beer or alcoholic touchstones that your sense memory can use to link up. Wines are tannic or sparkly but sour no. Cocktails come close but the most popular tend away from sour. So you truly are a blank slate when you start exploring the world of tartness. And if that isn’t enough to make sours one of the last beers that people get obsessed with, then the price of some of them surely will. A Cascade Kriek (excellent beer by the way) is going to set you back some coin. Consumers will pick-up many other brews before that because of the cost.

One more thing sets the sours as the final frontier. Fruit. Beers made with fruit are overcoming the stigma of being the “light” version. But much like cans being re-cast as a container for not only crappy beer, true beer nerds do not see fruit as wimpy. And lo and behold you can end up with a sour flavored with prickly pears.

All of us who have been initiated into the club of sour beer need to push, pull and cajole the others into it so that, one day, we will look back and see everyone alternating between IPA’s, cask ales and sours as if there were absolutely nothing amiss at all.

My beer buddy Richard and I traveled to Escondido for the pleasure of puckery sour beer at Stone Brewing. And at 10am no less.

We arrived and quickly received are elegant sampler glasses, our 15 taster tickets and the menu….. 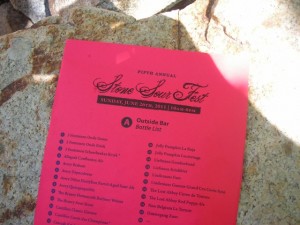 I started with Sang Royal from famed (and often mentioned on this blog) Cascade Brewery in Portland which had (6) sours on the menu. Of which I sampled two. The Vine with it’s big white grape taste and milder acidity was my favorite. We found a rock wall to sit on at the lowest level and plotted our sour choices on the sunny day… 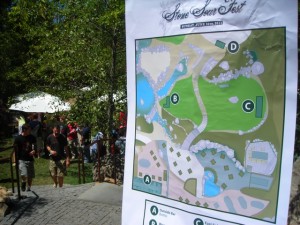 My plan was to alternate between fruit sours and barrel aged sours. Mostly to keep the acidity level in check. (Even though I brought some Tums in case). And because there were so many choices, 53 on tap plus 49 bottles, it was easy to do. 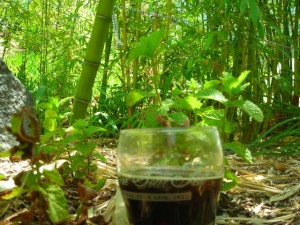 There were only a couple of duds in the 11 that I sampled but they were far outweighed by two from Cantillon that were simply amazing. The Lou Pepe Kriek and the Iris. 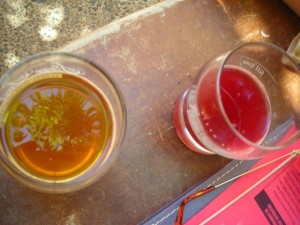 The kriek was like a spiced cherry pie. It was a cloudy red with excellent aroma. My number one choice of the day.

If you went this year or last, what were your favorites?