Sad to say but the biblically inspired Shmaltz Brewing Company will be no more. But before they go, they will leave us with an exit beer which I think is a really cool idea. The fact that they made it to 25 years is a testament to their perseverance.

Shmaltz Brewing Company, they of the He’Brew beers amongst other beverages was a contract brewing holdout. Until five years ago, they did not have a home base. Now they have returned to their gypsy ways with the sale of its brewing equipment to Singlecut Beersmiths of Queens, NY.

The facility in Clifton Park will switch over later this year and the 30,000-barrel brewery will start brewing new beer. I had some of their beers when in NYC and was quite happy with them so this sounds positive if more beer will make it to L.A.

For Shmaltz this seems to be a strategic retreat and a way to not fall deeper into debt. And perhaps they are a brand that is better suited to not having their own brewery. Whether they can re-kindle brewing agreements again or if that tank space is gone is a different story.

I do see more equipment and facilities coming available for those who want to grow. Or those bigger facilities can become incubators or homes for excess capacity needs because that is probably needed more, flexible brewing. 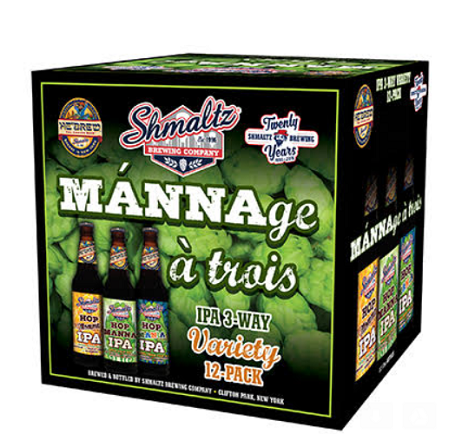 Shmaltz Brewing Company has created a hop driven variety pack anchored by their Hop Manna IPA with the addition of two new Shmaltz IPAs for 2016, Hop Momma and Hop Mania which will start showing up in March/April of this year.

The MANNAge à trois variety pack beers are (starting with the newbies):

…and the returning IPA….
Hop MANNA® (65 IBUs, 6.8% ABV): Dry-hopped with Centennial, Cascade and Citra for a fruity aroma with lively floral and citrus flavors. Shmaltz’s first-ever single IPA, Hop MANNA® offers session after session of hop nourishment from the Shmaltz Tribe to yours.

I am left to wonder though, why the Jewishness is missing from the two new names. Hop Mania could be any Imperial IPA. I will endeavor to think of better mash-ups of hops and religion.