Wanna know what fun and super low ABV beers were being offered at the 2019 version of Session Fest? Well, read on…

…and that was just the inside tap list. There were still beers outside to try. Let’s get the bad news out of the way first. I was excited to see Brewery Draconum on the list. This is a brewery on my to visit list and their Kolsch did not strike me well. Tasted kind of green and un-kolsch-y. I also had a Mexican lager from Absolution and it was another below par performer from that Torrance brewery.

On the positive side of the ledger, the Malty AF from host Eagle Rock was a delight. Doubt it would sell in a 16oz can but it was as name suggested a dive into malt. Loved it. The other winner for me (unsurpisingly) was from Cellador. Their Famille is a past Food GPS Beer of the Week and it was delicious. Tart and earthy and malty and fun.

I really like this festival because of the depth of beers. There is a deep bench of beer styles that are not seen and this event showcases them. It may not be as sexy as a DIPA Fest but the true craft believers will find themselves at this event.

Get out your calendar, and mark down the 2018 version of Eagle Rock’s Session Fest… 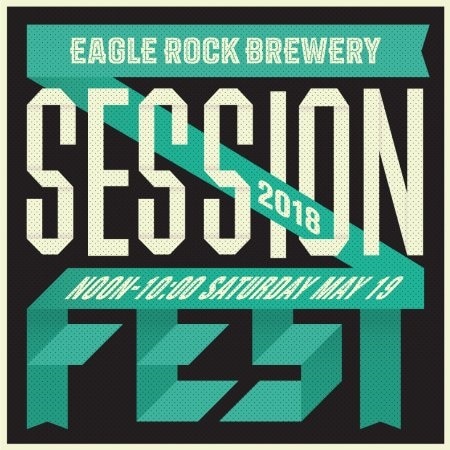 For those who (criminally) still have attended, Session Fest is a beer festival dedicated solely to brews under 5.0% ABV. All of the beers are brewed by ERB employees (from both locations).

You will be surprised by how “Big” tasting these small beers are.

Tickets are available for pre-sale for $25 HERE or for $30 at the door. You will receive a commemorative Session Fest glass and an 8oz pour of 5 of the special beers!

A few days have passed since one of my favorite L.A. craft beer events, the Session Fest at Eagle Rock Brewery, so time for some photos and some notes on what I tasted which is a lot harder than it seems because you can’t just start with the lowest ABV and work your way up. Plus there were so many different beers that you couldn’t just focus on hoppy or fruity. 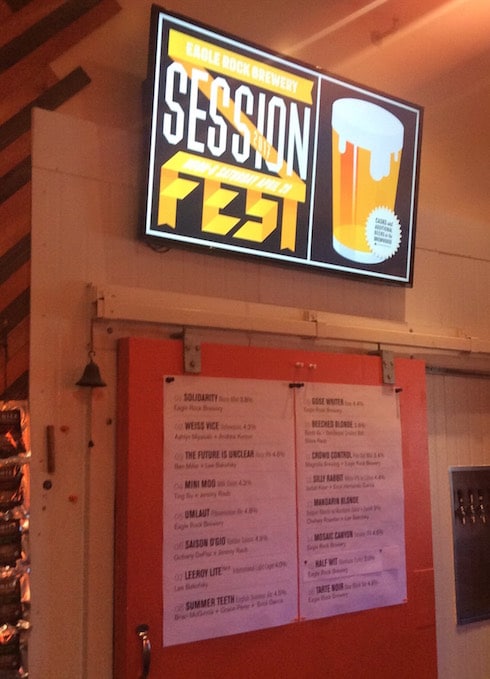 Leeroy Light – an ode to to light beer that poured a bright yellow. Silky and smooth.
Sparkle Brew – Yup, this would be the red beer. One of the ingredients being magic. Had some berry notes to it also some butter on the back end. 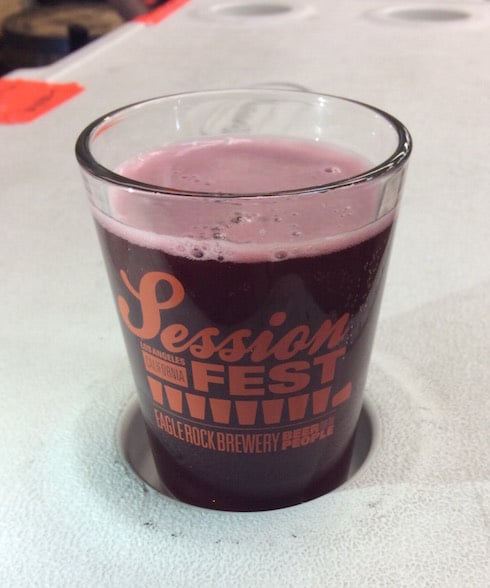 Silly Rabbit – I did not get a Trix aroma off this and not much citrus either but if I saw it again, I would order it. A simple nice low hopped beer.
The Future is Unclear – This was like their recent Juice Pop IPA, just lighter. Category creator? Session NE? 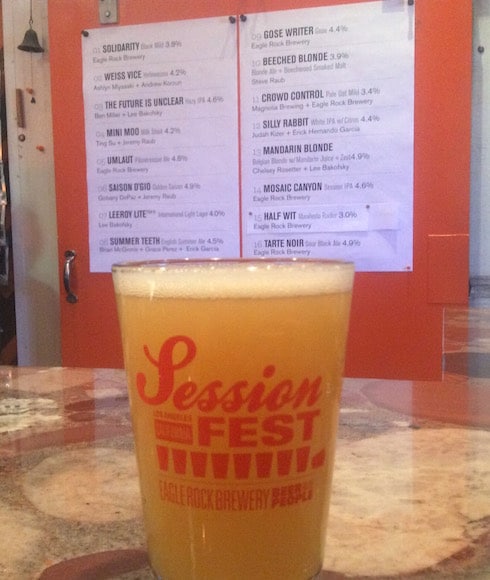 Half Wit – Big on grapefruit. Pretty pink muddy color to what was called a breakfast beer. Will more Radlers hit this summer for Angeleno’s?
Anything You Can Do – This is better on nitro but tasting on cask shows how really good this beer is. I hope this gets canned
Monteverde Lemonade – The most unique beer of the Fest. Sprig of mint included is a cool touch. Like a light Limoncello. 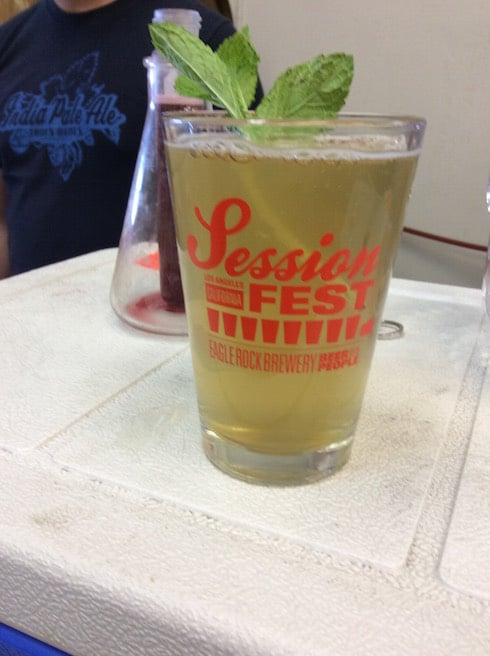 I missed Umlaut with lager yeast. The Lupulin Denial Gruit and the Beechwood smoked beer. I was glad to to see that cask ale was offered and was quite happy to see so many beers under 4%. Such a great fest. Make plans to attend next year. 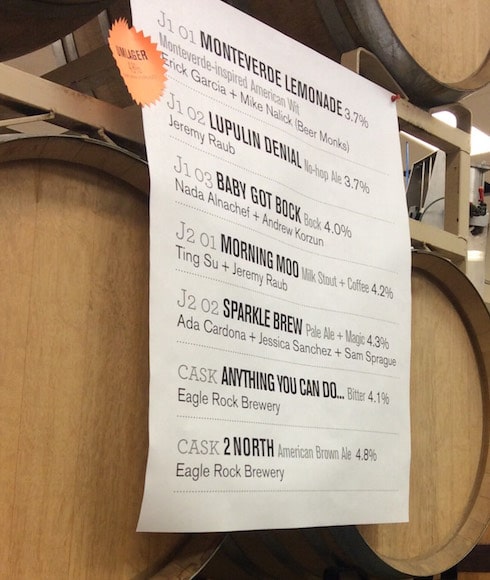 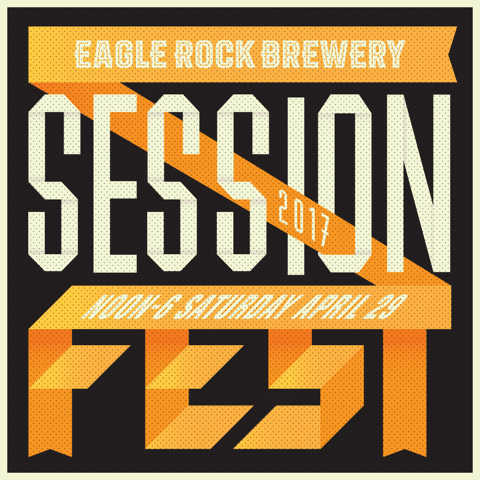 One of my favorite festivals enters its seventh year, Session Fest presented by Eagle Rock Brewery has ZERO beer over 5.0% ABV but all have 100% creativity. This year it will be held on Saturday, April 29 from noon to 6pm.

The beers are “brewed by ERB and Eagle Rock Public House employees. Paired up with brewers on the team, the whole staff gets a chance to fully experience the process of making the beers they sell in the taproom.”

Tickets include commemorative half pint glassware + 5 beer pours. $25 early bird, $30 at the door. Must be 21+ to attend.

Last Sunday, Eagle Rockbrought together an eclectic group of brewers all with the task of brewing low ABV beers. The rain from previous days might have scared people away but it was bright & sunny and the beers were flowing with special guests like Mark Jilg of Craftsman, Mumford, MacLeod, photographer to the beer starts Bernie Wire and others. I will tell you my favorites but first some photos from the day…. 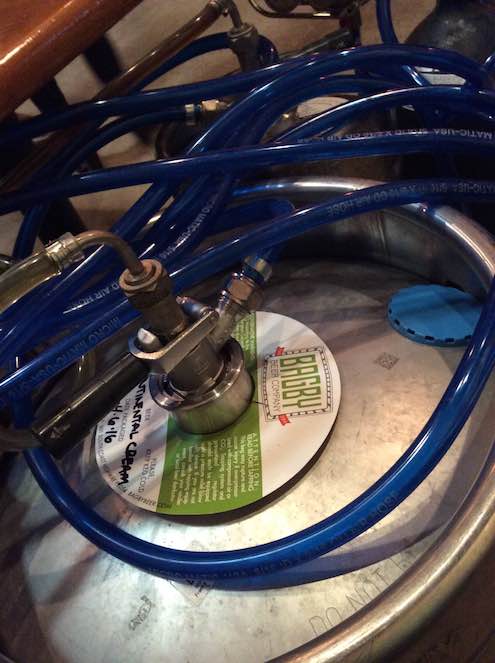 I started the afternoon with a milk stout from Eagle Rock which was quite roasty but not as sweet as expected. After an exchange of pleasantries with Mark Jilg, I sampled his Craftsman Get Off My Lawn IPA which was a bit cloudy and more of a pale but a nice change in IPA flavor. Next came my favorite the HenHouse oyster stout which had a really nice savory note and a touch of saline. That was followed by the Eagle Rock Baja Weisse which was like a margarita beer. All fruity and light and probably my close second favorite. I also tasted a brown ale from Sanctum which was fine but nothing really leaped out from it and then finished the afternoon with the Saisonetta from Arts District. That beer was better than my recent tastes of ADBC beers which is a positive sign. 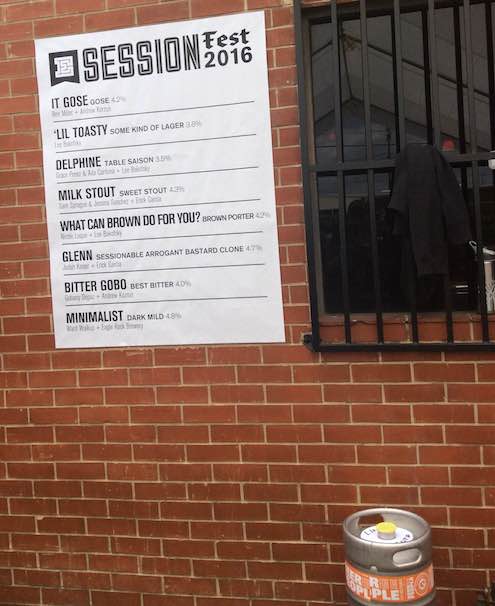 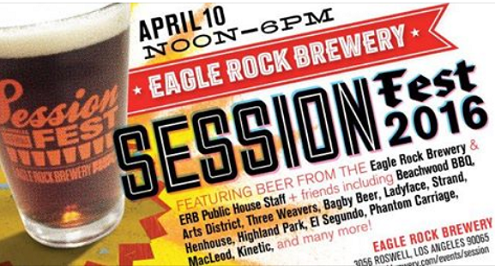 Ready to get your Session on?

In the early years of Session Fest, it was just Eagle Rock pumping out a crazy amount of weird lighter ABV beers. Last year’s Betelguse beer made with bugs being a good example. But this year, the field is wide open with Bagby and Ladyface and even the Public House location of ERB in on the action. Plus many others.

Photos and beer favorites to follow but I hope you are there too!

Everyone has their favorite yearly beer event, for me it is Session Fest from Eagle Rock Brewery. 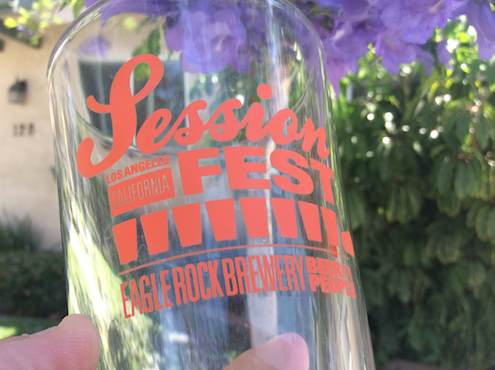 Here are my thoughts and photos of the 4th annual…..

This year there were 26 taps a pouring according to Ting Su whose Bitter Ting was a hoppy English bitter.  There were guest taps this year like the medal winning Torque from Kinetic and the two guest taps that I sampled, Saisonita from Monkish and Oats of Birmingham from the Brewery at Abigaile’s. It was a wide ranging guest tap list, all to help benefit the LA Brewers Guild. 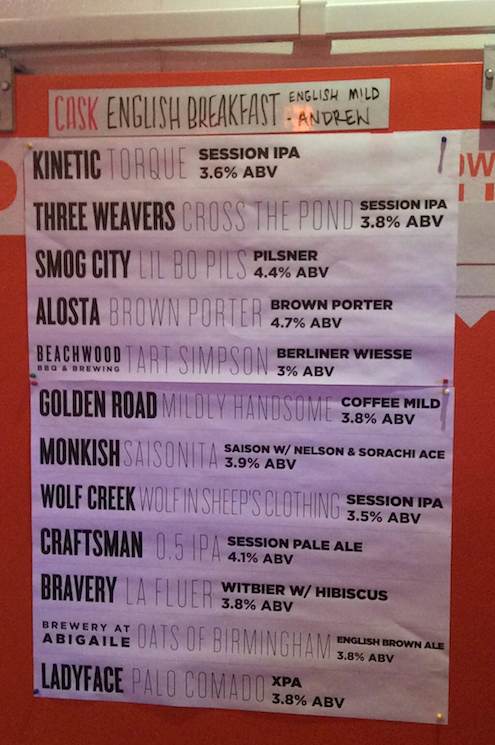 Last year might have had crazier ingredients but I was introduced to a PaterBier and the smokiest, hammiest Gratzer this year from the Eagle Rock side.  Plus the layout made getting beer even more easier without waiting in line.  All of the guest taps were in the main taproom with the Eagle Rock 12 being in the brewery itself.

In my personal best of show, it was a close call but the Texas Brown won by a nose over the Radler with bitter orange.  The brown was hopped up but it didn’t lose it’s base style  under a hop onslaught.  The Radler was delicious and the orange was great but it was a bit too soda-y for me to vote it as the best.  Third place of the Eagle Rock brews would be the English Breakfast.  English traditional meets hops.  The winner for prettiest goes to the hibiscus tinged Hop A Feel Session IPA which poured a pretty pink. It also tasted great but the aroma was missing and would have tied it all together in a bow.

It is great to go to a fest where I don’t have to worry so much about the ABV.  Yes, you do have to pace yourself but it is much easier to kick back and enjoy a Session without having to be always asking the server how much alcohol is in this one.  Plus it encourages much more experimentation because you have that room.  If I have one 11% beer, I may miss two or more beers because I need to slow down.  Here, you can sip away. 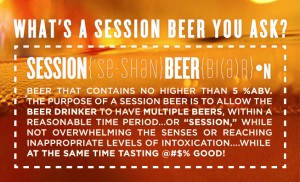 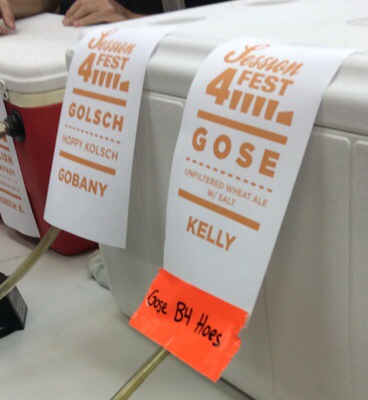 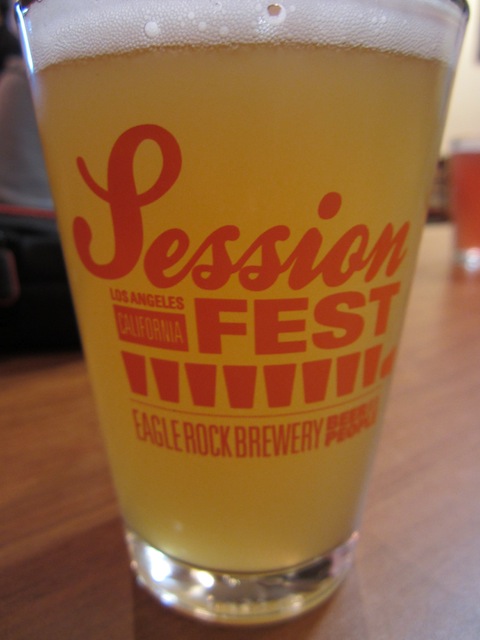 One of my favorite events on the Los Angeles beer calendar is the Session Fest at Eagle Rock Brewery.  And it is back in it’s 3rd iteration!  From 4pm to 10pm on May 4th.  Here is the news feed from their website…..

“Session Fest is all about great tasting beers that don’t get you blitzed. All your favorite brewery staff will be brewing up some special session-style beers to share with you. We’re currently mashing, hopping, fermenting and working our butts off to ensure some deliciousness not to be missed!

This year for just $15 you’ll be able to get 3 beers and a half pint commemorative Session Fest pint glass to take home with you!

Additional drink tickets will be available to purchase as well.

We’ll have a food truck in the lot also and we’ll let you know who once we have it all worked out.”

On Saturday, starting at 4pm is one of the most unique beer events in Los Angeles. The Eagle Rock Brewery Session Fest. 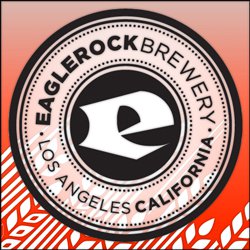 “Session Fest is coming back! All our taps will be pouring unique pilot batches of beers 4.5% ABV or lower brewed by the Eagle Rock Staff. Low on alcohol, but big on flavor. It was a hit last year, come and see what we brewed up this year! Grill’em All Truck will be here to feed ya!”

This is a great fest that really showcases creativity and maximizing flavors. The range of styles last year was amazing and this years brews will probably yield a great many tasty beers.