Boak and Bailey are the hosts for June and….”The topic we’ve chosen is traditional beer mixes.

Lightplater – bitter and light ale.
Mother-in-law — old and bitter.
Granny — old and mild.
Boilermaker — brown and mild.
Blacksmith –stout and barley wine.
Half-and-half – bitter and stout, or bitter and mild.
We’d like you to drink one or more from that list and write about it on Friday 6 June… and that’s it.

We’re deliberately aiming for something broad and accessible, but there is one rule — no ‘beer cocktails’! It’s been done, for starters. So, mix two beers, not four; and steer clear of syrups, spirits, flavourings and crushed ice.”

So, I hemmed and hawed as to which mix I would like to do and I eventually chose the Boilermaker. But instead of going the English beer route, I chose all California. And then in a move that the purists may decry, I chose a dark mild to pair with the brown. Why? Because recently Eagle Rock Brewery has offered blends before to success, most notably their IPA and Winter Warmer combo, Populee. So, I felt justified in making a darker, more Dashiell Hammett / James Ellroy version of a beer only Boilermaker.

First though, I sampled both separately to get my bearings straight before the experiment. The Davy Brown had a cedar aroma and light quaffable bit of hop to it. Brown but not malty or nutty. Solidarity is a dark black with cocoa powder and a viscous taste to it. All the while being 2.2% less in ABV.

The resulting blend takes the light bubbles and the cocoa powder and puts them center stage. The expressive flavor of the Dark Mild with the palate cleansing of the brown. With the brown taking more of a starring role overall.

That led me to tweak the percentages on glass #2 and amp up the Mild more to get a little more of the chocolate involved. But despite upping the percentages, the story remained the same. The brown ale which seemingly was the weaker came out on top. That was a fascinating development.

I don’t know if I would order something similar but this session has made it clear that mixing is something that should be looked at more carefully. Maybe I will try the Mother-in-Law the next time I see my wife’s parents. 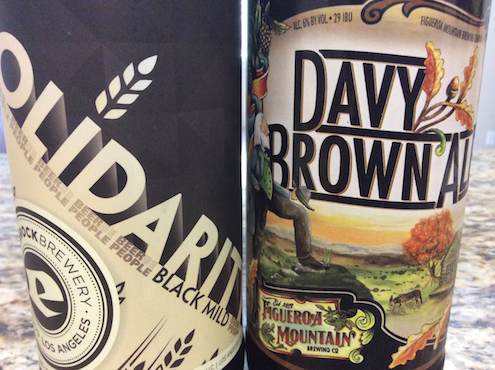