Who here hasn’t been on this list at some point this year? But maybe it isn’t such a bad place to be if there is a Victory barrel-aged beer available for you. I think 11% abv will leas to more naughty, not less.

I just saw a photo of the bottle for the fifth batch of the Duvel Barrel Aged series. It has all sorts of fun design touches from the box, to the etching in the glass, the little sticker over the cap. Not to mention the beer inside. Here are those details: “ Duvel master brewer Hedwig Neven wanted to reinvent the ‘barrel aged’ concept and went looking for a rum distillery instead of bourbon barrels. He found it on the other side of the ocean, in Barbados, a world away from the brewery in Puurs: The West Indies Rum Distillery.”

If only it would come stateside.

This month I have a second cool label, this one from Green Cheek in Anaheim.

Such a cool name and the color scheme works really well and knowing brewer Evan, this will be a heck of a beer.

I recently selected a Rum accented barleywine for a “hypothetical” taster tray from Le Castor and now, one a little closer to home is on the horizon from AleSmith. I love seeing anything barrel-aged that isn’t whiskey or bourbon. + love the pun name. 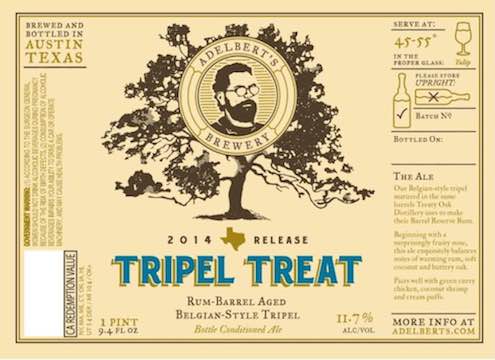 Not Triple Threat but Tripel Treat.  The ocular one on the Adelbert’s Brewery label has come up with a tripel in rum barrels.  I know bourbon and whiskey are the norm (and quite good) but I always appreciate when a different spirit is used.  And since, LA gets a stray Adelbert deliveries, I might just see this one on a shelf.

If you enjoyed the cans of Maui Brewing’s CoCoNut porter then this might pique your interest. They have a version aged in RUM barrels!