When you think of Rogue Ales, I want you to think lodging too.

That’s right. You can stay at their B&B in coastal Oregon or at their micro-hop farm in Independence, Oregon. And all for pretty cheap.

Here is the address:
Chatoe Rogue Micro Hopyard, 3590 Wigrich Road, Independence, Ore.; 503-347-8288
For more information follow this LINK to their website
Double rooms at the house on this hops farm start at $90 per night. 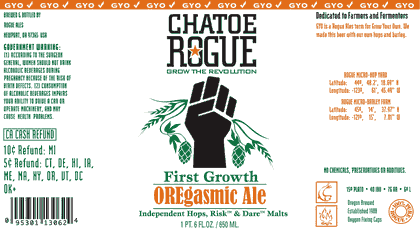 The Chatoe line keeps rolling along with the OREgasmic. Truly local beer this is. This is part of what the RogueNation is saying about it…”2010 Chatoe Rogue products will use Rogue Micro Farms’ Independence, Revolution, Liberty, Freedom, Newport, Rebel and Alluvial hops from the Wigrich Appellation and Dare, Risk and Dream malts from the Tygh Valley Appellation. Chatoe products will include Pinot Envy Ale, Dirtoir Ale, Single Malt Ale, and OREgasmic Ale.”

Chatoe Rogue, a new offshoot label of the brewery, has announced its flagship brew Wet Hop Ale as the first brew of a series set for release in 2010.

And you guessed it, wet hops are the star of this beer; a 200-barrel brew is made with 3,000 pounds of wet, First-Growth hops.

These hops are brewed the same day they leave the ground, and then they are blended, bottled, and kegged by Rogue brewmaster, John Maier. Each of Chatoe Rogue’s products, all First-Growth GYO Certified, will use hops from Rogue’s Micro Hop yard.

Wet Hop Ale is made with Independence and Revolution hops, but the label also promises a Pinot Envy Ale, a Dirtoir Ale, a Single Malt Ale, and an OREgasmic Ale that will assuredly have big shoes to fill.

Rogue is really amping things up. First they do the John-John line of beers and the Sesquicentennial beers and now this!

From the makers of Rogue Ales comes Track Town! I have had Track Town ales before and found them to be different in style and flavor than their Rogue cousins. So when I saw Honey Orange Wheat, I had to pick it up.

Here is the instant review…..
[youtube=http://www.youtube.com/watch?v=bnijhiYi3wo]

I’ve got (2) Rogue beers waiting their turn to be tried. First is the Track Town Honey Orange and then I will have some Portland Sesquicentennial.

Thanks to the advice of Tomm Carroll, I checked out BoHo in Hollywood. Open since March of this year, it is a odd spot. Great big picture window but on the inside it is eclectic old boy’s club / library. Very interesting and very busy.

I had two vastly different beers. First off was Dogfish Head’s 90 Minute IPA. Very interesting. This is a strange observation to make but it tasted thick but not in a stout or porter way. Not something that you drink fast. For an IPA, not a hoppy aroma or taste but you can really tell you are drinking a big beer. I will have to taste the 60 minute to compare.

Secondly was the Rogue Chocolate stout. Oh was this good. Great Aroma of chocolate and malt. I could spend hours just taking in this great smell. And it was so easy to drink. This is a really good beer. Great with dessert.