According to the Surfrider Foundation, “AB 962 would create a returnable bottle system in California and preserve bottles so that they can be washed and refilled by beverage producers rather than being crushed for recycling. It would also allow for returnable bottles to flow through the state’s Beverage Container Recycling Program (CRV/Bottle Bill). This bill would even the playing field between bottle washers and recyclers by paying the same amount.”

Granted we can do more but every little step helps. I don’t think we will ever hit the heights of growlers back in the early days but maybe we can get a return a bottle, buy a bottle going.

Craft brewing is about creativity and we need that creativity brought by people like Local Plastic at every business step of a brewery. With the massive spike in to-go 4 and 6 packs, we need to find ways to think about making this better. Like these cardboardy holders from Highland Park Brewery.

Wouldn’t it be cool to see a large recycling bin like this?

Of course, for breweries it would need to be a rendition of a 16oz can but I would love to see recycling and art to meet at each and every LA brewery.

One side effect of buying pretty much nothing but 4-packs is that you create quite the colorful collection of snap-tight plastic can holders. Maybe you have been recycling them but another way to help the green new deal is to return them to a brewery. Boomtown recently messaged how they would take them and I have seen that Common Space has a collection box too. Call or message first for other breweries but let’s all pitch in.

Wow, this is a cool upcycling article. Considering that the sheer amount of cows are considered a “tiny” bit of our ecosystem problems having an alternative way to use spent grain will become much needed and to use it in new ways like this will become increasingly important as our brewery count still has a bit of upwards trajectory to it. Makes you wonder what other uses can be found.

I have seen Ecover products in multiple stores but I have not seen this new cleaner from the Belgian company. It is a “washing up liquid” that is “partly made from beer waste.”

I will be looking for this on shelves.

I think this is so cool that I had to give credit to the original Tweeter. Yeah, there are rules but I think that a lot of bottles fit the bill and this really makes a difference. Kudos to Bayern Brewing!

It seems that states are having to take the environmental lead in this day and age and that continues as the Oregon Beverage Recycling Cooperative with seven Oregon breweries will begin testing a reusable beer bottle program. 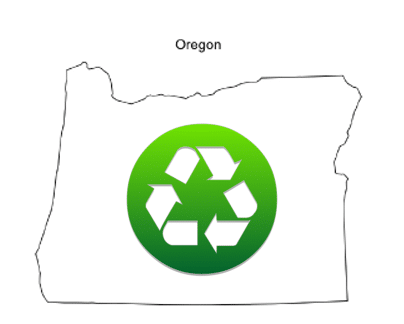 The Oregon Bottle Bill is already a strong program but this adds another layer that other states will need to catch-up with. New, stronger bottles are being made of (you, guessed it) old recycled bottles.

If you locked a Republican, a Democrat and a voter in a room, within minutes the voter might strangle the politicians just to escape.

But in the world of recycling and craft beer, though the discourse may not be as civil as in other brewing aspects, it still does push and prod people forward instead of just punting problems down the field. And three yard gains and a lot of work shouldn’t be derided because you were hoping for a punt return for a touchdown.

In a recent New Republic article, you get to see the why of how to package cans together and the different avenues that craft breweries take. No matter your stand on this issue, the fact that each camp is going forward in an attempt to make things better is the key take-away. The ubiquitous clear rings that grace sodas, ABSABINBEVMILL and some craft beers were once seen as dangerous because the rings could get caught on wildlife or float out on the ocean never to disappear. But to read that they are trying to make these rings photodegradeable is heartening. The manufacturers could just keep selling the old ones and not apologize (like politicians) but they are choosing to make things at least a little better. And those who pooh-pooh it as not enough are missing the point. We should encourage them to make them better, however incrementally. You shouldn’t stop 10 tiny steps in the right direction because you want 1 larger step.

As with foods that one day are great for you and the next day are killing you, the recycling news lately has been pretty negative. And it seems that those who want to save the earth are the ones making people feel bad because the recycling isn’t as green as thought to be. A goal that can be reached toward is what needs to be enouraged. Not just a drumbeat of low numbers and lack of progress.

So let’s recycle whatever is thrown at us be it rings, covers or boxes. What we throw into our bins may not all get to recycle Valhalla, but it is better than nothing. And if your city (and mine) aren’t doing their part, then come voting time, get someone in office who can fix it. Or improve it, piece by piece.

If they can make a shirt out of milk, then why not paper out of beer? And not just any beer, from the spent barley of famed Upland Beer in Indiana. 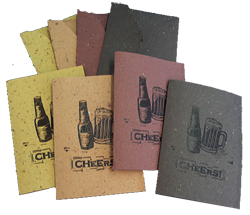 Here are the details from Twisted Limb paper:
“Cheers! woodcut by Darian Goldin Stahl on front of card. Text on the back of card lets receiver know the special ingredient and beer name. Cards include matching handmade beer paper envelopes.

Colors match your favorite beers–wheat, pilsner, amber, and porter. Set of four cards and envelopes includes one card in each of the four beer colors.