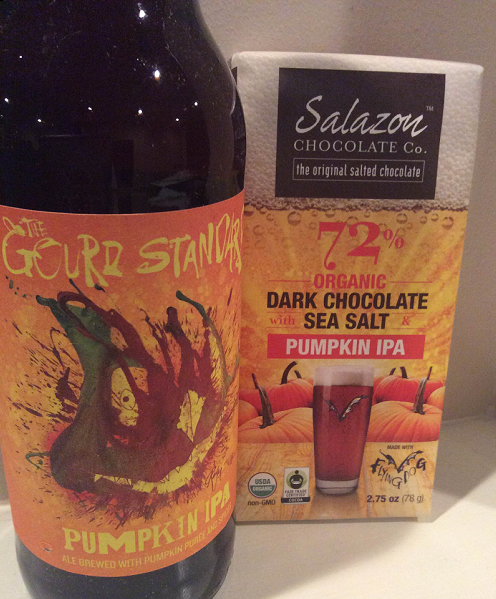 I can be flexible at times. Case in point pumpkin beer. If you are a seasonal creeper, I ain’t got time for you. If it is after September 15th (preferably later) and you aren’t just doing some pie spice seasonal, then I will listen.

Toss in a high quality chocolate bar version of the beer and send me both and I will perk my ears up. Salazon Chocolate teamed with Flying Dog Brewery to do just that.

Here is the review: let’s start with the chocolate. Damn this has a lot going on. There is a rich dark chocolate base, salt kicks in as you as does a green hop bitterness that I had a hard time separating from the chocolate. But the subtle shades of each do show when you focus on it. I can’t pick up pumpkin notes but that is because the one-two bitter punch is just too strong. The beer has no pumpkin problem. I get more gourd than pie spice from the dark amber Maryland brew and it surprisingly works with the restrained hops that are used. The balance is quite well done. It’s not just a pumpkin ale with some hops added in.

I came in thinking that ate least the chocolate would be good but the beer is excellent. I don’t know if I would recommend sampling both together because the dark chocolate is just too bitter and rich. My palate needed water before I could fully enjoy the beer. Which I did.