Former Portland Trailblazer forward Brian Grant has collaborated with Portland brewery Von Ebert to release a beer benefitting his foundation, Rasta Monsta is set to be released at the Blazers home court, Moda Center near the end of this basketball season, starting March 30th.

Rasta Monsta will be the first beer done by Grant but Von Ebert has been helping his Pints for Parkinsons cause in the past.

The Brian Grant Foundation seeks to “help improve the well-being of people with Parkinson’s,” and one of the ways it has done that in the past is via its Pints for Parkinson’s fundraiser, which featured a beer passport.

Von Ebert describes the beer as having “notes of guava, overripe mango, and a touch of pineapple, with a crisp malt backbone holding it all together.”

I have listened and now watched on YouTube the final seconds of Portland’s one and only NBA championship win many times and with Bill Schonely, the voice and totem of the Trailblazers retiring, I wish that I could find this beer….

Three cheers for The Schonz!

No, this is not an NBA blog but part of the reason that beer is part of my story is because I am from Portland and Portland is inextricably tied to the Blazers and currently the health of Damian Lillard’s abdomen.

Which means a kinda-sorta-no good season needed some action to set-up next year, replenish draft picks or to at least avoid the luxury tax.

The latter being why the trigger was pulled to trade forwards Norman Powell and Robert Covington to the Los Angeles Clippers for guard Eric Bledsoe, forward Justise Winslow, and guard Keon Johnson. The Blazers will also receive a second-round pick and a trade exception in the deal.

Then, the big deal came down on Tuesday, CJ McCollum being traded to the New Orleans Pelicans for forward Josh Hart, guards Nickeil Alexander-Walker, Tomas Satoransky and draft compensation.

We then turned around and sent Alexander-Walker and Satoransky away to the Jazz and Spurs respectively and received back more picks and currently injured three point specialist Joe Ingles.

I think that Hart and Ingles have the most current upside with Johnson and having future upside. The draft picks will require some mining to find something but if the plan is to go young, the process has begun.

The beer link is community. As the Blazers do well, more people go to games, buy merch like the pint glass above, there is a spring in the step of fans and non-fans alike. You see Blazer themed beers popping up more. People head to sports bars, especially if there is a deep playoff run. You hear cheering outside your window. I have seen that joy as both the Dodgers and Rams have had recent success.

The Rising Tide maxim becomes plainly clear. Community matters and we need more of it whether it is basketball or IPAs.

Time to dig into early season NBA basketball and my favorite team, the Portland Trailblazers. What better way to dissect each game and player? Jacked Ramsays.

For those who have yet to join the Blazer Bandwagon, Jack Ramsay was the coach when Portland won its only NBA championship in 1977.

Host Danny Marang talks all things Blazers from recaps of games to interviews with players. Hopefully, this season won’t be as up and down as the past few but then again, a podcast about a team that never loses would get old, right?

For the beer to pair with it, you could choose one associated with new coach Chauncey Billups or a Philly special since Portland is a rumored destination for disgruntled 76er defensive star, Ben Simmons.

But let’s throwback like the City Edition jersey and scream Rip City with a Riip Beer Co. beer from Huntington Beach. Order up a Krimson Killa Red Ale as Logo Lillard hits another deep three to down the Lakers.

According to the Blazer page on NBA.com, “This first of its kind partnership includes co-branded merchandise with Great Notion’s skeleton character, Moss, on hats, t-shirts and crew neck sweatshirts. Additionally, Great Notion customers have the potential to receive access to exclusive discounts on tickets to future Trail Blazers games. Fans will also get the opportunity to try multiple Great Notion beers at the annual Rip City Ale Fest slated for later this year. More information will be shared about Ale Fest soon.”

The Portland Trailblazers had the 16th and 46th picks in this year’s NBA Draft. A draft considered thin at the top but with potential gems of prospects. Then Robert Covington happened and suddenly we Blazer fans got some depth and defense that we could really use.

That means I get to highlight a couple Palouse breweries that you could visit if you happen to be in Pullman.

Now it is time to dream of NBA success in the shortened 20/21 season.

The NBA season was steamrolled by the virus but that may have been for the best considering how my beloved Blazers were struggling and it gave time for Deschutes to craft a new lager with the red and black color scheme to prepare for the draft.

Late Thursday night, while I was enjoying pizza and Beachwood beers at We’re Pouring, my beloved (and often shouted at) Portland Trailblazers made their pick in the 2019 NBA Draft. I know that free agents and who can be afforded is of more importance but let’s get to know….

Maybe Little Beast could create a North Carolina Paw Paw sour called Nassir. I don’t know how he will impact the team, especially with last year’s pick Gary Trent Jr. in front of him.

I want to congratulate the Portland Trailblazers on making the Western Conference Finals!! That is a huge accomplishment. You can say that they were in the “easy” bracket but neither the Thunder or Nuggets were “easy”. Yeah, the Thunder and Paul George have no idea what a good shot is and the Nugs were a little too sassy but having to win on a last shot and survive four overtimes is tough.

You may ask what this has to beer. Well, I have a few pieces of glassware that is bedecked with Blazers past and logos past and it is playoff time when I dust it off and start pouring beer into them again. Last year, I had to put them away all too quickly but this year, they will be out for a nice long spell. And though they are not beer glasses, the beer tastes real good after a win nonetheless. 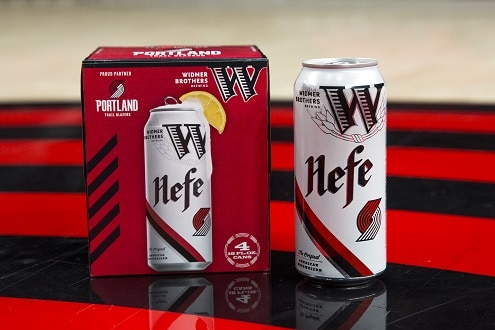 The usual inconsistent Blazers have shown up for the 2018/19 season. As prone to a three loss streak as they are to the flipped version. But what is not inconsistent is the classic Widmer Hefeweizen who has teamed up with my hometown team and will have 16oz cans bedecked with the Blazer logo on them.

From December 3 through the end of the 2018-2019 NBA season, the limited edition 16-ounce cans will be available Widmer Brothers’ North Portland pub, the Moda Center, bars throughout Oregon, as well as at grocery stores in four packs.

Now to have my Oregon beer hook-up (Mom) send me some. Maybe drinking them will be good luck.

(Oh, and more Widmer news will be coming soon)