As threatened at the start of the month, I will be reviewing ALL 13 of the special Sierra Nevada Beer Camp collaborations in August.  I had my non-drinking wife randomly select the order and we start here with 3 Floyds and the Chico King. 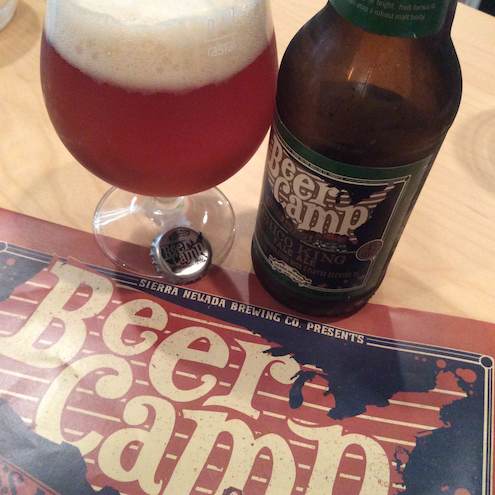 “Chico King is a mash-up of our mutual passion for hoppy pale ales and combines a uniquely robust malt body with intense citrusy and fruity new school hop varietals.”

The King pours a dark but still luminous orange color with quite a bit of foam and lacing to it.  The aroma is split between a toasty malt note and grapefruit pith with the toast coming out more and more as you smell it.

The taste is bright and carbonated.  Lot of bubbles rising in the glass as you watch it.  Bitterness sticks everywhere and, for me, primarily on the front of the tongue.  I keep coming back to toast but this is almost like having good bread with a tart marmalade on it.  The peel note isn’t there but this has that type of flavor mix going on.  The beer tastes heavier than the 6.5% noted on the label.

I have not had a pale quite like this though I would guess you could call this an IPA without anyone batting an eye.  Good start to my randomized journey through Sierra Nevada’s Beer Camp. 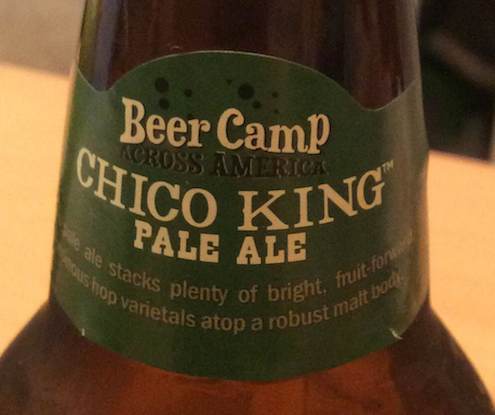 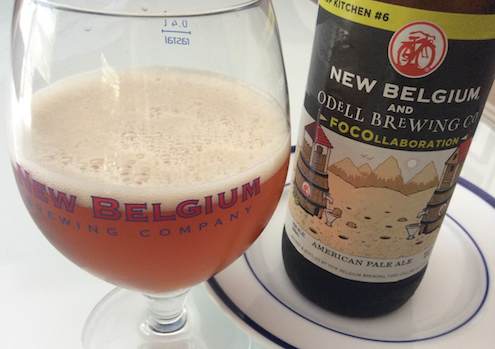 The Prairie Dog labeled beer pours a darker shade of orange. And is pretty hoppy for a purportedly pale ale. The aroma is a strong medicinal with some woody notes to it. The taste is also strong but not in the muddled way that the Stone collaboration was.

There is quite a bit if bitterness here. Citra seems more background to this Centennial bomb which I would prefer a more even mix of for maximum efficiency. But the lighter hand and pale ale category does allow the hops to shine more.

And it may be one of the only ways to get even a partial Odell’s fix in Los Angeles. 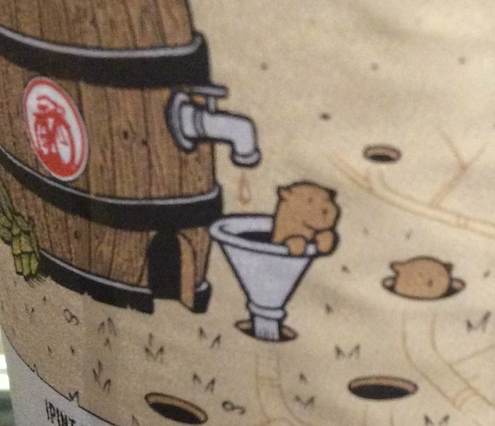 My local Trader Joe’s (and by local, I mean across the street) has upped it’s beer game in the past 5-6 months.  More options and newer options as well. But that hasn’t meant a stop to their “house” brands.  So my beer radar was up when I saw Ol’ Burro Brewing of Los Angeles on their shelves.

Now their house brands are pretty solid. Unibroue and Gordon Biersch with Firestone Walker doing some as well and now it appears Golden Road as well. No mention of it on the box.  Other than a mysterious “brewed in Los Angeles”. 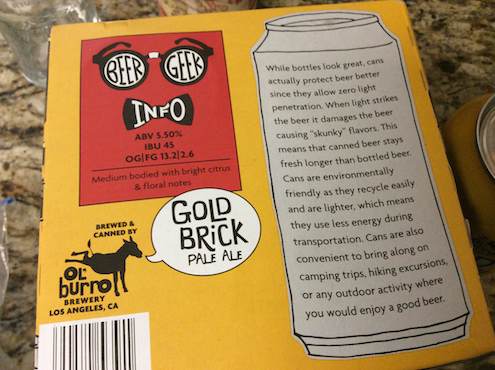 Since there are not many breweries in Los Angeles and not many at all that can. It is not much of a leap to Golden Road.  A cursory Googling found only an address.  An address on West San Fernando Road.  Which if you have been to Golden Road, is their street location.  After my Sherlocking, I asked the clerk where it was brewed and you can guess the answer I got.

Now I don’t know why the subterfuge.  The beer geeks will find out and all they are fooling are people who may not understand the contract beer thing.  And that may turn people off if and when they find out.  I would put proudly brewed for Trader Joe’s by Golden Road on the label and if people liked this lower priced offering, they might reach for the higher priced Heal the Bay Or Wolf Among Weeds the next time they beer shopped.

That is a topic oft covered on this blog so lets get to the beer…..

It pours a dark amber brownish/orange color.  For a pale ale, there is not much hop nose at all.  45 IBUs doesn’t scream hoppy though it is more in line with a traditional pale ale.  The first sips mirror the aroma.  Primarily maltiness.  Super easy to drink.  Leaves a pretty lacing on the glass too.  Very quenching but more an ESB than a pale.  And if the box and can replaced pale with ESB, I would have been pleasantly surprised.  As a pale ale, it is no great shakes and could use a serious bitter boost. 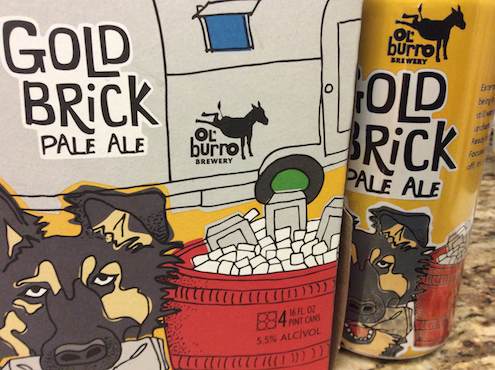 Obviously at a lower price point, you can’t expect Citra, Nelson or Rakau in your pale but you would expect more hoppiness to be there.  They also have four packs of a blonde ale as well.  Usually those don’t stray too far style wise.  That makes the choice easier.  If you want light, go for the blonde it will only set you back $4.99.  If you are in a malty mood then pony up an extra buck for the Gold Brick (ESB).

Thanks to the folks in Eugene, I got hooked up with the spring pale seasonal ale and now is the time to review some Ninkasi beer. 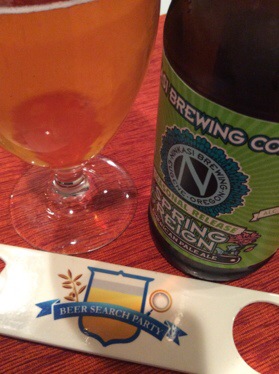 Spring Reign pours a very clear light tangerine color. With little to no head at all. There is a slight citrus aroma to it that fools the drinker into expecting a traditional pale ale but then that first sip and subsequent ones are very British ESB’ish. Loads of minerality to it. That saltiness combined with the grain taste make an interesting combo. As it warms, you get a slight touch of orange at the back.

And us in L.A. are also lucky enough to find their Czech pils, Pravda and their IRA. I would suggest getting all three for an Oregon taste test. 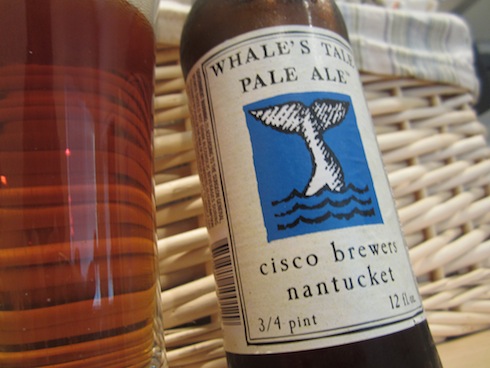 Los Angeles has been the recipient of some East Coast beers of late including this British style pale ale from Cisco Brewers. I love the simple label, especially the 3/4 pint notation. Pours a very clear and dark orange color. Aroma is more British pale for sure so kudos to brewing to style. Taste is primarily cereal malt with a small dose of hops. Does taste a bit watery which is odd for a 5.6% beer. Upon re-checking the aroma, you can almost smell the lack of oomph behind the beer. I am not arguing for a more hop approach but this does taste a little on the weak side to me. Then again my palate has had to work through Green Bullett and Carrack from San Diego brewers so maybe this is just an adjustment. 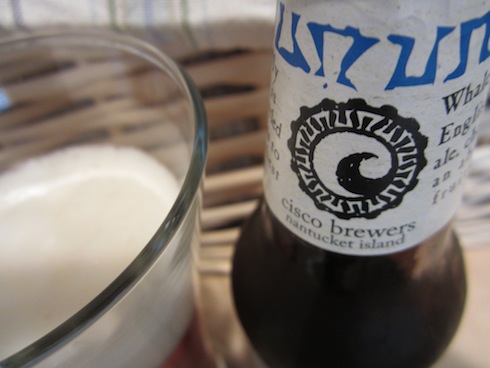 The “10 Great California brewed” series continues tomorrow over on Food GPS, with pale ales the topic of conversation.

Today’s tease though is that I want to run a different list by you good readers.  5 Underappreciated Craft Beers from California.

I would start with Scrimshaw Pilsner from North Coast – You see it everywhere but it gets no beer geek love.  Then follow it with Craftsman Poppyfields a British style pale that is chewy and malty but geeks either talk (and deservedly so) about 1903 or Triple White Sage.  Third up would be Anchor Liberty Ale.  A really pleasant beer that never fails to make a good impression.  Next would be Bear Republic Racer 5.  Everyone seems to try all the different variants but not the original.  Lastly, Kellerweis from Sierra Nevada is a great Hefeweizen and should get more cred.

What beers do you think people should be talking about more? 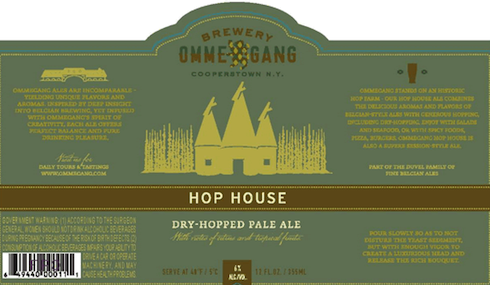 I am starting to really enjoy the Belgian IPA style.  And yes, I know, this new Ommegang offering is a pale but I like the interplay of the Belgian funk and the bitterness of the hops.  It eases the throttle on both flavors.

I am torn about the new label design though.  It does look fresher and more of a brand than before but the graphics are muted to me.  Maybe it is the colors that are not to my liking.

Recently, I went over to Beer Guy LA headquarters.  Jeff had received the two flavors of OnTap Beer “Enhancers” and he had a ‘fridge full of the surprisingly high 5.9% abv Natural Ice (Coors Light, Bud Light, PBR and King Cobra Malt Liquor also joined the fray later) to use as a flavorless beer to “enhance”. 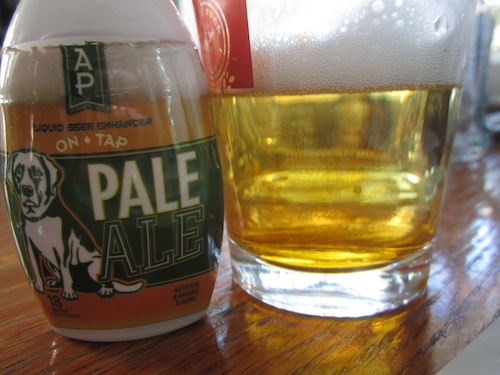 The dispensing of the liquid “enhancer” was not easy.  You either got too little or way too much.  It probably didn’t matter since either option tasted as foul as it smelled.  The American Ale (I’m guessing amber-ish in style) smelled like soy sauce at first and then mostly Nestle Quik.  It certainly did change the color to amber but that may have been due to my excessive second squirt of the malodorous stuff.  But the foam was left with a weird brown color on it.  I certainly could not barista a pretty design like leaves with this stuff.  The pale ale was less “stain” looking but, to me, somehow smelled worse.  Like a cross of skittles and sour patch kids. And the dispersion of the bright orange stuff through a clear beer was like watching an IV drip at work. 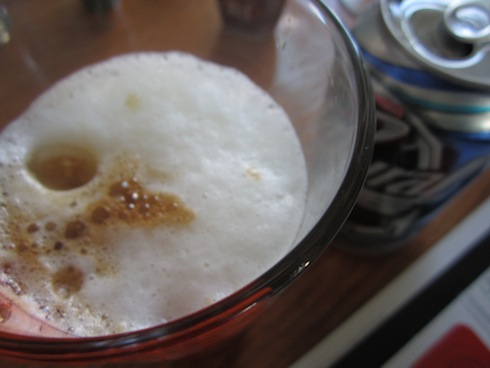 The American tasted better because it was like adding chocolate to a beer which is something that my brain could reconcile.  And since the Natty Ice was a decent base in comparison to the corn accented and practically water colored Coors and Bud Light, it was something you could grimace your way through.  The Pale (with a dog on the label that suspiciously looked like the Lagunitas Dogtown Pale ale version) though was just bad from start to finish.  If it was supposed to convey hops, it failed and failed badly.  It was candy flavored and the sugar was overpowering.  I tried a couple of different beers with it and none could cut through that high fructose corn syrup.

Braver souls than I attempted to drink a combination of both of the “enhancers”.  The painful grimaces on their faces and the subsequent drain pours told the story of that experiment.  Thank God that actual craft beer was also on hand, otherwise my tastebuds would have been very angry with me.

With Dave Willis and Craig Berry also on hand, the dismantling of this “enhancer” was too easy.  What we all kept coming back to was, how could this have escaped the lab as an actual sellable product?  How could the creators have possibly been satisfied with what they had? At best, enhancing a crappy product is not the way to go.  No one adds Hook’s Cheddar to a McDonald’s Big Mac. To strain the analogy, OnTap is not even government cheese.

This “product” floated around the internet back in June but I wanted to make sure my specific audience saw it and shunned it like the plague.

OnTap Beer proposes to add good beer “syrup” to a bad beer to make it better.

Now back in the day, Bert Grant from Grant’s Brewery (sadly, no longer with us) would carry hop drops for lack of a better term to bitter up his beers.  He would use an eye dropper, I guess, to improve the IBU quotient in his glass.

But he went on to brew beer. Groundbreaking beer.  Beer that I still remember fondly.  This “Beer Enhancer” probably won’t save you money when you factor in shipping and you still have to PURCHASE a bad beer to fix. 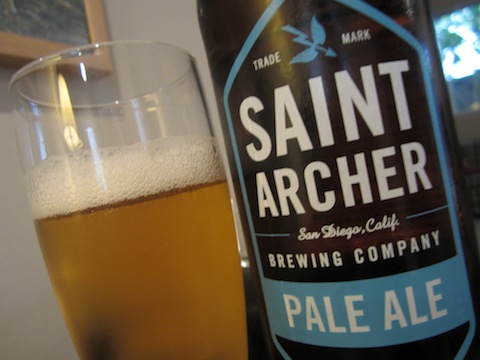 Here is my thumbnail review of my first ever beer from San Diego’s Saint Archer, their pale ale…..

“Pours a light orange. Has almost a Nelson Sauvin aroma and taste. Some herbal dankness as well. Almost a white wine set of notes. Bitterness is medium. A bit sharp. I am a bit conflicted on how to rate this.”

Here is the description from the brewery, “Balanced toward the hoppy end of the spectrum, this straight-foward, California-style pale is eminently sessionable. Crystal and Munich malts provide a backbone to showcase the bright, citrus, piney notes of Cascade, Chinook, and Simcoe hops.” 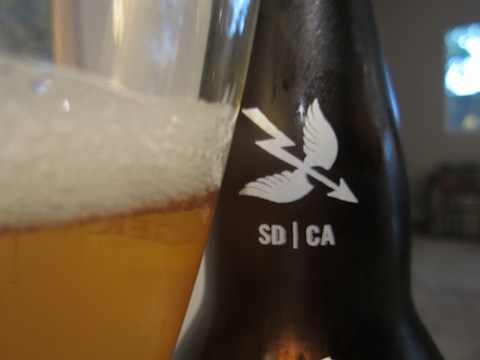