As a born and raised Portlander and a Gin fan, this new milestone release from Ecliptic Brewing is doubly up my alley.

This is Batch 5000 and it will be a golden BarleyWine ale aged in Old Tom Gin barrels and will reach 13% ABV. Maybe we will see this in L.A. 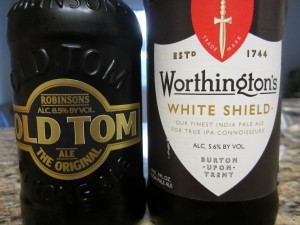 I was expecting a certain flavor profile from these two standards and award winning beers from England but I was surprised by how they did not conform to my pre-conceived standards. 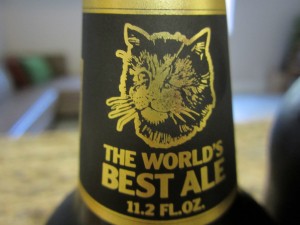 Worthington’s White Shield the older of the two. 1744 being it’s start date had a tinny apple aroma. It poured a pretty if standard orange color. Being a CAMRA award winner, according to the label, I expected something that I didn’t get. Maybe MolsonCoors has dumbed it down but it was light though it did have the musty British ale taste. It was also quite minerally as if the water was the star of the show and not the malt or yeast.

Old Tom was the tastier of the two. (My other beer taster enjoyed this as smoother and maltier). I agreed. It had an apple cider aroma and was smooth and a touch viscous. I got some anise notes in there as well. It was the more complex of the two with a touch of barrel agedness to it.

I would suggest grabbing the Old Tom’s first. It will challenge your opinion of British beer and make you yearn to taste it on cask i.e. real ale form.