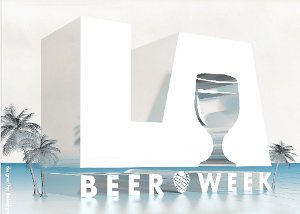 Entering the final weekend of LA Beer Week, I was excited to see how the closing festival turned out in it’s new location at Union Station. Very well indeed. Crap, I jumped the gun on my own post.

But first, I drove over to Eagle Rock Brewing on Saturday to try the LA Week beer. The aforementioned, Unity LA’s Team Beer. An imperialized California common. As well as the new lemongrass wit. They have been busy at ERB! (And I haven’t even talked about their coffee beer Stimulus)

Of the two, the Lemongrass was the winner. Distinct and vibrant notes of lemongrass that didn’t cloy on the palate. Why it doesn’t have a fancy name like the rest of the beers I don’t know. But it was delicious.

The Unity was solid and well made but not a style that I would normally go back to repeatedly. I think I just prefer the regular old fashioned common / steam beer. Amping up this style doesn’t add anything for me.

On to the FINALE!

I arrived early to volunteer and got to haul ice and do some general helpful things before getting my assignment for the four hour festival. I and Oregon Beer Festival veteran Richard would be manning the Wyder and Woodchuck cider booth.

Luckily that put us right in between Brian and Nibble Bit Tabby and Jeremy and Co. from Eagle Rock. And Craftsman was right across from us. Thankfully cider is easier to pour. Less finicky than beer. So we could watch the crowd ebb and flow and see everyone come to see Jeremy’s GABF medal.

It was a blast to be a part of something that put so many smiles onto people’s faces.

So now that the 2010 edition is in the books, I will be giving out two grades. One for the week+ of events and one for the Union Station festival.

I always found something to go to. And if I didn’t have something new or spectacular, I did get to re-visit some places that I hadn’t seen in a bit. That is such a plus.

Here are my recommendation for improving on this years edition.
1. The ability to tag and get updates on those events that most interest you. This would have helped me considerably. I mentally jotted down what I wanted to attend and then didn’t really look to closely after that. If there was an e-mail update that told me that the Oinkster event was about to put tickets on sale for an event that I didn’t know required tickets, I might have made that event. Same for the Hot Knives and Cheese at the Verdugo. Information was on the calendar very fast but it changed too and it is becoming daily work to keep on top of things.

2. Official “HOME of LA Beer Week” banners for establishments holding events during the week. Who knows how many people may have wandered into a bar or brewery if they could easily see such a sign. (More on signs later)

3. Keep pressing for more press. KPCC was at the Float Showdown. Los Angeles magazine did a blurb. More is needed and will come if the momentum is tended to.

FESTIVAL GRADE – B+
Why? – Good amount of breweries. Wide ranging beer selection. Was not cramped. Great location.
Why not higher? – Needed more signage and toilets. Needed to display the Unity beer more prominently.

First off, I want to congratulate all of the people who dedicated alot of personal time and energy to put this on. These events are hard to put on. Logistically and stylistically. Then factor in that this was the first attempt at this venue and you add more hurdles. Anybody who starts complaining or whining without spending time congratulating and high fiving people first, is an idiot.

Now down to brass tacks. AKA, my personal recommendations for improvement.

Pre-Event
1. I could not for the life of me find the list of breweries. Maybe it was there and I missed it. Either way, it was not easily accessible.

2. Push the mass transit. Link up to the rail and bus time tables.

3. Have the LA beer bloggers start banging the drums about what they are itching to drink.

During the event
1. We need the mayor or a sports personality to tap the first keg and it needs to be the official LA Beer for the week. And that beer needs to be front and center and visible to all walking in. Even if it is in limited supply.

2. Signs. In the Union Station space, a map truly isn’t required. I could walk around in 5 minutes with a festival going on. But signs would be nice. A sign for the Spero Foundation booth. A sign for the water. Where to go for the food trucks? If that is too costly or time consuming, posting 5 or 6 volunteers around the festival with “Ask Me” pins or shirts would work wonders.

3. I don’t know what the breakdown of new to craft beer vs. old hands has been for the festival but we need an education booth or breakout session. Where we can distribute information about all of the great places to go here in LA. I know a map is in the works but even a simple sheet just names, address, hours of operation and website might bring more people after the festival.

Post-Festival
1. Pre-assigned breakdown teams. Before the event, put people into specific groups for cleaning. One group starts by kindly getting our guests out of the area. Another group does empty bottles. Another group moves kegs. Another strikes tables. Each group should have a leader. There is a great group of volunteers willing to help that could use more forceful direction.

The Beer Babe has announced the topic of The Session #43 (Sept. 3) and “Welcoming The New Kids” challenges bloggers “to seek out a new brewery and think about ways in which they could be welcomed into the existing beer community.”

How does their beer compare to the craft beer scene in your area? Are they doing anything in a new/exciting way? What advice, as a beer consumer, would you give to these new breweries?

Take this opportunity to say hello to the new neighbors in your area. Maybe its a nanobrewery that came to a festival for the first time that you vowed to “check out” later. Maybe it’s a new local beer on a shelf on the corner store that you hadn’t seen before. Dig deeper and tell us a story about the “new kids on the block.” I look forward to welcoming them to the neighborhood!

All bloggers are welcome to participate. Just leave a link below The Beer Babe’s announcement.

Being a transplanted Stumptowner living in Tinseltown, I see new breweries opening in Portland with an envious eye and palate. Wishing that the same pace was being kept in the much larger market of Los Angeles.

Alas, I have to make do with two small but exciting breweries. Eagle Rock Brewing (which is 10 minutes away as the traffic flys) and Nibble Bit Tabby (which is downtown and in limited release). I have blogged about both too much as I search the past postings on my blog so I thought I would do a general three rules for the new brewer in the neighborhood.

1. Location aka “Where do I park?”
I have been to two community hearings and it seems that parking is the only thing that really pisses people off. You could sell beer anywhere if you have ample parking that doesn’t impinge on nearby homes and business. Why this is the most important thing to people is still a mystery but wow does lack of parking raise a ruckus.

2. Give me options aka “Please give me a growler”
People love to visit breweries so don’t be locked up all day. People love to buy the local beer at the local bar so be on draft near the brewery. And for homebodies who like to sit and watch TV on the DVR, the growler is a must if canning or bottling is too expensive. You get the point. Don’t restrict people from your beer. Most of the country ain’t gonna get to taste your beer so make sure that your immediate circle is fulfilled.

3. Charity is Cool aka “But don’t give it away”
You don’t have to give beer away to every Tom, Dick and beer blogger but make sure you supply ANY worthy cause in your vicinity. Especially now, no charity is going to turn away money because it is alcohol funded. And most love having adult only functions with a local vibe.

I am sure there are other golden rules not to be violated but from my experience, my three really need to be looked at.

On Saturday, May 15, from 5 PM – 2 AM, The Nibble Bit Tabby Release Party is at Blue Star, featuring food, kegs of Uncle Arnie’s Irish Red, DJ Will, fire breathers, stilt walkers and special guests.

Live bands include HDR, Ollin, Swords of Fatima, Suffering Luna and Black Babbath. The event’s open to the public.

Check out the FoodGPS post about brewer, Brian Lethcoe and his beer philosophy HERE.