Welcome to 2022!  I have a feeling that it will be a better year than the two previous.  Maybe that is optimism or just that I keep seeing new beers pop up and it makes me hopeful.  Have a blessed new year!

~ e-visits to (3) breweries that I would like to visit in 2022
~ special featured reviews of beer brewed in LA
~Heads-Up on Los Angeles Beer Events
~ Three suggested beers to buy this month. One light, one medium and one dark
~ A Book & A Beer reads Beautiful World, Where Are You by Sally Rooney
~ A Podcast & A Beer listens to Close to Death
~ Great Beer names and Best Beers of the Month
~ I will tap the Firkin and give my no holds barred opinion on the craft beer world.

I think that I would need a DDH Hazy if I ever came face to teeth with the scary creature on the latest hoppy release from King Harbor Brewing. Now that I look at those teeth more, maybe this should be a TDH.

Crowns & Hops has been busy with four! new beer selection out this month and Hermosa Beach Brewing has a three year anniversary beer for beer fans…

Angel City has released one new beer Mid March and also has another coming mid April….
MARCH – Barreljuice, Barreljuice, Barreljuice – “A beer-exorcist from the Netherworld; a simple saison transformed into a tart, golden, paranormal beer. Brettanomyces fermentation followed by six months confined to Chardonnay wine barrels, conjures an earthy barnyard aroma with hints of stone fruit and grape. This beer is dry yet sour, with subtle flavors of peach and persimmon.” 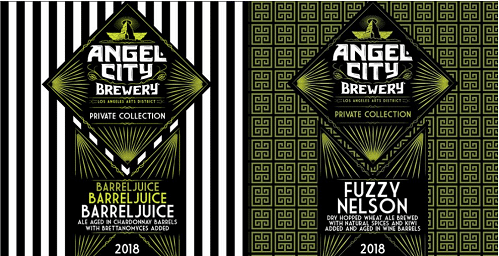 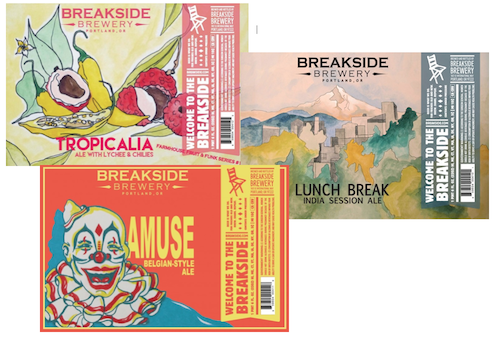 My down the street from childhood home brewery, Breakside is on a tear releasing a bunch of new beers to the world and though I don’t like the clown, not a fan of chiles, tired of the SIPA phenomenon and would like a plain old Gose, these four beers sound really tasty.

“To kick off 2015, we have a draft-only collaboration brewed with our good friends at Fat Heads Brewery. The beer, a Gose, is a slightly sour wheat beer made with salt and coriander. In a non-traditional twist, we derived all of the salt in this beer from an unlikely source; the Japanese Salt Plum or Umeboshi. Salt plums are small Japanese plums that have been cured with red Shiso and salt and spend a year “fermenting” in wooden barrels. The fruit is intensely briny, with a light sweetness and herbaceousness. Seriously though, these things pack a punch: we need fewer than 5 lbs of salt plums to impart a recognizable (yet balanced!) flavor to 1,000 gallons of beer!

In the spirit of collaboration, we brewed components of this beer at each of our breweries; Fat Head’s grew up the sour wort we used to give the beer it’s tartness, while Breakside supplied the base wort and salt plums. We think that you’ll find the finished beer to be incredibly refreshing and complex. It’s a “gateway sour” with a moderate body and slightly spicy finish. Cheers!”

“Our brewers draw inspiration for beers from all corners of the world of food and drink, and this beer is a perfect example. Influenced by a dish at Johanna Ware’s restaurant Smallwares in Portland, OR, two of our brewers designed a beer using lychee and Peruvian Yellow Chilies. The playful intermingling of moderate spice and unctuous, tropical fruit keeps this beer in balance. Early aromas of pepper give way to a rich and fruity mid palate that is followed by a pleasant, lingering heat. The use of several “Hot” hops with distinctive tropical aromas add additional depth of flavor to this unique beer.

This is the first release in our new Farmhouse, Fruit and Funk series. This set of six beers–each available for two months of the year–showcases the deft and playful ways in which our brewers use non-traditional ingredients to make complex, flavorful beers. From Lychees and Yellow Chilies to Oregon-grown Peaches and California Kumquats, this line of beers stakes a claim for the “culinary beer” as an emergent, delicious and elegant new beer style.”

“This characterful session Saison is a true delight for the palate! Notes of white pepper, coriander, orange, freshly cut flowers, and ginger come together beautifully in this easy-drinking Belgian-style Farmhouse beer. The delicate balance of herbal hop aromatics and spicy yeast flavors make this beer light, spritzy and refreshing.

“Amuse” is a Chameleon-like word with many meanings, and here, it means to have fun, to enjoy oneself. Amuse is a beer to enjoy with friends: to kick off a meal, to enjoy on a sunny afternoon outdoors, to share as a gift. We hope you’ll find drinking this beer as fun and amusing as it is for us to make. Cheers!”

“Lunch Break is our hop forward session beer, built for enjoying any time of day. Whether you call this beer a Session IPA, American Pale Ale, India Session Ale, Mini IPA, or something totally different, we know that you’ll find this beer to be full of juicy, classic hop flavor with just enough malt backbone to keep things in balance. We reserve some of our favorite hops–Simcoe, Amarillo, Cascade and Centennial–to use in this beer, which gives the aroma a heady mix of lemongrass, orange marmalade, grapefruit, pine and resin. Hop heads who seek a big punch of hops in the nose need look no further!”