Thanks to the lovely and talented Kristine Oller, I got not one but TWO beers from New Mexico. Here is the one from Sierra Blanca Brewing that I chose. 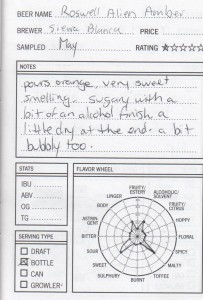 My 50 Beers from 50 States challenge has slowed considerably. But that was to be expected. I blitzed through 25 states and now I have to do some detective work to ferret out craft beer from states with less options and even less distribution.

I was surprised by an offer of Rhode Island beer which I will talk about later and then I got these two beers from New Mexico. I feel the momentum building back up. 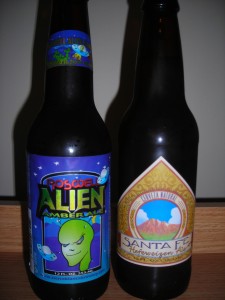 Throughout the month of May, I will be spotlighting various breweries in the southwest-ish portion of the United States. It is an area that most people don’t too much about and it is one of the weak spots on my 50 States challenge.

Here are a couple of beers from Turtle Mountain in New Mexico that I found intriguing…
STEAM ALE OG 1.052
This American Pale Ale features Northern Brewer and Cascade hops. Also known as Locomotive Breath, this brew has been a TMBC staple for the last ten years.

UNGLUED ALE OG 1.048
Are you gluten intolerant? Well now, there’s no need to go through life without good beer. Made with white sorghum as opposed to malted barley, Turtle Mountain’s Unglued Ale is a gluten-free beer. With more than a pound of Centennial hops per barrel, added in both the boil and the dry-hop, this brew is a pale ale. While all the ingredients are classified as gluten-free, this beer was created in our brewery which does house a multitude of various grains.

What with all the DIPA’s and RIS’ out there, it is easy to forget the humble barleywine. So here is one you should check out when you are in the southwest.

Here is the 411… “CHICKEN KILLER BARLEY WINE
Chicken Killer Barley Wine is the revolutionary beer that will someday define America’s unique Barley Wine style. It is brewed with twice the ingredients of the Santa Fe Brewing Company’s other beers, and only half the usual amount of liquid is extracted from these ingredients. This makes one substantial beer. At over ten percent alcohol, Chicken Killer is actually as substantial as wine, but this is not to say that it is difficult to drink. On the contrary; be careful with this one. The flavors of the beer are at first as overwhelming as the intense Santa Fe sun. But in the same way our sun gives us the unrivaled brilliant colors of Santa Fe, the potency of Chicken Killer gives us the remarkable spectrum of flavors that can be found in no other beer, in no other city. If you did not have the opportunity to try last year’s vintage, come try this year’s!”