The Portland Trailblazers had the 16th and 46th picks in this year’s NBA Draft. A draft considered thin at the top but with potential gems of prospects. Then Robert Covington happened and suddenly we Blazer fans got some depth and defense that we could really use.

That means I get to highlight a couple Palouse breweries that you could visit if you happen to be in Pullman.

Now it is time to dream of NBA success in the shortened 20/21 season.

Late Thursday night, while I was enjoying pizza and Beachwood beers at We’re Pouring, my beloved (and often shouted at) Portland Trailblazers made their pick in the 2019 NBA Draft. I know that free agents and who can be afforded is of more importance but let’s get to know….

Maybe Little Beast could create a North Carolina Paw Paw sour called Nassir. I don’t know how he will impact the team, especially with last year’s pick Gary Trent Jr. in front of him.

Yesterday, the salary capped-out Blazers had three late 1st round picks to use in the 2017 NBA draft.

If I was the GM, I would have dangled the 15 pick along with Allen Crabbe or Evan Turner’s bloated contract to anyone who would bite. Then I would take Jordan Bell from the UO for defense and hustle and Isiah Hartenstein to stash overseas and groom to be a Nurkic apprentice.

After the smoke had cleared, let’s call them “my” team traded their 15 and 20 picks for the #10 from Sacramento to select Zach Collins from Gonzaga and used the remaining pick on Caleb Swanigan from Purdue. 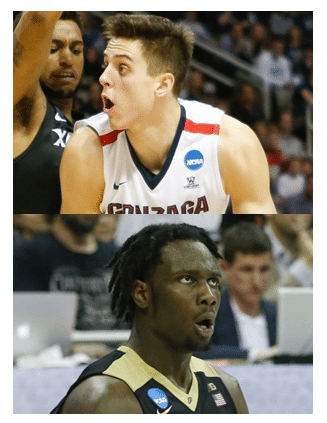 Based on their college team, here are some beers to toast the new arrivals to Rip City.

For Collins, it is easy. No-Li Brewhouse makes a cream ale by the name of Gonzaga or maybe Stellar Stout in the hopes that he will blossom into our starting power forward.

I couldn’t find a brewery in West Layfayette in a quick google search, but Indiana has a great number and I found an appropriate beer for Swanigan at Sun King Brewing. Big Iron English Barleywine or Bring the Hops, because Portland needs some rebounding.