So, my mom’s name is Ruby so I have always liked this beer. And it’s really good. Raspberry to the Max. Now they have imperialized it! “Our classic Ruby takes on a Rubenesque figure when we double the raspberries and malt in every batch. With an ABV over 7%, this special brew takes the tart effervescence that Ruby drinkers love and layers in a deeper raspberry flavor, earning this Imperial Raspberry Goddess the name Ruby Royale.”

Back to Oregon for a little jingle from Kris Kringle that McMenamin’s describes as a ” hearty and robust ale with a big and bold malt complexity. Toasty, caramel and fig flavors make up its sturdy foundation while two hop varieties added in five different additions deliver magnificent and intense hop flavor and aroma.”

I had been to Bend way back in college days. Back when Deschutes was probably the only game in town.

Now it is a major beer city. Warranting it’s own line in the Beer Advocate places in Oregon.

My goal was to check out Crux Fermentation and Ale Apothecary. And from there, everything else would be gravy. I got one out of two and the gravy.

Before I got to Bend, I so had to stretch my legs from the long drive from Portland, so I stopped in at the Sister’s Saloon and enjoyed a Boneyard staple, RPM IPA. It was a great start to the Bend beer overview.

First stop was Crux where I ordered up two fresh hop beers. One a pale and the other a lager. Neither struck me well though the bumping crowd with barely a seat to spare seemed to be enjoying the nice selection of beers on offer. I had better luck with their Sonoma charity IPA which had a really layered bitter flavor. The location is typical for a brewpub. Industrial area with food trucks nearby that is slowly gentrifying around it.

I sampled two beers from the Old St. Francis where I was staying. The Backyard Special Bitter and Let’s IPA. The former was the clear winner though it would probably have been better to order something on the porter/stout or rauchbier tip to pair with the fire pits in the courtyard.

I missed out on Ale Apothecary. Limited hours and nothing on Sunday meant that I was not yet in town when it was open. But happily, GoodLife is right next door and I found a pair of fun beers in my sampler tray. Tossed a British IPA was nice and balanced. I also liked the Sour IPA – Secret Stash 004. And, of course, Sweet As was just that.

Two other notable stops to relate. Sunriver Brewing has a lovely spot on Galveston near Growler Phil’s (get it?) where I had my favorite of the trip a hazy DIPA, Parkes & Wreck. The best place to drink a beer was Bend Brewing which has basically a little park overlooking Mirror Pond. An extremely peaceful spot to enjoy a beer.

As is my usual, I missed more than I tried. I didn’t visit a bottle shop or the newer breweries. But it just means that I will have to go back.

With the addition of their bottle shop on 23rd in NW Portland, came crowlers for McMenamin’s beers which was a big jump for a chain where most people filled the beer into mason jars. (including me on a couple of occasions). Now the crowlers have begat Ruby Ale and Hammerhead into 160z cans. 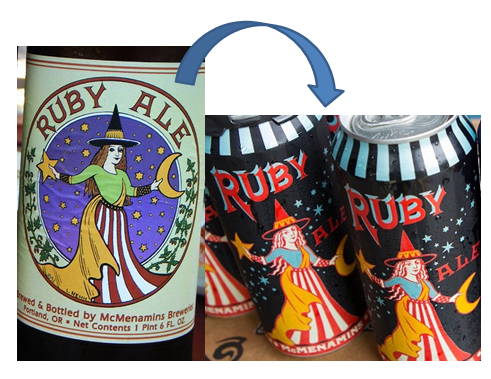 I doubt that the line-up of cans will grow exponentially past 2 or 4 at tops but now you have a few more options if you have a family member in California who is addicted to Ruby Ale and just can’t believe it isn’t available everywhere.

Both will be available to go at all of McMenamins’ 54 locations across Oregon and Washington as singles ($2.75 each) or in 4-packs ($10).

No, McMenamin’s is not opening a branch in Hawaii.  They are bringing a bit of Maui (the Pioneer Inn specifically) to Kalama.

Now Kalama is a drive-by to me.  My family lived in Portland the the grandparents were in Longview.  Kalama meant we were close to being let out of the car to have some ice milk with Grandpa and Grandma.

What is different is that this won’t be a remodel model that the McMenamin’s usually do.  This is from the ground up a 40-room hotel with a Hawaiian theme.  A rooftop bar with a view of the Columbia River plus brewing operations, pub, restaurant and bottle shop too. 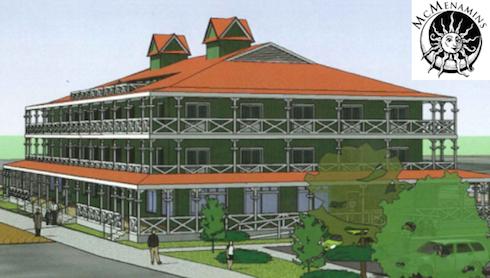 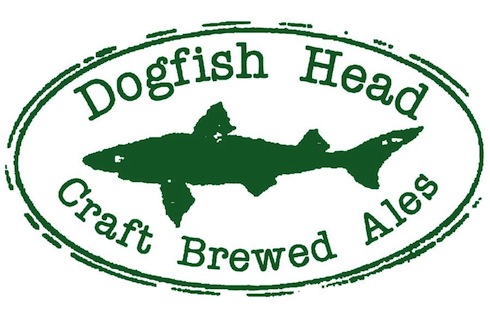 Dogfish Head brewery has announced plans to open a hotel, the Dogfish Inn, sometime in or around spring 2014.

Each room will have a mini-fridge that you can fill along with beer glasses and a bottle opener on the wall.  This is a trend that I think will accelerate in the coming years.  Craft Beer tourism is big.  McMenamin’s runs a few boutique hotels and resorts.  (I even had my wedding reception at one!)  Rogue has their own Beer and Breakfast.  And Stone has been toying with the idea as well.  Much like a casino wanting it’s whales on the premises, a brewery wants its fans close by too.

Maybe you can stay the night and try their Moondust beer.

This McMenamin classic raspberry brew turns 25 this year and I thought I would offer up some thoughts about it. 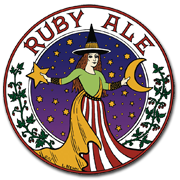 But first, this is what McMenamin’s has to say about it: “One of our most popular standards, we still make Ruby with the same aims we had when brewing the first batch back in March 1986: To create an ale light, crisp and refreshingly fruity. Great Western Premium 2-row and 42 pounds of Oregon-grown and processed raspberry puree is used to craft every colorful every batch. Simple but delicious.”

Ruby Ale along with Weizenberry from Thomas Kemper were my gateway to beer geekery. Some may scoff at fruit beers unless they are aged or sour nowadays but whenever I am in Portland I usually have some Ruby. It’s a beautiful pink color and the taste is crisp and sweet at the same time. It is also my sis-in-law’s favorite so it is a special beer to me. 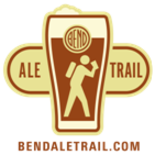 Trail Map and Passport Program: The Bend Discovery Map will serve as the starting point of the Bend Ale Trail. Part navigational tool to each of the breweries, and part “Bend Ale Trail Passport” that visitors can have stamped at each of the breweries verifying their visit. Completed passports can be redeemed at the Visit Bend Welcome Center for a commemorative Silipint® a folding silicone pint glass for beer drinkers on the go. Beer geeks who also visit Three Creeks Brewery in Sisters, will receive an additional prize.

An app for that: In collaboration with Sidestreet Maps, Visit Bend is creating an iPhone and Android Phone compatible interpretive guide that provides an insider’s look at Bend’s beer culture. The Bend Ale Trail iBend Tour download will be available at no cost.

Guided Tours: For visitors who are looking for a guided tour of the Bend Ale Trail, The GETIT Shuttle will be offering guided tours using bicycle pedicabs, or for larger groups the GETIT Shuttle bus. For reservations with GETIT by Green Energy Transport, call (541) 610-6103.

Special Offers: Many of the Central Oregon breweries are offering a variety of special deals and discounts for those who mention The Bend Ale Trail when ordering. 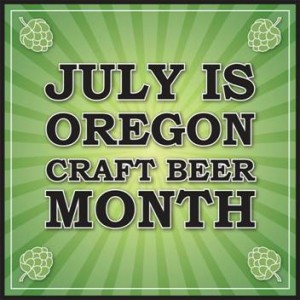 The Produce Row Cafe has a long history on Portland’s eastside. Now another chapter has been started with new owners and a remodel for the interior and the beer list.

It is one of the beer bars that is beer bar historical along with the undisputed leader, The Horse Brass.