Even the latest LD from Firestone Walker got a bit of a label re-fresh along with the hop list for this all New Zealand iteration….

The hop news for this IPA is the use of the Nectaron hop and this is the backstory from the press release, “The latest Luponic Distortion stems from Brynildson’s travels around the Nelson region of New Zealand. There, he befriended multigenerational hop farmer Brent McGlashen, proprietor of MAC Farms, as well as Dr. Ron Beatson, a hop geneticist with New Zealand’s Plant & Food Research public breeding program.

After his initial trip four years ago, Brynildson returned two years later and followed up on emerging hops like Hort 4337, which McGlashen was growing on an experimental basis at the time. Hort 4337 would later be named Nectaron in honor of Dr. Beatson. The name Nectaron is a marriage of “Nectar of the Gods” and Dr. Beatson’s first name, Ron.”

Here is the hop roster for the 18th Luponic Distortion…. Nelson, Nectaron Riwaka and Motueka hops. Firestone is running the gamut of hop combinations.

The latest Luponic Distortion from Firestone Walker is a Pacific Northwest three hop, one New Zealand and two German endeavor the trio includes “two with a softer, juicier character, and one with a more edgy citrus quality.” The German side features hops “that are among (Brewmaster) Brynildson’s favorite discoveries from his forays to a variety of family hop farms in Hallertau”. The final hop is, ironically, a mixture of American and German heritage.

Firestone Walker is headed into serious breakfast fruits for the upcoming Luponic Distortion. Blueberry meet Pomelo grapefruit for the next 2020 IPA in the series. I am hoping that at one point they will variety pack a few years worth of the series to make comparisons. But I am excited to taste this one.

News from Firestone Walker to pass on. A new Luponic Distortion is out with a Lychee tint to it and BarrelWorks has their first ever blueberry sour beer. The press release states that they are made with Bluecrop blueberries which I read as BlueCorp each time. As the photo shows, it is quite a pretty beer.

There is a new look to the 10th Luponic Distortion from Firestone Walker. 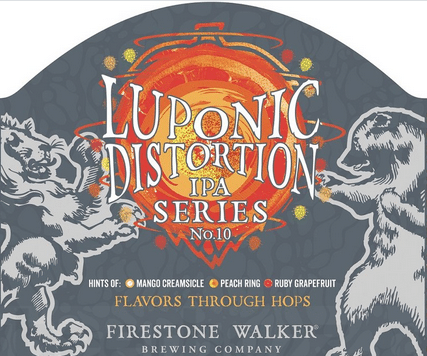 Now don’t go running to your beer shoppe. 010 is slated for the July to September window. Go try the Public Domain 009 and ready yourself for the next cycle. 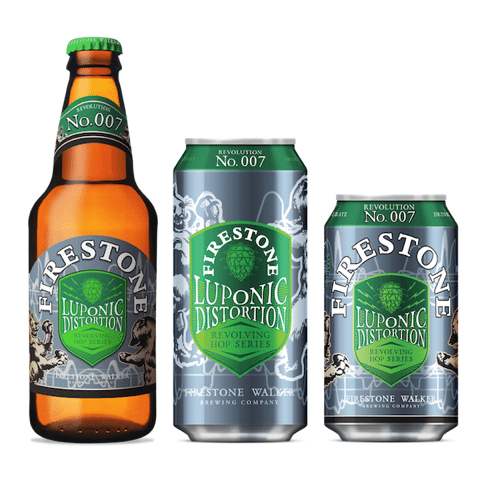 Luponic Distortion from Firestone Walker is back for their 7th revolution and 007 is headlined by three hop varieties from Australia.

Per brewmaster Matt Brynildson. “The primary Australian hop is loaded with this bright, citrusy Sauvignon Blanc character, and the other two hops round it out with classic Southern Hemisphere qualities.”

The other “new” is that the IPA will also come in 16oz cans.

Remember – it is up to the savvy customer to keep track of which number we are at, to get the freshest. 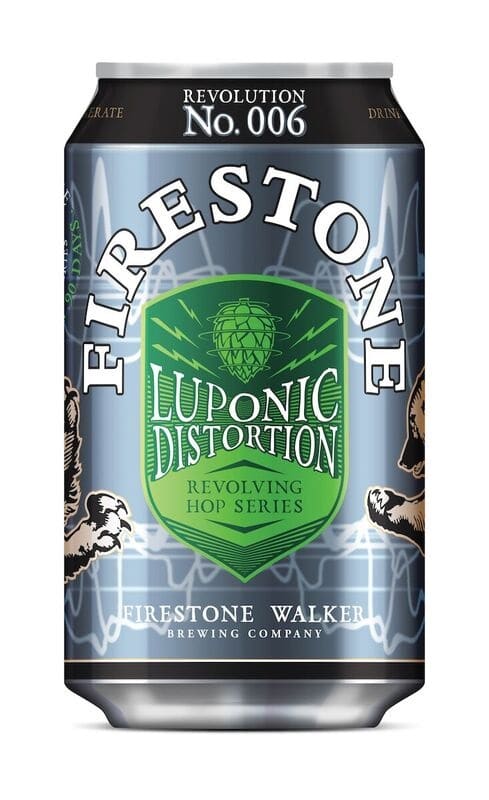 Hard to believe but we are heading into Revolution No. 006 of Luponic Distortion from Firestone Walker. And this time they are bringing a bit of Michigan to California.—a blend of seven hop varieties led by two hops grown in the up-and-coming region of Michigan.

006 is a blend of seven hop varieties including two hops grown in the Michigan “terroir” by Hop Head Farms. The Spartan State hops add “a bright, citrusy grapefruit territory.”

Good to see the series take a left turn. Gotta keep the hopheads on their toes.

And this will be coming to cans too… 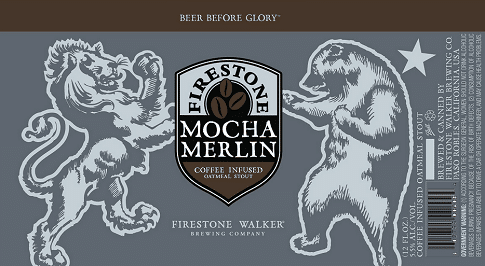 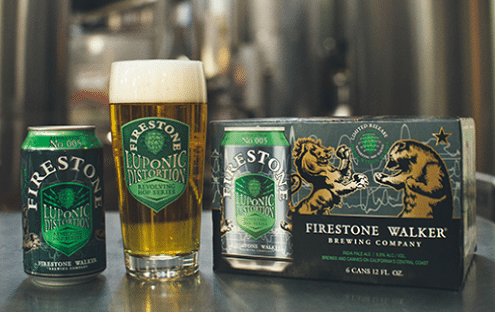 The wheel keeps spinning and by now the 5th revolution of the Luponic Distortion series from Firestone Walker should be everywhere and will be out until May of this year.

Here are the details on 005. The beer “features one of our favorite new hops from the Yakima Valley in Washington state, supported by a couple of other Pacific Northwest standouts to deliver a complex spectrum of ripe tropical, citrus, and berry fruit aromas. Lead by notes of Pineapple, orange, guava, and mango, meyer lemon, green tea and blackberries round things out. 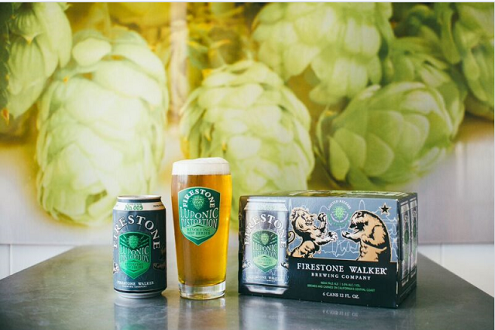 The third Revolution has arrived. Which means 1. Triple-check the neck of the can or bottle for 003. You don’t want to accidentally get 002 or 001, god forbid.

So what hops are featured in Firestone Walker’s Luponic Distortion – Revolution No. 003? It’s a blend of nine different hops with two German hops in the lead. Both currently nameless it seems. The first gives off a mandarin orange character while the second hasn’t even been presented on such a big scale and stage yet. The last hop to mention is Comet which lends a fresh fruit aroma.
I have thoroughly enjoyed the first two in the series and I look forward to the newbie too.