Lost Abbey is no stranger to spin-off lines.  Hop Concept is their IPA offshoot and now they are launching Tiny Bubbles in 2020 with 4-packs of slim 12oz cans starting with two flavors, brut and rosé.  I applaud that Tomme Arthur and crew have not bowed to the seltzer whims (which will come back to bite some, methinks) and have taken their core competency and put a spin on it.

Lost Abbey is known for sours and wild beers and big format bottles so it was with wonder that I saw six-packs on the shelves. One is Devotion, a blonde ale and the other is a Farmhouse lager. Now it’s time to match up these 12oz’rs and see which is better… 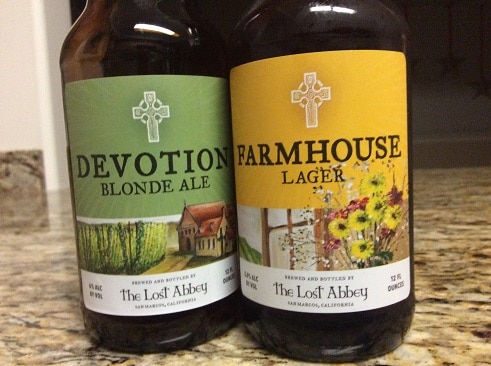 Great labels on both and though the Devotion is more of a sipper than the normal blonde ales on the market, I prefer it over the lager. I also hope that more Lost Abbey beers get the 12oz treatment.

Next up in the Christmas countdown comes from Lost Abbey, Gnoel de Abbey… 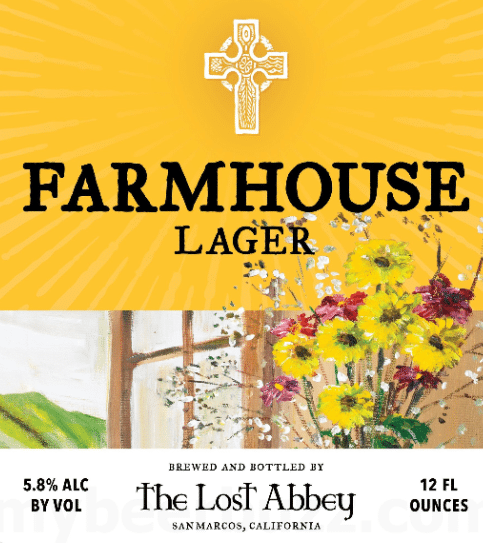 I haven’t had a Lost Abbey beer for some time now. No one good reason to account for that other than I felt a certain overmuch to some of the ideas. But when I saw the label for this simple, new Lager with a farmhouse adjective, something clicked, and it went onto the “look for it” list.

For all the trouble that rare beer sales cause, it makes you wonder why anyone in their right mind would attempt one. And after failing, trying it again.

I am not implying that perseverance is bad but if you did not “duck” well the first time or “duck” out of the way the second time, then you will be a stuffed “goose”.

Of course I speak of the recent Lost Abbey Duck, Duck fiasco. Their very limited gueuze that only makes the rare appearance in the craft beer world. Websites were crashed. Purchasing was clogged and there were enough angry commenters to fill a Trump rally and probably even scare the Drumpf himself.

I think I will stick with one French newspapers policy of not giving terrorists page space and not include the comments here. There is no fury like a whale hunter denied a bottle. You can find the good, bad and entitled ugly HERE. Suffice it to say, there is an undercurrent of beer fandom that does not feel catered to enough and no apology would be accepted.

Other than not releasing the beer there is no magic bullet for limited release sales. You are guaranteed that someone with access to the Internet will not get exactly the amount of bottles that they want and will vent their so-deserved expletives upon you. I will offer two steps to make life more tolerable though:

The first step is to eliminate the Internet sale. With that move, you get rid of the “refresh rage” of those who cannot get through the jammed Internet (when they should be at work). Make the customers come to you. You get two wins by doing this, one, it is easy to compose an anti-Lost Abbey screed from the anonymity of an avatar but harder to kick up a fuss in person, at the brewery. You also curtail the resale market buyers who cannot easily buy from the comfort of home.

Next, limit the purchase amount to two bottles maximum. Again to make the illegal resellers work harder but also to get more bottles into different ‘fridges. Personally, I would limit to one bottle but I understand that might not feasible for the good customers who you want to keep coming back. In that vein, once the rare bottles are depleted, I would offer a discount on other bottles that day with the discount going to charity. Give people a reason to stay (and feel good) if they end up without the nectar of God’ tears.

As an added show of fun, I would celebrate the person who just missed the bottle cut off with a hat, shirt and a free beer. The NFL spins great PR of the last person (Mr. Irevelant) picked in their draft and the brewery could do the same here to make lemonade out of a sour situation.

Or you can keep doing the same thing over and over. History shows that works well.

The video says it all….

Brasserie Dupont has played around with a dry-hopped version of their Saison but now they are kicking it up a notch and doing the full San Diego with Tomme Arthur.

Side note: The collaborative duo will be at The Phoenix on 3rd Street on the 23rd to pour the new beer. First visit to L.A. for Oliver from Dupont and it was fortuitously scheduled for our L.A. Beer Week.

It being hot and humid in July, here are some lighter beers for you to try ranging from Hawaii to California and then on to Belgium!

A dry hopped version of the world famous standard bearer for saisons. As the Vanberg & DeWulf website notes, “featuring the famous Triskel hop varietal from Alsace. Triskel is bred from the French Strissespalt and English Yeoman hops.”

I never like to see a batch of beer having to be tossed. But I do give kudos to Port / Lost Abbey for documenting what happened. I am always fascinated by what happens in the brewhouse in good times and bad.

It is collaborative and very Yeasty beer day here at the Beer Search Party. And if Brux isn’t enough Bretty goodness for you then how about this…. 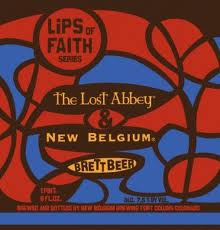 The simply named Brett Beer from New Belgium and Lost Abbey. Here is the brewery description: “brewed simply with pale malts accompanied by Target, Centennial and Sorachi hops for a hint of citrus. Focusing on their mutual respect for the ingredient, the spotlight shines on the brettanomyces, where a full brett fermentation offers bold pineapple overtones and funky, sour edge. The beer is a shining, golden shade and is warming and dry.”

Again, I am late to the game. Only took me 8 vodcasts to finally catch on with what Lost Abbey is up to. But now I know and hopefully you do to that if you head over to Vimeo you can find a plethora of craft beer videos like the one below…..