Better than whether the groundhog sees his/her shadow is the day at the Los Angeles Zoo when an animal selects the special ingredients for the Brew at the L.A. Zoo special beer.  This year Charlie, a Linné’s two-toed sloth picked pear and roses for the 2019 beer.

The Brewery at Simmzy’s brewmaster Brian Herbertson will add those two ingredients to the German Kolsch style, which will be named, Slothen Bräu,” According to Herbertson, “This light beer will have bright pear notes and some subtle cherry-like flavors and pair well with a range of pub foods that will be served that evening.” 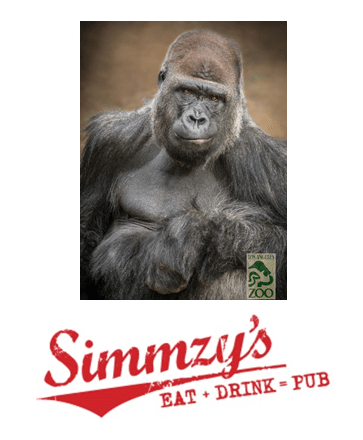 If you did not make it to the Brew at the Zoo this year, you can still check out the special beer made by the Brewery at Simmzy’s for that festival at Simmzy’s Zoo Brew Dinner which will feature Hasani’s Silverback Summer Ale.

To recap: “Head Brewer Brian Herbertson was invited by the Los Angeles Zoo to work with Hasani to create a beer based on ingredients sampled by the gorilla during a special tasting.”

The initial brewery list for this year’s Brew at the Zoo is out. This year the event is on August 4th and will hopefully be held under cool skies.

The location is awesome, the list has good in it but you have to know which to avoid to stay classy and #independent…. 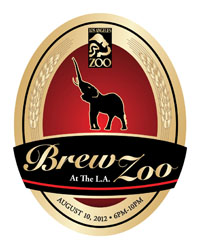 I had a great time at last year’s version. Most beer events don’t particularly care about the surroundings. But it is amazing how more relaxed and enjoyable an event can be when the backdrop is nature. And they had good beer too. And beer from places like I&I which is out in the Inland Empire and Noble Aleworks from Anaheim plus they had El Segundo and Strand and Eagle Rock too.

“California craft breweries offer samples during this unique 4-hour beer tasting experience. Upon arrival, “Brew at the Zoo” guests will receive a collectible sampler glass and the opportunity to enjoy many of the great things guests love about their daytime Zoo visits, but with an added twist of 21+ fun.

Aside from the array of craft brands at hand, tantalizing foods will be available to fill guests’ cravings. “Brew at the Zoo” also wouldn’t be complete without the sounds of toe-tapping live music to fill the air. Finally, complete the night with laughter provided by live comedians from the Laugh Factory.

While your taste buds are enjoying the hops-therapy and intimate setting, gaze your sights on animals including the Zoo’s newest exhibit – the LAIR (Living Amphibians, Invertebrates, and Reptiles).

Tickets are expected to sell out to this event and should be purchased ahead of time. Member Tickets are $30. General Public Presale Tickets are $40. Designated Driver Tickets are $20 (does not include a tasting glass or alcohol consumption). All guests must be 21 years of age or older to enter the event.

Stay tuned to find more information about participating breweries, bands and other details HERE. It’s going to be a wild time!”