Never got into the Scott Bakula show, even though I like the time travel. So let’s look past to the Leap Year part and to the hops in this Feb. 29th beer from Los Angeles Ale Works. This new West Coast Triple IPA has your Cashmere, your Azacca and Bru-1. It should put a little spring in your step if not leaps to your bounds.

One of the many great charity campaigns is the Ales for ALS. You will mainly see these beers on draft but some, like this from L.A. Ale Works…

…is canned. This year Yakima Chief has a new hop blend that features Mosaic, Simcoe, Sabro, Loral and HBC 630. Be on the look-out to support this cause.

The latest IPA craze is yeast based with Norway being the source. L.A. Ale Works is on v2 of their Aquanut that comes out today and this is what they say about it, “This yeast produces intense tropical and citrus fruit flavors, and mild acidity. We double dry-hopped this beer with Idaho 7 and rare Sabro hops. The beer pours bright and hazy and immediately throws off intense pineapple, coconut, grapefruit, and stone fruit aromatics. The body is full and there is a touch of citrus pith on the finish.”

You won’t miss the blue feather adorned can.

If you haven’t watched either Fyre Festival documentary or read about it then the following beer from L.A. Ale Works might not make much sense (except for the hops, of course)

I am sure that this beer will stand on its own but a little backstory never hurt. Orange Crushed Dreams will release on 2/9/19.

L.A. Ale Works has been upping their can design game and this new holiday / home brew competition winner shows that off in a simple but effective way. That’s not to mention that the beer inside is less noteworthy. It has been duly added to my beer shopping list.

There are plenty of podcasts that go on forever. The kind where you decide that you won’t start one because it is better to listen to the full hour and not in snippets. But when you find a podcast that is 10-15 minutes and is really cool, that is bliss.

Song Exploder in that short time frame has a musician, member of the band, producer talk about one song. They explain the genesis of it. You hear the separated tracks (stems) and you basically hear the entire song taken apart and then played at the end.

The host and creator is Hrishikesh Hirway and he is not front and center. I would call him more of an editor. You hear from the guests which have included Björk, U2, Metallica, Solange, Spoon, REM and even composers.

For the beer, go out east to Homage Brewing and pick up some crowlers of Sound Dust or Ride the Fader. Or you can scan your beer shoppe shelves for beers that have musical names to them. One other option is the recent L.A. Ale Works L.A. Phil Brut IPA.

For 2018, LA Beer Week has sibling IPA’s. Here is the official BSP reviews:

Juicy IPA
Pours a pretty and barely hazy orange. This one has Mandarina over the west coast Simcoe. Has a full, fuzzy mouthfeel to it. Aroma is piney and dank to me. Little tingle on the mouth. I did not store the can upside though so maybe that is the issue. Getting a bit of mango and pineapple but not in heavy doses. 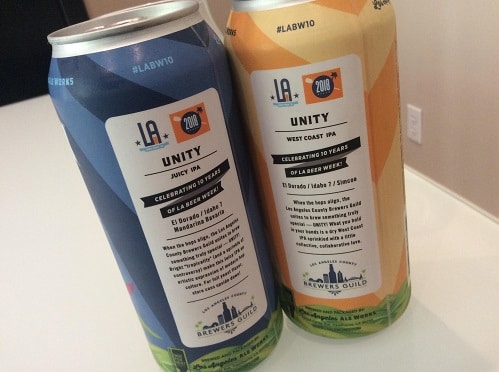 The Verdict – Go for the yellow orange can.

The second of two IPA releases from Los Angeles Ale Works has a kitten in a spacesuit. Not driving a Tesla though. 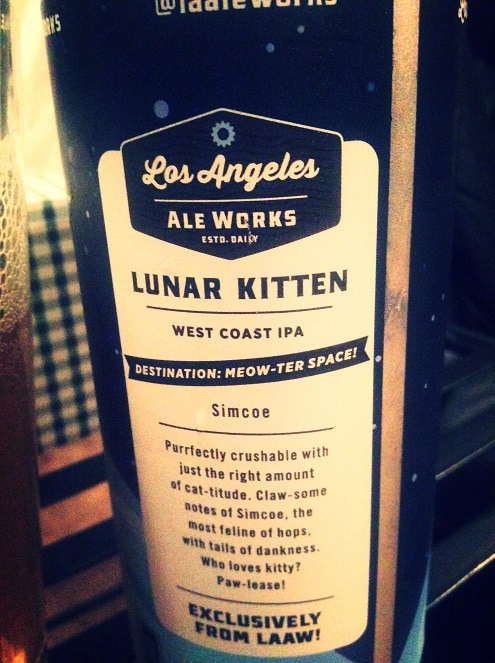 This IPA pours a yellowish orange color with a bright orange and melon aroma. Very soft and pleasant. Fruit forward but with a really good kick of hop bitterness that sticks around. Doesn’t taste like 7.5% at all.