Here we go again with the beer has got to be easier push, this time SquareKeg which scored a SharkTank deal for Tim Loucks, the company founder.

His product is the SquareOne mini-keg. With the following claim, “SquareOne has the ultimate cool factor by providing more volume in less space, but let’s you bring, not just beer, but your favorite drink on tap just about anywhere.”

SquareOne holds 128-ounces, holding two growlers of beer, or eight pints. All you do is provide the liquid, assemble the tap and then pressurize it.

The non-conformist keg sells for $299 which seems a lot since you are going to have to pay through the nose for CO2 nowadays. 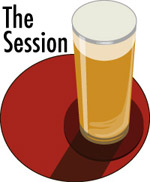 Here is the topic posed by the Reluctant Scooper:

The method of beer dispense often raises the hackles of even the most seasoned beer drinker. Some evangelize about living, breathing cask as being the one true way. Others heartily support the pressurized keg. The humble tinny has its fans. Lovers of bottled beer, either conditioned or pasteurized, can be equally vociferous.

Perhaps you think that one method magnifies a beer’s impact. Perhaps you won’t try a beer if it’s dispensed in a way you don’t agree with. Perhaps you’ve tried one beer that’s been dispensed every which way.

The question is simple but your answer may not be: Cask, Keg, Can, Bottle: Does dispense matter?

Yes, a cask may bring out all of the flavors of that English ESB or a nitro may add notes unseen to an Irish stout but I think those are isolated examples. The pale ale is not going to be appreciably (and I am talking the average beer geek not the ciccerone or brewer) different be it from the bottle or can or tap. If (and you knew this was coming) the same care was shown by the people in the supply chain from Brewer A to Beer Merchant Z.

Some taps may be fresher but you have to deal with clean lines. Bottles may sit too long in harsh light. Cans may be set out in the sun too long while being delivered.

A recent example reinforced my idea. I had a Sierra Nevada sampler tray at the wonderful Tony’s Darts Away in Burbank, California. On it was Hoptimum. It was too harsh for me on the tip of my tongue and too boozy at the back end. But I also had a bottle in my ‘fridge. The next day, tried again and got the same result.

If the beer is good and it arrived to my pint glass in peak condition, then I do not care. (But I am willing to have people buy me a beer to make their point!)