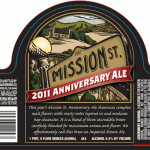 One of the great surprises of 2010 were Firestone Walker bombers made for Trader Joesunder the Mission Street Label. The Hefeweizen was solid and even better was the brown ale that had just the right balance of malt and thickness with a spice kick.

Now they have produced a new beer, Mission Street 2011 Anniversary Ale. The copy on the label explains: “This year’s Mission St. Anniversary Ale showcases complex malt flavors with roasty notes layered in and medium hop character. It is a blend of three incredible brews carefully blended for maxiumum aroma and flavor. We affectionately call this brew an Imperial Brown Ale. 8.5% ABV.”.