You ready to rep LA beer?

Then Hopped LA has you covered with the latest roll call brewery t-shirt. Find your favorite in what looks to me like a film credit from an action movie font.

Another great site for beer content in Los Angeles, Hopped LA, has re-started their Ranked series of podcasts starting with a show about the West Coast IPA. And while it is easy to quibble about which brewery landed where, I find it useful because it is not the normal, run-of-the-mill clickbait.

It is more a discussion and the inherent silliness of these rankings is acknowledged to get to the Why and Which beers are the rationale for who is at #4.

Another point that was brought up that I found a good tool, is to group breweries into tiers. I have seen it done effectively for sports and it is a good method to use when creating your own internal or loudly spoken opinion.

Give the show a listen. No spoilers here but the 1 and 2 are pretty unassailable.

Hopped LA is posting a cool series of podcasts where host Gary Magnone dials up brewers and talks about one specific beer from their range and then proceed to drink said beer for immediate tasting notes. Ten Mile has been on to speak about their Kentucky Common, Hidden Hollow and before that Common Space Brewing was the guest. Check it out and then the website also has a handy to-go page as well to give you ordering info.

In addition to buying beer in these times (safely of course), another way to help out is with merch. And I have two options for you!

Tank Farm is selling a range of “Support Your Local” shirts that you can see HERE. It includes some L.A. breweries and then stalwart beer site Hopped LA has a new shirt that will help out the industry and their workers as well that you can check out right HERE.

Thanks to the crew at Hopped LA, I got the opportunity to test out beers from new Torrance brewery, Buzzrock. (and be filmed for an “unCanned” segment too)

Gary Magnone received a whopping 12 crowlers. Basically covering all but a couple of the beers that Buzzrock makes at their Brews Hall at Del Amo location.

Considering the brewer lineage of Stone and Monkish, it was no great shock to find that the beers were all above average. There was some weirdness though, the pale ales were all dark orange in color while the IPA’s were uniformly golden yellow. The Witbier was made with peaches and boy was it dripping with the actual fruit taste, then there was the Sabro Hop Double IPA which was a straight up coconut bomb.

Of the group, my pick for what to try is the Hazy IPA because it too, was weird, but it grew on me. It had the right color and haze profile. The aroma was spot on but when you sipped, it was Cascade hopville. Picture a hazy with the fruit taste removed, replaced by pine. More classical was their Oatmeal Stout which ticked all the boxes for the style. Coming in third for me was the Oat Pale Ale which was bright with fruit and had a nice hop/malt balance.

Between the George Lopez and Colin Cowherd sub-brands, I would steer to the Cowherd. Both the Pils and IPA were down the middle whereas the Lopez beers seemed to be trying to hard and ended up not working well for me.

Promising start though for Buzzrock, enough to make a visit to their Torrance brewery a better bet.

Hopped LA is a great source for events coming up as well as their fancy brewery t-shirts (get one, they are great!) and now they are entering the podcast arena.

And they lined up a great one-two punch for their 1st episode:

Check it out and subscribe and then do the whole 5-Star thing that Apple demands.

You don’t want to not have the latest fashion and you do not want to not represent all of the L.A. area breweries as of 2019, am I right?

Then head over to the Hopped LA website and pick up this sweet t-shirt. Use it to remind you which breweries you need to visit or which are your favorites or whether you like more of the green names than white.

On the 21st, you can celebrate Hopped LA night at Beer Belly in Koreatown and raise a glass to be kept apprised of beer in Los Angeles.

If you have sweated out or spilled beer on your beer t-shirts, maybe it is time to throw out the old and online order the new.

Here are two shirts that I think are cool… 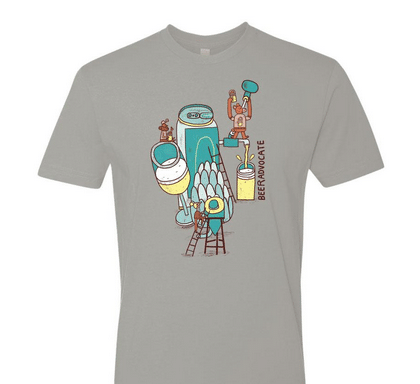 You can find it HERE 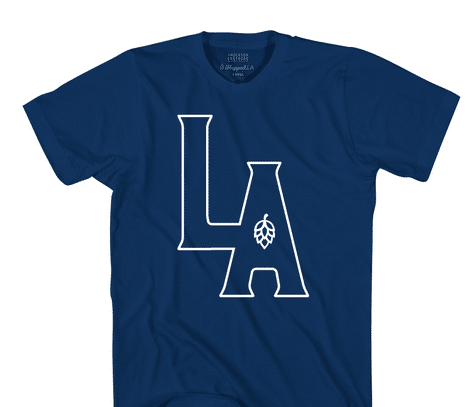 You can go Dodger Blue by hitting this LINK

Do you know how many breweries are in Los Angeles County? Did Mayor Garcetti’s backtracked World Series bet get you to thinking what L.A. beer you would send to another city?

There are two ways you can have a handy list on hand when your phone is low on batteries: 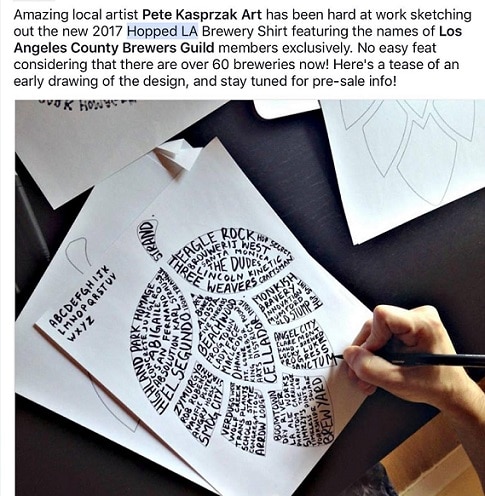 The second is the handy foldable L.A. County Brewers Guild map. For the kids, it is something your parents used before Waze led you down blind alleys and cul-de-sacs to avoid traffic. 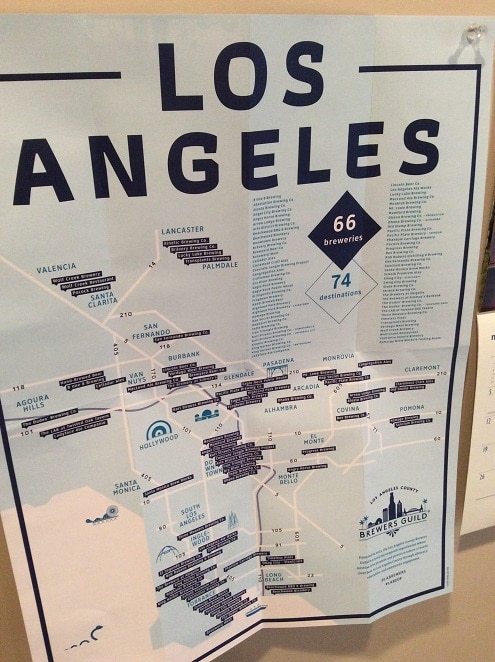