Fall has meant beer + food boxes in the mail. First was chocolate, then potato chips and now jerky! 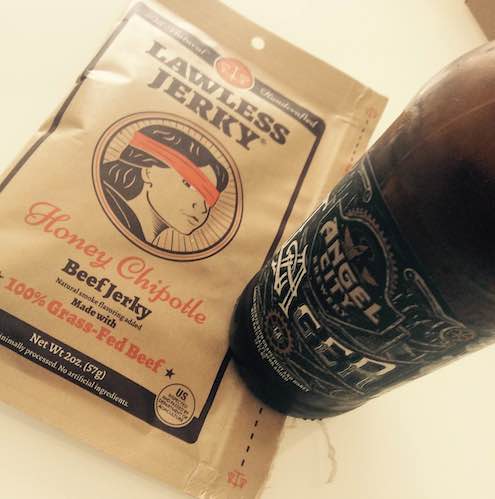 The beer is from Angel City. LAger to be exact. The jerky is from Lawless. Honey Chipotle flavor. (I also got Srirachelada and Sweet Sriracha jerky but that is too spicy for me, wish I had gotten the Aloha Teriyaki to pair with the Pilsner).

The jerky is well good but damn they could have turned up the honey and turned down the chipotle. The spice just grows and grows. Now I don’t know if the beer got warmed up in transport but it is a bit metallic and I remember the beer on draft was overly grapefruit before. Maybe the heat brings out a different side of the beer though because the honey is coming through clearly and does mitigate the chipotle heat.

OK, so I did try the Sweet Sriracha jerky. Wasn’t half bad. Again the heat overwhelmed my puny tolerance but it was less overtly hot than the other jerky and brought out more grapefruit from the beer too.