Each month I post about books and beer and podcasts and beers. The Pop Culture Brews podcast does something similar to fun results. They have a guest and they combine a type of culture and talk about beers and hone brewing.

It is thus fun on two levels. Check it out.

The de-voweling of company names continues at half pace with…

Now, you ain’t gonna get beer in ten minutes. It will take that long to download and set-up the app that you need and to order the special ingredients needed. If I was about to get married, this might be something to put on the registry but I have reservations that it will make you a witbier better than what you can buy.

Might be a shade too late to get all your home brewing gear and ingredients and then dive into the hobby of home brewing for tomorrow’s Learn to Home Brew Day. But you can start the process and be ready a week or more later and have your own private day. The recipe for 2020 and more can be found right HERE.

Part of me can fully understand why this might be true but another part asks the question of “if buying beer is hard then how is buying beer ingredients any easier?”

Will that ingredient access is difficult that could offset the cost savings of brewing your own? Also, in my opinion, quality has risen, so brewing a Belgian Wit could be cheaper but if Allagash White is around, why do it. You might have to wait in a line at Trader Joe’s but that pales in comparison to trying to emulate that beer or an IPA from El Segundo or a dark mild that matches Eagle Rock’s Solidarity.

Maybe price will win out and it will be interesting to see if it continues because if breweries close, a new generation of aspirational home brewers will be needed.

In case you missed this on Facebook last week (considering the weird Facebook-ian algorithms, that could be a lot of people), I just wanted to post this up as a reminder to stay involved in legislative activities, especially when it comes to beer. 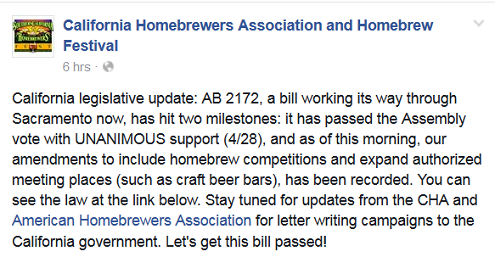 I don’t know if I could trust a beer geek that didn’t enjoy attending a home brew gathering. Not because the beer is always top drawer, but because the people are excited to show off their beers, even ones that they don’t feel are up to their exacting standards.

Here are some photos from my too short sojourn at the Pacific Gravity 20th Anniversary party. Thanks to Tomm for hosting and thanks to Brian Holter and all the home brewers who shared their creations. (below the photos I will briefly talk about the beers that I tasted)

Club Dubbel – bit of burn. Some sweet dry finish. 20th anniversary.
Horchata Stout – nice and creamy. Spice and chocolate. My second place winner.
Pumpkin porter – a little thin. Not enough pumpkin or pie spice notes.
Blueberry wheat – this beer was 6 years old and showed it but still held up well considering.
Barleywine from Norm was really good, my personal favorite
Centennial Simcoe IPA did not work for me. The hops were at odds with each other. 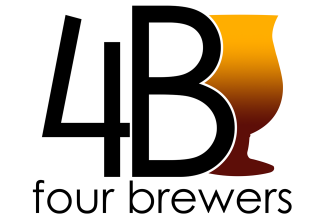 For 2015, I will be reviewing beer-centric podcasts that you should either add to your playlist or not, and our first review is of 4 Brewers.

Here is the description of 4 Brewers podcast from the website:

“Well, in short, we are Four Brewers with a microphone. If you are a person interested in listening to people talk about brewing, tasting blind, guessing beers by reading crappy reviews, brewer interviews, recipe formulation and other fun stuff, this is a perfect match for your ear buds. We’ll be releasing weekly episodes for your listen pleasure. Grab a beer and drink along with us.”

If the two podcasts that I listened to were any indication, then they should also add that it is mostly in-jokes and people talking over each other.  I am sure it is a blast to make.  All the participants seem to be having a grand old time.  But this “old-man” found it to be a bunch of noise and not a lot of information to be found.  Not that I need staid news readers informing me brusquely about how to formulate a recipe but it would be nice for the lead host to have a modicum of control and for the podcast to stay on point.  Instead of 45 minutes to an hour, it could be a tightly edited 20 minutes?

Maybe other shows are different.  Interviews with pro brewers sounds good.  But I will be waiting for other people to tell me to tune in.

Every little bit counts.  Even if you don’t brew on an industrial scale, you can be as cognizant about sustainability.  Creativity with spent grains is one step.  And that is where the book Sustainable Homebrewing by Amelia Slayton Loftus comes in. 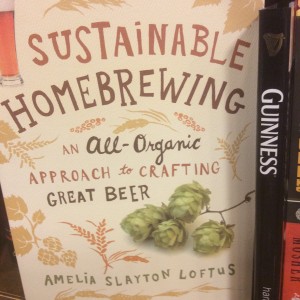 Loftus “covers the whys and hows of organic brewing, things to consider when buying equipment, and everything you need to know about organic ingredients (what makes them different, how to get them, and how to make substitutions). ”

And more importantly new to me considering the sun and lack of water in California, “You’ll learn how to brew sustainably by growing ingredients yourself, recycling water, using solar energy, and achieving zero waste.”

Jeremy Short of Pintwell is the host for the October beer blogging session and here’s the topic to write about, “I Made This!”

As I scanned through the list of the past 91 sessions I found only one about homebrewing. Only one? Well, we are here to rectify that with Session #92. I know that many beer bloggers don’t homebrew, so don’t worry I am going to keep this simple and straightforward.

The idea of this session is how making something changes your relationship with it. For example, when I first started homebrewing I wasn’t a big fan of lagers. After learning to brew I realized how complex and particular lagers were and I came to love them because of that.

It may seem mercenary and/or lazy to say it, but I have come to realize that I find it better to be a “friend” of home brewing than to do it. Once you cultivate friends who home brew, it seems rather redundant to do it yourself when you can show up and get a pint glass or a growler to go when it is ready.

I am not advocating befriending home brewers just to keep your refrigerator stocked with free beer. What I think is more important is being the drinker who isn’t secretly reverse engineering a beer while drinking it. The person who you can watch the game with instead of discussing the versatility of one yeast over the other.

Let’s face it, today’s home brew clubs offer a lot of good advice on what equipment works best, which techniques improve beer and recipe notes. You also have a wealth of information and programs on the interwebs to draw from. What neither offer is that consumer feedback that many will need to learn to decode if they decide to go pro and want to sell a beer to the masses. And even if they don’t want to brew at the next level, and brewing in the basement is just a hobby, someone has to drink the beer that is made so the brewer can fill up the carboy with the next beer.

Sure you can enter brewing competitions. You can bring your beer to the home brew club for review. You can foist the tolerable batches on family and friends but the person that can taste the beer and give constructive criticism that is different from the advice offered by fellow home brewers is important to improving the beer that a home brewer creates. Especially if they already possess a knowledge of craft beer and have the vocabulary to explain the aromas and flavors they encounter when drinking the beer.

That is who I am. I have dipped my toe into home brewing with success (if you are a fan of vinegar) and I know more than a smidgen of information about the brewing process. Enough to talk about it before the discussion gets too deep. I have also watched home brewing in action a few times as well. But I have just not been bitten by the brewing bug. I probably could gain an aptitude and make decent beer but I think my place is with the empty glass held out in anticipation of the next home brewed beer.

On a recent Saturday, I spent the day observing my good friend Richard from Travels with Cap’n  try his hand at homebrewing for the first time.  I say observe because I do not have brewing skills and did not want to muck anything up.  Also because another seasoned Brooklyn Kit homebrewer, Jennie was in attendance to handle the advice needs.

Observe in the camera sense as well.  Here are some photos from the day…. 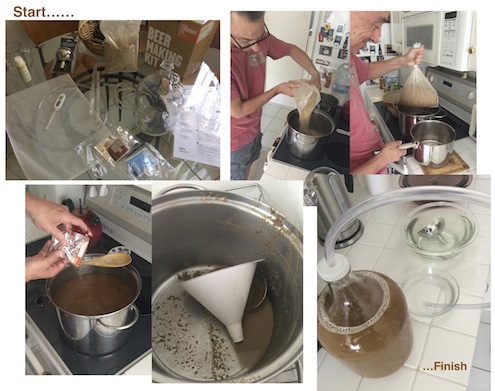 Everything went smoothly if slowly.  If there is one thing I have learned from the few home brews that I have witnessed, it is that you can’t have enough big pots and you can’t have enough ice to cool the wort down.  And that was probably the only issue with this brew.  A World Cup game fit easily into the time that the brewing took but being a first time that time will surely drop as Rich becomes more comfortable with brewing.

I was glad that he chose the Everyday IPA recipe because that is probably a pretty foolproof recipe.  Hops should cover up any small error. Speaking of, I think that the hop addition wasn’t according to schedule and a little too heavy at the start so the aroma may be a bit muted but aside from that, I can’t wait to see how this beer turns out.  Though I was a little peeved that no major spill occurred because that would have made for a much better photoshoot. Aside from some ugly hop residue at the bottom of the pot after the transfer to the carboy.