For these first two Oktoberfest reviews, I have made the unusual choice of pairing the beer with cookies. Diddy Riese cookies, to be exact. Now we move on to the second beer, Hofbrau Oktoberfest. 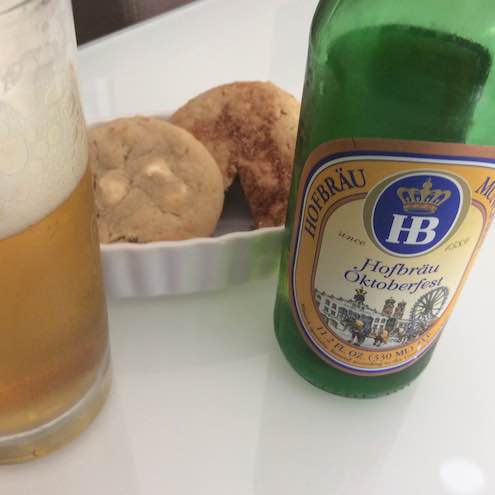 For this traditional Teutonic version, I have picked a cinnamon sugar and white chocolate Macadamia nut cookie to pair with the Oktoberfest in the (shudder) green bottle. The beer pours a dark yellow and has a much more Pilsner-esque aroma to it when compared with Left Hand’s more autumnal Okto.

Starting with the cinnamon sugar, the noble hop kick and fizziness of the Hofbräu beer struggles at first but settles on a slightly overlapping flavor profile. The minerality of the beer is at odds with the cookie though.

Nuttiness and sweetness of the Macadamia nut with white chocolate has a nice counterbalance thing going on but this type of cookie would be a beast to pair a beer with and this Okto though light can’t balance the cookie enough.

This month I bring you some fall seasonals. Two from either ends of the great state of California and one from where this whole Oktoberfest tradition began, Germany.

Just click that link twice to get a handy print out to guide your beer shopping.

And speaking of beer shopping, if you are based in L.A. like I am, you can turn your beer purchases into a free L.A. Beer Week hat! Bottle shops around town will be selling specially stickered bottles or you can pick up a logo’d cap like Eagle Rock or Browerij West and if you collect 12, you can turn them in for a cap. Caps for Caps.