A ray of good news came for Los Angeles beer fans as Hermosa Brewing announced on social media that their Torrance location is now operating.

This would be a good time to show some love to those brewing in the South Bay.

Hermosa Brewing is adding a new brewery and taproom location in Torrance on Del Amo Boulevard. This is their third location and second outside their namesake beach starting point.

When I had their beer at the Beach, I was quite impressed.  When I tasted it earlier this year at their El Segundo location, it had lost a little luster to my taste buds.

Maybe the new taproom will reclaim that lost ground.

Hermosa Brewing has a lovely seaside adjacent taproom but they share space with R6 Distillery up in El Segundo and Hermosa is taking advantage of the nearby barrels. They are putting beer into “fresh oak barrels from their awesome line of craft whiskeys. Last year we took the first steps in our collaboration and planted the seed for our barrel aged beers.”

The first two stouts on Friday July 23rd at our El Segundo brewery.

Hermosa Brewing has found a brewing home! It is a bit further up the coast and in the now crowded El Segundo scene. It is in the same brick building as the R6 Distillery which could yield some collaborations down the road.

Cold brew takes on new meaning when Wakey Wakey from Hermosa Brewing is on tap. Utilizing cold brew coffee from Later Days Coffee Co. this java inspired is one to look for while in the beach community. 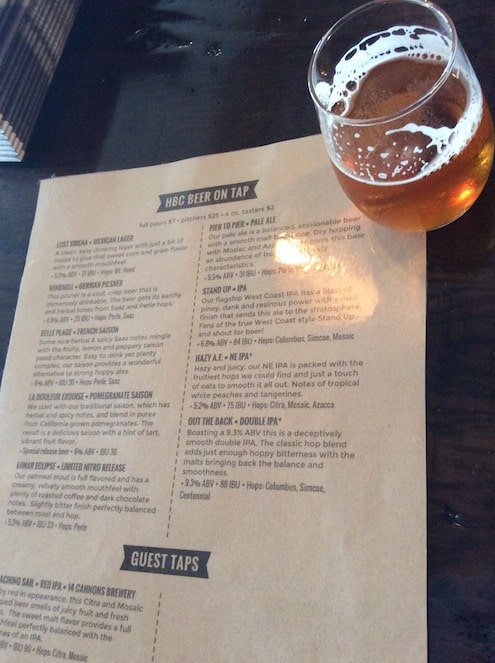 I took off on a Saturday morning and drove through the SoCal rain to Hermosa Beach within steps from the pier to the new Hermosa Brewing Company.

You can imagine that a beach adjacent location probably isn’t zoned for brewing beer and you would be correct. But the beers on offer are being brewed at much better locations than most L.A. gypsy brewers have used in the past.

Dave and Jorge, the home brewers behind this new brewery have dual brewing operations. One in Westlake Village at 14 Cannons and down south at Rouleur Brewing in the San Diego area. And it shows in the beers.
Hermosa Brewing 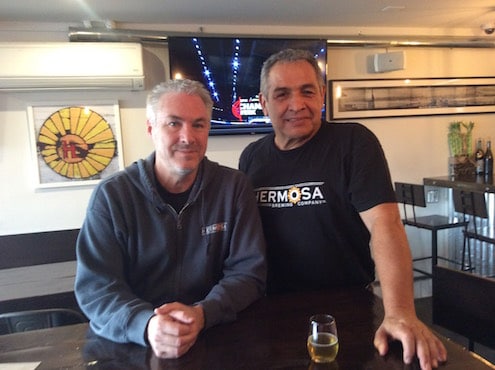 I sampled all but the two saisons and was impressed for a spot that has only been open for 8 weeks.

Both the Lost Sirena Mexican Lager and the Windmill German Pilsner were bright and tasty and all of the beers were crystal clear (minus one with “Hazy” in the title). That Hazy was probably my pick of the hop trio with the Out the Back DIPA being a close second.

And they even have food, not from a truck food. (Not that there is anything wrong with that) There are tacos, burgers and a tight menu of beer food that is great for the beers. 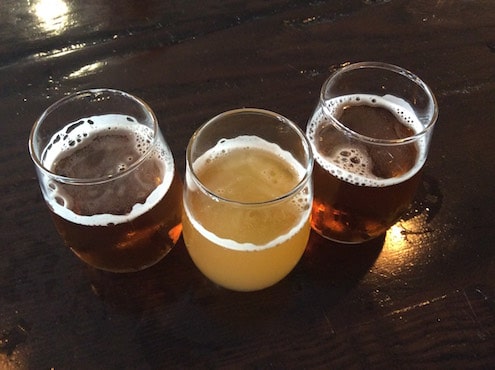 Currently, their Hermosa Avenue location is the only place to get the beers on draft as they build up inventory and contacts. No crowlers/growlers yet but this makes for a good trifecta of PCH pit stops that starts at Select Beer then heads to the King Harbor – Harborside and then to Hermosa Brewing.

There are some new breweries coming to the L.A. area in 2018 headlined (IMHO) by the Chinatown brewery / taproom of Highland Park Brewery.

But there are more in the pipeline that I will be visiting and reviewing, such as….

…and these are just a sample. There might be more in places as far flung as Pasadena, two new ones in Monrovia, literally right next to each other. One in Burbank, at least one in Long Beach.