When Alpine Beer Company became part of Green Flash, I thought it was a good fit. Fast forward and I was ever so wrong. You could probably say that the downfall of Green Flash kinda began with that acquisition. Fast forward again to 2020 and it looks like, if things break right, that the father and son duo Patrick and Shawn Mcilhenney might regain the ol’ system that that was Alpine’s home from 2002 to 2014.

The new company is Mcilhenney Brewing and they will start up again “after the current tenant vacates.”

The renter is of course Green Flash and once they move out, the new can begin.

For those of you who haven’t noticed, my writing on Food GPS has morphed from once a week to now every other week or so. The pieces are a little longer, the format is a bit different, a bit of a refresh for 2018.

So if you missed April entirely, here you go…

Last year, Silva Brewing wasn’t quite ready when I was in Paso Robles but this year, they certainly were and I made a beeline there first. 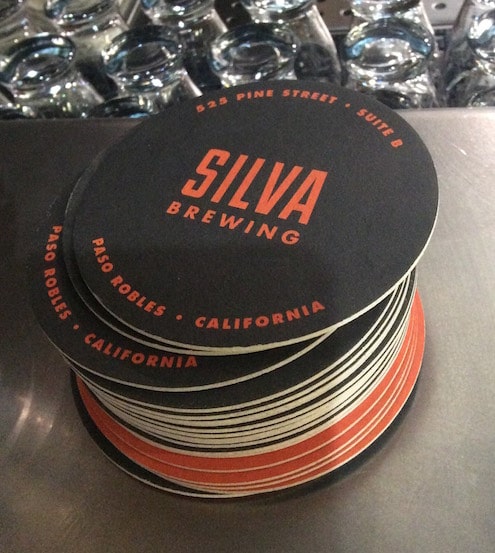 The small rectangular location is either in the Pour House bar or attached, or off the alley. Either way it is easy to find and I quickly had a flight in front of me in nice metal taster trays from the requisite tattooed bartender.

The taproom had the remaining strong shell of brewed beer even at 3pm the day after. Sweet wort aroma filled the room as the floor was being hosed down. 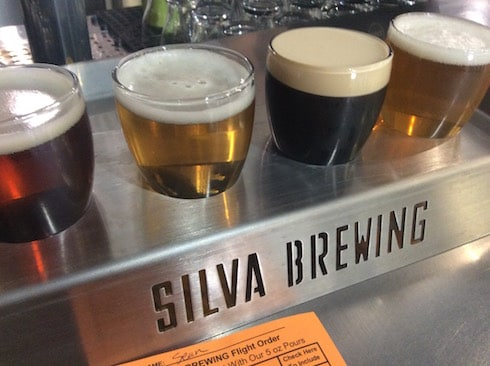 My taster tray included the Suite B German amber which was quite bready. There was both a sweetness and lightness that I don’t normally associate with altbier. A bit cloying and some green/young notes plus a malt/water combo that seemed to pervade all of the beers.
Paso Pale grain forward. Light hop bitterness. Grapefruit.

Next was the 525 Pine which had same malt lightness to it and not the hops of Green Flash while the Hop Maniac is bigger when it boils down to IBU’s but that same house malt flavor was there though the bigger hop aroma covers it better.

Lastly, the Nut Farm Nitro had a really nice aroma. It utilizes walnuts which I can’t eat even in brownies and though it was a bit too sweet for me the slight nutty texture really worked well. The nitro accentuated the cream and sugar aspect so it Might be even better on regular draft. 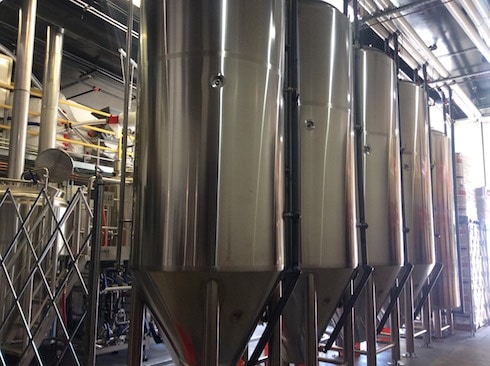 For the sake of science, I also bought a crowler of the orange peel saison to see if that house note carries through across more than two styles.

Silva is certainly a change of pace and is bringing new beer to an area dominated by two heavy hitters.

Some breweries fade in and out. I haven’t had Green Flash beers in a month (or two?) and then I go out and order Sea to Sea Lager and Soul Style – Tangerine in quick succession. 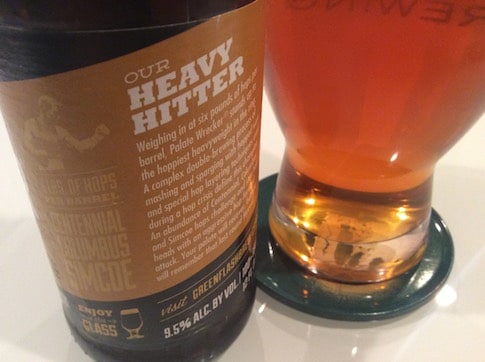 The very first sip puts you on your back foot. Very strong, piney and a bit astringent. You would think that what came next would be a heavy, near caramel malt texture to hold up the hops. But that never comes. As the beer warms, more tropical fruit notes start creeping in. I get pineapple in particular. The ABV isn’t what is front and center either. This is just straight up bitter.

The final flash is based on a Handshake. Here is what I thought of the Green Flash / Alpine collaborative IPA….. 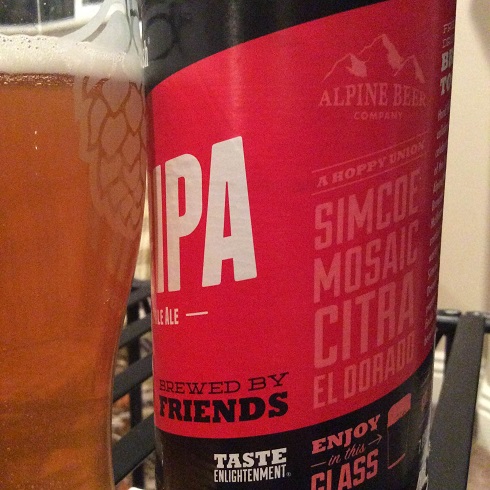 The aroma kicks off with a blend of floral, grassy and fruit punch notes but then things turn as the flavor goes strong with pine and fir notes. Nice peppy bubbles speed the progress along but a bold hit of bitterness brings the proceedings to a halt. Pepper and a near mint bite wrap the flavor up.

There is a good complexity here that stops this IPA from getting too dank that shows a deft brewing hand.

A new year. A new start. Time to resolve to be a better and more varied beer drinker in 2016. Hopefully, this blog will help you achieve that.

~ e-visits to three breweries from the pages of All About Beer magazine including Smartmouth Brewing Co., Saltwater Brewery and Black Mesa Brewing Co.
~ special featured reviews of IPA’s from Green Flash.
~ Heads-Up on Los Angeles Beer Events
~ Three suggested beers to buy this month. One light, one medium and one dark
~ A Book & A Beer returns!
~ I will tap the Firkin and give my no holds barred opinion on the craft beer world
~ … and Session # 107 covers the topic, “Let’s Be Friends” 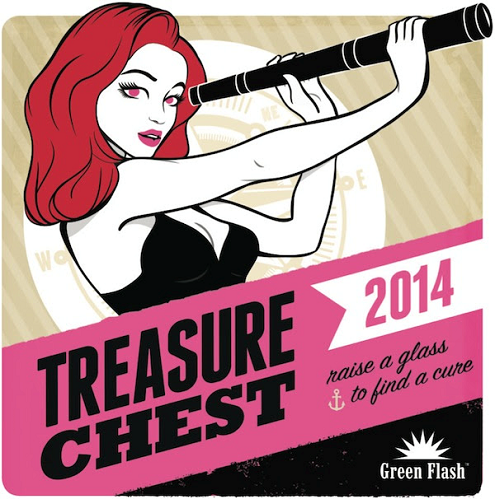 Green Flash Brewing Co. have brewed up their 4th beer in the “Treasure Chest” program, their annual beer release “to raise funds for breast cancer charities” The 2014 edition is a pink-hued Barrel Aged Saison with Plum that will be featured on tap at every Treasure Chest from San Diego to Virginia Beach event through the end of October 2014. Green Flash will donate one dollar from every full pour of Treasure Chest beer sold to a breast cancer charity in each of the cities where events are being held.”

Someone should really draw up a website that features charity beer and their related events. It is hard to keep with them all.

6 Hoppy Beers to be released throughout 2013. That is the trip or “Odyssey” for Green Flash and these beers are not just limited to San Diego! They will be on draft where you usually drink Green Flash.

Here is the info on the planned beers:

February – Black IPA:
“This American-style Black IPA is nearly jet black and perceived to have high hop bitterness, flavor and aroma with medium-high alcohol content, balanced with a medium body. The appearance may trick you into thinking you are about to enjoy a traditional stout beer when in fact your senses are about to be overwhelmed with our Black IPA. Juicy, fruity, floral, and pine from Pacific Northwest hops gives the beer a classic West Coast IPA hop character. The Black IPA is further characterized by a balanced and moderate degree of caramel malt and subdued dark roasted malt flavor and aroma.” 7.2% ABV, 85 IBU
Hops used: Warrior, Citra, Cascade

April – Imperial Red Rye IPA:
“Bigger, bolder, and hoppier is what you get in Green Flash’s Imperial Red Rye IPA…how unusual! This is quite possibly the most amount of flavor that can be packed into a glass of red ale. Columbus hops set the stage for the newly available Mosaic hops (released in 2013) to shine through the rich crystal malt base and a touch of rye malt adds a spicy dryness to accentuate the hop character further.” 8.5% ABV, 80 IBU
Hops used: Columbus and Mosaic

June – Citra Session IPA:
“When new and unique ingredients become available we often feel inspired to make a new brew highlighting that ingredient, here we are highlighting a newer hop variety called Citra. This pale gold Session IPA is brewed with high quality Maris Otter and Vienna Malt but the flavor is dominated by the Citra hop. 100% Citra hop is used to bitter and flavor the brew with additional Citra in the dry hop for aroma intensity. Citrus notes of lemon, orange and grapefruit are the main traits of the hop with light floral and lemon grass undertones. The abv at only 4.5% makes this hop laden brew an easily sessionable quaffer.” 4.5% ABV, 45 IBU
Hops used: Citra
THIS IS THE ONE THAT I BE WATCHING FOR (RIGHT AFTER THE CEDAR PALE)

October – Symposium IPA:
“We originally brewed this beer for the 2008 Craft Brewers Conference for the attendees that came from all around the world. The 2008 Symposium IPA was brewed a la San Diego Style with inputs from several brewers around town. This IPA is highly quaffable, pale copper in color, and lighter in body with a profound emphasis on hop extravagance as we added hops at every step throughout the brewing process. We all enjoyed the beer so much that we just had to bring it back for our 8th Anniversary in 2010. Now it’s being released as key brew for our 2013 Hop Odyssey”. 7% ABV, 75 IBU
Hops used: Simcoe, Tomahawk, Amarillo, Cascade, Centennial

December – Double Columbus IPA:
“Brewed with 100% Columbus hops this double IPA is an absolute Columbus hop bomb! Its resinous hop character comes through with huge grapefruit zest and pine notes throughout the brew. The big juicy, fruity, citrus hops add a resinous and almost sticky hop presence in the body making the medium body from crystal malts seem even richer and fuller. This is a hop head’s treat!” 8.8% ABV, 98 IBU
Hops used: Columbus

Maybe San Diego will become known for Saisons soon thanks to Green Flash. 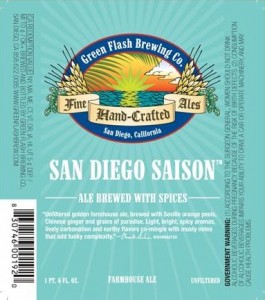 I wonder if this was brewed in their new facility?

They also will be soon releasing Treasure Chest – a Belgian-inspired Pale Ale.

Hollywood got treated to an awesome line-up of Green Flash beers last night. I had a tasting flight of four beers and I still could have had two more flights of just their beer. Chuck Silva came up from Vista to talk with the drinkers in attendance.

Green Flash is known for using teheir fair share of hops but the beers that worked best for me was their 30th Street Pale which was almost a session IPA. It had a great citrus taste without a bitter hit at the end. The other beer that I enjoyed was the Coffee Stout. It had a nice blend of coffee, chocolate and bourbon flavors mixed into a nice smooth brew. The other hit of the night amongst my drinking companions was the Saison. Nice and light with an excellent light yellow look.

Click HERE to get to the LA Beer Week site