News broke yesterday that the Golden Road expansion to Oakland (specifically the Temescal neighborhood) is kaput.

This was due primarily to community opposition from both residents and the Bay Area Independent beer world but was probably helped by the troubles that SABInBev – Golden Road – Sacramento has been having with noise issues amongst other complaints.

Whether this is a harbinger of future expansion plans or just a roadbump will be seen as years pass but what it does show is that Bud will need to pick sites in a much more careful manner because they do not want to have their craft cover blown.

It was blown in San Diego for 10 Barrel and then again in this instance and considering that transparency is not Dilly Dilly, a third strike might cause exponential PR damage.

My best guess is that these satellites are not long for this world. Restaurants are a fickle business and not in the Bud wheelhouse so if the costs start to run, they might too. Or they will transition them to other uses.

Did anyone at Golden Road talk to their Dilly Dilly? Why is their a Def Leppard collaboration beer in 2018? 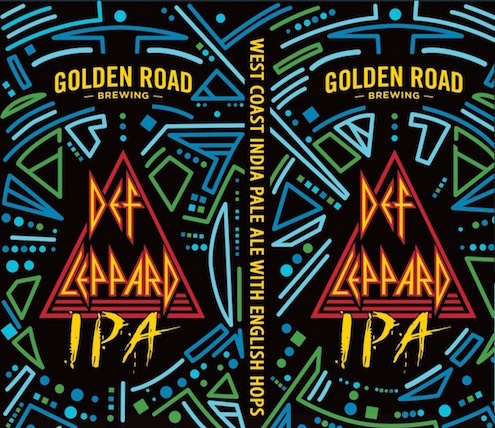 Must be some hysteria to cause this type of Armageddon it. Also, whoever designed this faux-clip art Pyromania label should be taken back to art school. I am a guilty appreciator of the DL music (not the hair), I mean this song and video is awesome. The outro riff is great.

But this is 2018. Get yourself Kendrick Lamar or T-Swift Budweiser. Brew up a Hefe or do a Pour Some (Belgian Candi) Sugar on Me Dubbel.

John Verive from the Los Angeles Times scored an interview with Tony Yanow, late of Golden Road Brewing where the topic of GRB being “Built to Sell” was brought up. The charge was categorically denied. Later over on The Full Pint blog (which I follow), they categorically denied that denial.

The question though and the word choice lead to an easy dodge. From a timeline standpoint, Golden Road opened the same year that Goose Island was sold. Which means that unless GRB was awfully good at prognosticating into the future they were not developed and built and brewed to sell. At that moment in history, there were no buyers save for ABInBev but their buying spree days were years ahead of them.

Since I love me an analogy, it is like asking me if I was planning on cheating on my wife, before I even met her. Of course the answer is no. It is a pass a lie detector test super easy question. Thus the question is dodged all because it was phrased in a certain way. The deeper and harder questions are left on the table. Questions such as, Who voted for and who against? Was the L.A. beer scene and its future taken into account? Add in your concern here.

Now I haven’t and won’t cheat on my wife because it is morally wrong according to how I live my life. Selling to SABInBevMiller (if I had a brewery or stake in one) would also be off the table according to my code. That breaking of a moral code is the concern that craft beer fans harbor and until it is addressed by those in charge at GRB, those fans won’t have the closure they want and will continue to vent.

But the beer fans don’t get off the hook that easy. That pesky word “built” is code in some of their circles for “too big”. Big being a bugaboo for many a craft beer fan. Because, ya’ know, small is ALWAYS good. Insert sarcasm emoji here. Stop me if you have heard this rant from me before but you can be a big business and still be a moral and upstanding member of the community. And you can be a giant asshat and be a small business. There are some who see any brewery that starts big as evil from the start. GRB got a fair share of undeserved crap just for the desire to grow big from the get-go.

I am no apologist for their actions. In fact, I had hoped to not write about GRB at all and wait for them to win me back with a fantastic beer. I just want the focus to be where the actual decision was made and why it was made at that point instead of castigating a company for growth plans.

Now that I am back in the groove of reading, I thought it was time to get back to pairing books with beer on a semi-regular basis.

The book is “The Water Knife” by Paolo Bacigalupi. (Maybe next month, I will do “Go Set A Watchmen”, or not) 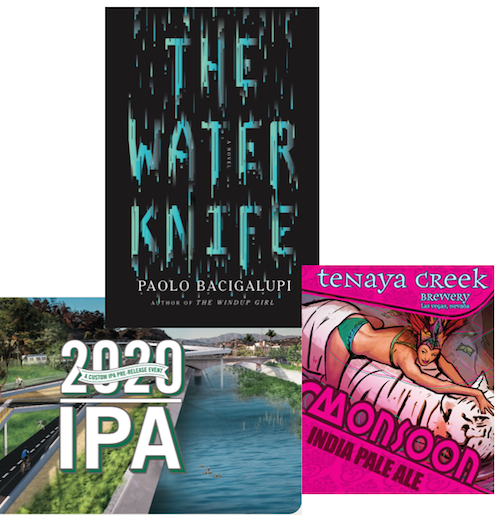 I read the previous Bacigalupi book, “The Wind-Up Girl” and thought it was a fun summer/potential movie script.  And his latest follows along the same road, pretty stock characters doing pretty stock things though the ending does toss a curve ball that attempts to “dirty” up the pretty finale.  What is frustrating to me is that the setting and backdrop could be used for so much more.  Drought and who controls the levers of the water supply is a rich vein to mine.  The movie Chinatown worked the edges hard without digging too deep into it and the Water Knife and it’s lead character, Angel could have really been fleshed out and into something deeper.  On a side note, Angel as a name doesn’t work for men or women anymore.  Way too laden with imagery.  If it was a modern day mystery or thriller, I probably would have read it and put it aside without a thought. But this book practically asks for more.

The easy beer to pair with it would be 2020 IPA from Golden Road.  This hop bomb was made in conjunction with the LA River 2020 project so you have a nice water tie in and since Calie’s are the “big bad” of the story it works.

A deeper cut could be Tenaya Creek and their Monsoon IPA.  It combines the Vegas that is a major part of the story with a heavenly torrent of water that would have really, really been welcomed in this bleak future.

I had planned on maybe taking my Mom out to a simple tap take-over tomorrow.

But with Tomm Carroll being called away from hosting duties for “So You Think You Want to Open a Brewery, Volume IV”, I will be filling in as moderator.

Here are the details and I hope to see you there!
“Held on the lawn at the Pub at Golden Road in North Atwater Village, the panel will get under way at 7:00 p.m. on Wednesday, June 24. Admission is free and draught beers from the breweries represented on the panel will be available for purchase. Participating breweries include Golden Road Brewing, Hand-Brewed Beer, Mumford Brewing, Santa Monica Brew Works and Solarc Brewing, along with such breweries-to-be as Angry Horse Brewing, Arts District Brewing, Brewyard Beer Company, Dry River Brewing, Indie Brewing, Lucky Luke Brewing and Transplants Brewing.”

Another IPA from the blue building at Golden Road is in cans now, Ride On IPA at 6.4% ABV is supposed to have notes of melon and pine and be perfect for skateboarding. Will I find that, or something else? 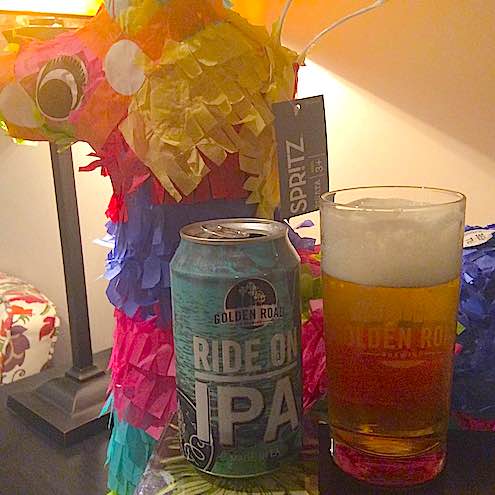 Ride On pours a light yellow with a rocky head of foam.  The aroma hits me as honeydew melon and spice.  So, yeah. The description matches my tastebuds.  Additionally there is a hit of grapefruit juice that is almost rubbing alcohol-esque.  But that rises and fades pretty quickly.  This IPA seems a little more viscous than biting on the tongue.  Which is not what I was expecting at all.  It is certainly an IPA that is less like most of the market for sure.  I would label it as a change of pace IPA.

Fan’s of Tony’s Darts Away know of their weekly Tuesday’s at Tony’s series where a brewery will be featured or a beer style or food pairing will be the attraction.

Now you can also follow Travels with Tony (as I call it).  See some really cool brewery and distilling photos from European travel and see where you might want to lift a pint, when you travel next.

The food and beer pairings are coming too fast to keep up, almost.  Here is another one to add to the list….

Check out the full menu, HERE.

The big news this week (apologies to Stone in Deutschland) is the move of rightly famed brewmaster Victor Novak from OC to LA as he will be moving to Golden Road Brewing (so much closer to me) from TAPS.

This move leads to many Questions with a capital Q:

~Will this mean that the GRB haters will pause or will they find another excuse to complain?

~Who will take the reins at TAPS?  ‘Cause past proteges have done VERY well.

~What will change at GRB?

~Will the barrel program get bigger?

All will have to wait until September when the move happens and probably later to see how the fit is. 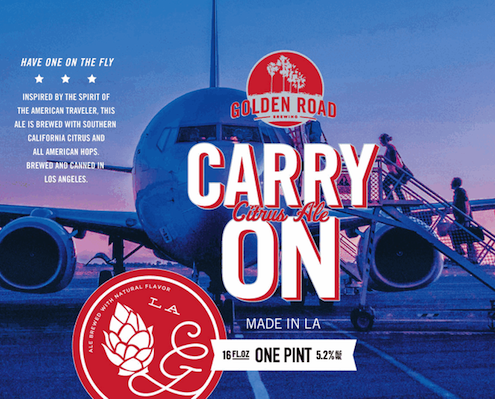 Or just wait for my next plane trip because….”Those flying through major California cities, Phoenix and Las Vegas this Fourth of July will be the lucky first (of many) to taste the adventure-driven beer before a phased roll-out to more than 30 airports by the end of 2014. ” according to the brewery press release.