No Great American Beer Festival for the second year in a row. The return has now been marked for Fall 2022. This year will be a combination of the brewery passport that they used for last year along with the Craft Brewer Conference and Denver Beer Week aligning in September. The awards will go on too and will be broadcast just like last year as well.

Obviously this was the safest option. They may well have been able to hold the event considering the vaccine rollout is over 17% now but any setback between now and September would have led to concerns. Not to mention that any festival this year would probably have to temperature check everyone or check their vaccination cards. Not to mention – Part 2, that they would probably have to reduce the amount of attendees drastically.

We complete the year of brewery tours with a stop in Martinez, California for some beer from Heaven…

Del Cielo Brewing Co. got a gold in the fruited sour category for Guava Dreams. Let’s see what other beers I would order up for an initial taster tray.

Orale – “This traditional Mexican style beer celebrates Hispanic heritage with its light body and crisp finish. We used Saaz hops for a soft bitterness that brings an aroma of herbs and spice. With only 9.4 IBUs, this refreshing beer is perfect for summer enjoyment.”

Hoptinez IPA – “Hoptinez is a classic American IPA with a great copper color. Its tropical fruit aroma and strong stone fruit flavor comes from Citra and El Dorado hops. The profile is clean and crisp with a pleasantly bitter finish.”

Coisa Mais Linda – “Caipirinhas, the national cocktail of Brazil, inspired us to craft this version of our Cocktail Series. We threw in a Colombian twist by using the feijoa fruit and then added some pineapple to round out the juicy and sour tropical flavors. Each sip shines bright with notes of guava and pineapple and hints of apple and strawberry. Pink Himalayan salt accentuates the flavors of this Gose style beer.”

Our second GABF success story comes from Golden, Colorado. Cannonball Creek Brewing Company came in 2nd in the medal count in 2020. Check out their results…

Let’s look at what you and I could put in a taster tray….

When I saw that a strawberry zwickebier had won Gold at this year’s GABF, I knew I would have to look into it. It came from Bellingham, Washington and the Twin Sisters Brewing Company.

Let’s see what else I would order next time I am in Northern Washington State.

Pilsner from Now On – “A brilliant gold Pilsner made in the classic Czech style. Spicy and fruity noble hop aromas. Smooth body and a crisp finish.”

Chap ESB – “Our Brew Boys’ take on a traditional ESB (Extra Special Bitter). With light hoppiness, aromas of marmalade, and soft caramel flavors reminiscent of pie crust and toast, this English pub-beer is the perfect ale for quaffing on a rainy day.”

Shift Bier Dortmunder – “Brewed in the traditional style, this pale lager is recognized for its firm bitterness, soft malt character, and unique minerality stemming from the hard water characteristic of the region. It’s slightly more malt-forward and higher in alcohol than its non-export counterparts but retains all the drinkability of a lower gravity lager. Dortmunder Export Lagers were historically a beer brewed for 19th-century German industrial workers, who would quaff it after long shifts at work.”

One of the event casualties of the virus was the Great American Beer Festival (GABF) which sucks for many reasons. It has been a reliable revenue stream for Denver area breweries, the Colorado economy and the Brewers Association (BA)  Due to the loss of their marquee event, the BA has had layoffs, most notably of the hard working and traveling Julia Herz who I have had the pleasure of hearing speak on a number of occasions.

As that news hit, the GABF announced the 2020 version of their event which is a t-shirt and a passport. That passport “will have exclusive access to beery deals at participating festival breweries nationwide, and access to exclusive online content October 16-17. Online content will include Brewers Studio happy hours, tastings and interviews with brewers from around the country.”

I would love to see a behind the scenes of the judging. I know this year is not normal but I think it would be to get a peek at the process of one of the biggest aspects of the festival. I also think they should have a monthly countdown to next year’s event to keep GABF in people’s minds.

The Great American Beer Festival (GABF), the big beer festival on the calendar is not going on as in the past. Instead of September 24-26 at the Big Blue Bear and in person in Denver, it will now be an “immersive online experience October 16-17.”

Though this sucks for the beer community and the breweries and bars in Denver that saw a big attendance boost, it was not a decision that comes as much of a surprise considering how 2020 is shaping up to be a year filled with bad news.

According to the Brewers Association, the virtual GABF is still in the planning stages but expect to see beer tastings, brewer interviews as well as food and beer pairing ideas possibly with a delivery of beer angle as well.

The good news is that the beer competition will take place in 2020. Will Pandemic beer be a style category?

I see this as a golden opportunity to try out crazy ideas and also how to incorporate more of the country into GABF since plane fare and time away is now off the table as an excuse not to go. And if all goes well with the re-openings, maybe smaller, mini GABFs can be held around the country. I vote for any wacky plan.

The votes have been tallied for 2019 and you can click HERE to see the winners from the Great American Beer Festival. Let’s rundown the Los Angeles medal view….

First though, let’s say upfront that only 2,295 breweries entered. California has 1,000+ breweries so this competition, though by far the biggest really only covers a percentage of beer in the US. Think of it as a snapshot in time.

Also, there are some weird categories. IPL is mixed with malt liquor. And some categories are only filled by 30 beers in total. And what makes a beer fit the “Emerging IPA” category?

On to LA, Claremont ring up gold for Station 101. Ambitious Ales bronze for their Friends-ian Central Perk coffee beer. King’s Brewing out in Rancho Cucamonga bagged two medals. Perennial favorites Beachwood and Firestone Walker each won but not as much as years past. Arrow Lodge and Ogopogo represented for Jungalo Juice and Boeman Witbier. Bluebird Brasserie won bronze for their excellent Stay Golden Belgian Ale. Gamecraft of Laguna Beach gave me another reason to finally visit with a medal in the coffee stout category.

What really made my day was Highland Park winning gold for Timbo Pils. Such a great beer. Also Evan and Brian at Green Cheek had a day with Gold for their Australian for Pale Ale and then a silver for Radiant Beauty in the ultra-competitive American IPA category. Well deserved.

What exemplifies the GABF awards are the apply moments and I leave for you with the one where Breakside Brewing of Portland was on stage, getting the glamour shot with Charlie Papazian when their name was announced as gold medal winner for another category. Brewer Ben Edmonds could not contain himself. He jumped up, bent over and was “in” the moment. That is what this whole revolution is about.

I have saved the double winner for last. Ann Arbor’s Wolverine State Brewing picked up both Silver and Bronze this year.

In addition to those winners, I would add the following to my taster tray….

Tundra King – “This new addition to our IPL lineup is in contrast to many of our other IPLs and hop-forward lagers because it’s even more injected with hoppy and bitter goodness!”

Gulo Gulo – “India Pale Lager (I.P.L.) is hopped with Cascade, Chinook, Columbus, Warrior and Pilgrim hops. It is dry-hopped once in the fermenter and then a second time with whole-cone Cascade hops before packaging.”

Barista – “We brew this beer in collaboration with Roos Roast of Ann Arbor. Karl the Brewer used to be a coffee roaster before joining the brewing world and so we put him in charge of the coffee side.”

Our second Medal Winning stop is bemusing, Smylie Brothers Brewing Co. in from the city of Evanston. SBBC won silver in the Fruit Wheat Beer category for Purple Line, a wheat ale brewed with hibiscus, blueberry and blackberry. This beer is no stranger to hardware as it also won GABF medals in 2015 and 2017 too.

So with that lineage, here is what I would sample in my “imagined” taster flight…

Grisette – “Light in body and low in alcohol, this saison is brewed with spelt, an heirloom variety of wheat. Floral aroma with notes of lemon and citrus. Very dry, crisp and refreshing.” 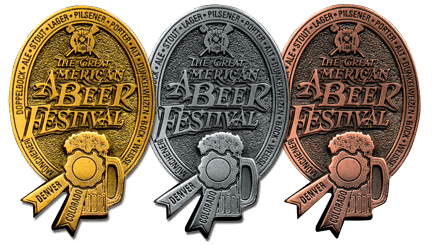 The awarding of the medals happened in Denver yesterday at The Great American Beer Festival in a production better paced and funnier than the Emmy’s, the Brewers Association live streamed their awards for 2018. It took an “unpacking” team three + weeks to sort the 8,864 entries from 2,404 breweries so that medal worthy beers could be tabbed.

Considering how many breweries we now have, that is a decent-ish showing. Orange County (especially Green Cheek) got called on stage more, as did San Diego naturally. With San Diego edging out our OC cousins barely but both in double digits. From here on in, it would be good to see our own mark of ten

One of my favorite breweries, Firestone Walker got two medals in kind of weird ways. They won silver in the brand new Collaboration category for their work with BarrelWorks on Pixie Dusted tangerine sour. And they won for Feral Brut, a beer not being released until next week.

Figueroa Mountain picked up a trio of wins on the day as well bringing their eight-year total to 23!

Other notes:
Two babies got the Papazian fist bump.
Winning Juicy/Hazy Beers were primarily from the south and Mid-West
One of the winners from Texas had. Beto Election Beer shirts on.
Loved that the Chuckanut Brewery has sub-named it’s two locations, North Nut and South Nut