I have seen some All Together cans hitting the market but I went with the one that would deliver to me. Mostly because I wanted to test how it worked. So without ado, how did Frogtown Brewing do with the Other Half recipe…

.. this is quite the strange beer. The initial aroma was a weird mix of menthol and mint. I thought, at first, that something was amiss. But as the beer warmed up, the gentle palate brushing bitterness kicked in and some fruit punch notes started to come into play. I am going to let my other can sit a bit and see if time is needed for the flavors to come together.

Frogtown Brewing is hitting an anniversary mark and part of the celebration is their 2nd Tiki Series IPA, this time they are going back to an old IPA sub-style. 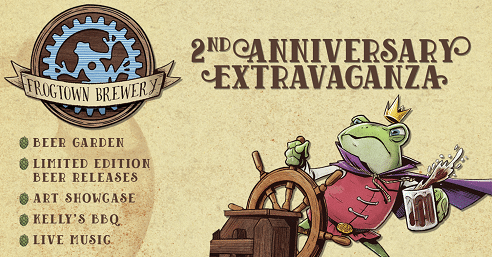 Frogtown Brewery (how time flies) celebrates reaching the 2nd Anniversary on Saturday, September 29th and they are taking it big.

They will have an outdoor beer garden with two additional bars. Live music all day and multiple food vendors and artwork from local illustrator Patrick Ian Moss.

But the important part is the beer. First up are the new and special beers:
– first barrel-aged beer for the occasion — Prince George Bourbon Barrel-Aged Imperial Porter with Madagascar Vanilla Beans. There will be a limited supply available for sale in beautiful 22oz hand wax-dripped and numbered bottles.
-release a new tiki-inspired milkshake IPA, Painkiller
– beloved Broken Vessel Imperial Pumpkin Ale will be making its once-a-year comeback.

Here are the details for this ticketed event:
Time – 1pm to 11pm (12pm to 1pm: VIP-only hour)
Tickets – Available for sale in the taproom or online
This event is 21+ ONLY

There was a rush of brewery openings at the end of 2015, and now thanks to my source at Food GPS, I have two more on the radar that we might see in 2016 or later depending on how the City of Los Angeles moves paperwork through the system.

Silver Lake Beer is one of the new ones which hopefully will have parking. FrogTown Brewing will try to work through the system in a neighborhood that is a little anti-brewery right now.

Right now the information on the ground is a little sparse but as they develop, I will post the updated information.