For me, relax and unwind sounds fun but Prince George Day might be the most popular for Frogtown.

The Brewers Association releases their annual, Fastest Growing Breweries List.  I went down the list with us Angelenos in mind and found two breweries at the tail end of the top 50.

Frogtown Brewery which is tucked down side streets just off of Fletcher near the 5 Freeway landed at 43 and then right behind it is a Long Beach brewery, but not the one that I or you probably expected.  Dutch’s BrewHouse.

I have visited Frogtown a couple of times and they can their blonde and IPA’s but I did not peg them for having had a big growth spurt but then again, I had not heard of most of the breweries on the list which probably speaks to the fact that the really small are enjoying the biggest gains in the current low growth time.

I guess I will need to add Dutch to my list in addition to Ambitious Ales for my next Long Beach visit and see what they are doing right.

Here is your handy link spot to read them….

I posted up a notice about the Frogtown 2nd Anniversary. But since I am crowd averse and pro-leftovers, I headed over on Sunday to see how this hidden little brewery is doing with their beers. 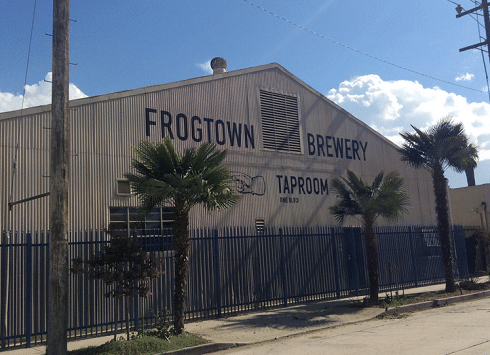 I ordered up a taster tray of beers that were new to me from the brewery. Here are the quick recaps….

Whipple Street Cream Ale
Crisp and malty with a touch of mandarin orange. Little hoppier than than expected. Liked it.

Nebula Fog IPA
Serious and off putting grapefruit rind going on. Hazy in appearance but rough and bitter. 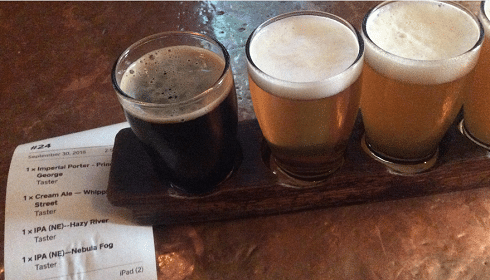 There was a nice sized Sunday crowd going. Atmosphere was very chill and very dark. There were a few new additions to the decor but it still looks like a steampunk library work in progress. There were 9 Beers on tap and the fridge was filled with Kinky Blonde and more Feather It In IPA cans.

I probably should have picked up the Broken Vessel pumpkin beer as well to see if it is still a winner like it was last visit but overall, they seem to be growing slowly.