Tomorrow over on FoodGPS, we talk about making a beer for your wedding reception with Enegren Brewing and the Four Points LAX.  So I thought I would pass by some wedding themed beers for your perusal that I found on the RateBeer site…. 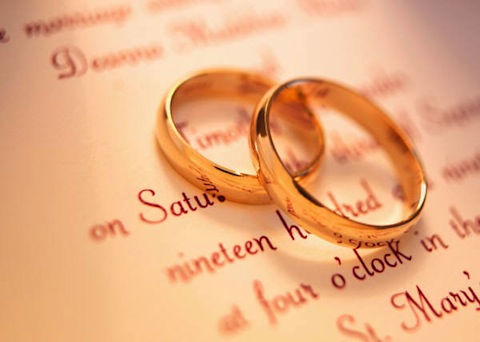 Boring (until made royal) 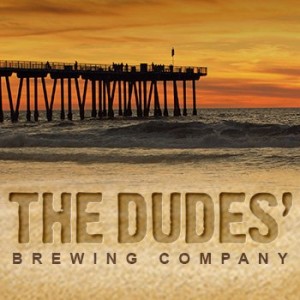 The Dudes‘ have been barnstorming across the southland.  Taking their new beers to bars far and wide.  I finally caught up with them at 38 Degrees in Alhambra and was finally able to try 5 of their offerings.  I will detail that all tomorrow on FoodGPS but for now a couple photos from the night….. 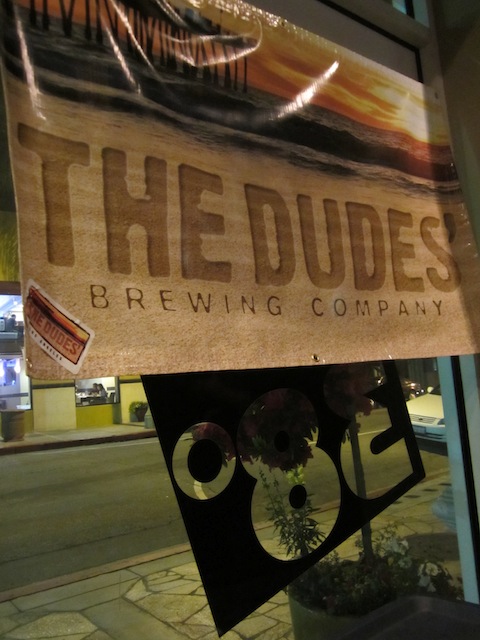 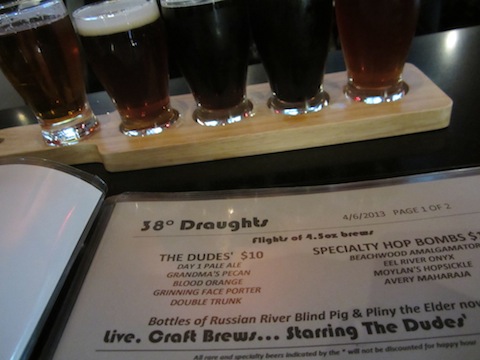 Tomorrow over on FoodGPS, I will cover some beer books that you should be reading. 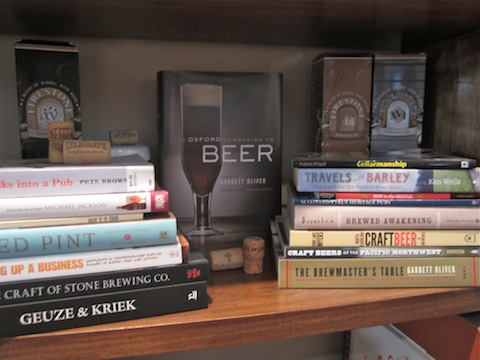 But if you would like to catch-up on some past beer book reviews than follow the links to:

For the Love of Hops / Hop in the Saddle / Gueze & Kriek / The Allagash Cookbook (OK, this one is not a review)

I leave L.A. for a week and head to Italy via beers that were sent to me from 32 Via dei Birrai. The story will post tomorrow over on FoodGPS but I wanted to show off the cool packaging that they do for their flavorful beers.

Thanks to the largesse of the folks at Firestone-Walker, our humble band of L.A. Beer Bloggers caught a bus at Union Station early on a Saturday morning and made the trek to Paso Robles to partake in the beer culture created by David Walker, Matt Brynildson and the rest of the F-W crew.

I will use words in tomorrow’s FoodGPS post to paint a summarized picture of the weekend, but here are the final set of photos from that epic journey…. 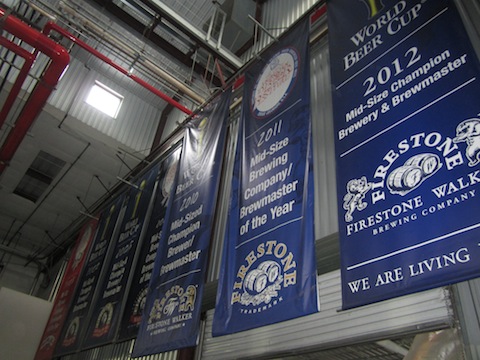 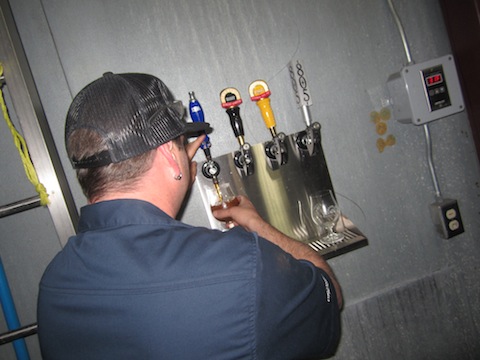 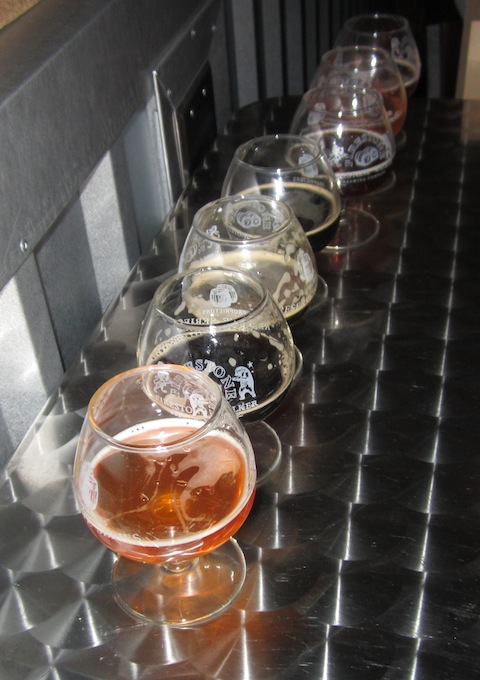 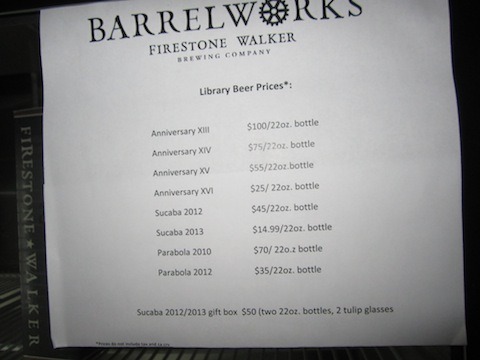 Tomorrow on FoodGPS, I head to The Bruery to check out their Batch 1,000 homebrew contest. (Information on the winner will be there tomorrow)

Here are some photos from the day…..

Tomorrow, I talk BBQ and the new Bludso’s on La Brea in my weekly FoodGPS post.

For today, here are some bottled selections that will go great with BBQ.

Full Sail Brown Ale – “The combination of 2 row pale, crystal and chocolate malts impart an array of malt and chocolate flavors in a medium bodied ale with an extremely smooth palate. Fuggle and Mt.Hood hops contribute a slightly spicy aroma and finish to complement this beer’s malt character.”

Anchor Bock Beer – “The dark satiny texture of Anchor Bock®, with its rich hints of chocolate, caramel and roasted barley, is our interpretation of the strong German beers that signal the coming of spring.”

or you could go with one or both of these XPA’s Holy Jim Falls from Cismontane (which was on tap at Bludso’s) or the Revolution XPA from Eagle Rock. 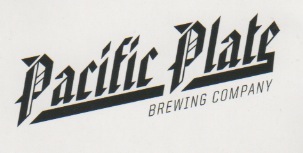 Tomorrow on FoodGPS for my weekly Brew and You column I head to Monrovia to tour another brewery in the works. Pacific Plate is in the midst of starting their production brewery and tasting room. 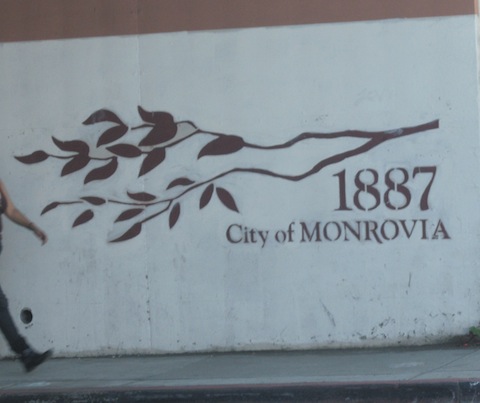 Tomorrow’s post talks about some of their activity but I want to highlight the beers that they have posted on their Facebook page because I want you to be ask for them once they start up in May.

Mango IPA
“A tropical take on an American-style IPA, this mildly hopped, medium bodied ale is brewed with whole cone Simcoe hops and flavored with Mango. The tropical notes in both the hops and Mango compliment the bitter yet mild finish.”

Widowmaker IPA (L&O Collaboration)
“A liquid tribute to the power of the hop, this American-style India Pale Ale is light in body and color but features a pallet assaulting combination of Chinook, Centennial, Columbus, Amarillo, and Cascade hops. Boiled for 90 minutes to extract the full potential of bittering alpha acids, this IPA well exceeds the taste threshold of bitterness at a whopping 120 IBUs. This beer can be mixed with fresh orange juice for a tasty and refreshing citrus beer cocktail. IPA originated in the Burton on Trent region of Britain in the 19th century. British beer makers were looking for a way to preserve beer that was being transported to British soldiers in India. They discovered that by adding more hops, which acted as a natural preservative, the beer would survive the lengthy and treacherous voyage.”

Trappist Dubbel
“This Belgian style ale is a rich malty beer with some spicy/phenolic and mild alcoholic characteristics. It does not have as much fruitiness or alcohol as a Belgian Strong Dark Ale but some dark fruit aromas and flavors are present. There is a mild hop bitterness with no lingering hop flavor. Look out for dark metallic caramel flavor from the dark candi sugar that is added directly to the boil. Dubbels are traditional monastic beers that have been brewed in Belgian Monasteries for thousands of years. This beer emulates the original Trappist Dubbels still produced today at the Westvlteren, Westmalle, and Chimay monasteries.” 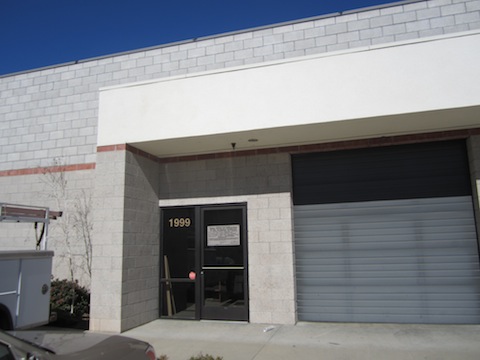 The Pacific Plate guys have a load of interesting beer ideas fermenting as they proceed to adding their equipment, so keep your eyes out and make plans to visit Monrovia this summer.

Early in January as the concrete was drying at the in-progress Smog City brewery, I was treated to a tour of the facility by Porter and Laurie the hard working duo behind such beers as The Nothing and Sabre-Toothed Squirrel.

I will talk more about what I saw and what I heard but check out some photos here…..

The “sign” that shows you that you have found Smog City 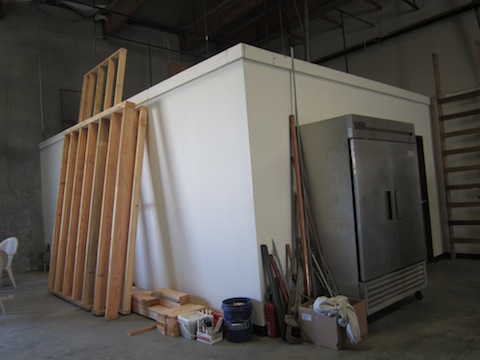 Remember this photo when you are sitting in their taproom.

And check out the info for their event tonight at the Venice Ale House….
“Come join TapHunter at Venice Ale House as we celebrate our LA launch with 2 of LA’s most promising breweries, LadyFace Ale Companie and Smog City Brewing. No strangers to one another, brewmasters and co-founders Dave Griffiths of LadyFace and Porter of Smog City once worked together at BJ’s Brewery before parting ways to start their own breweries. Now TapHunter is reuniting this duo, that represents both the light and darkness of the LA craft beer scene. Join us for a night of fun:

– Meet the folks from TapHunter, LadyFace and Smog City
– ‘Craft Table’ for the ladies we provide the t-shirts, ribbon, scissors; you provide the creativity! prizes for the best customized shirt!
– $5 pours, door prizes, burger specials
– DJ provided for the children

First 100 RSVP’ers, show us your TapHunter App and TapHunter will buy your first pint!”

Tomorrow on FoodGPS, I will be completely local (or is it loco) I will be talking about the latest bottling news from Beachwood, El Segundo and Angel City breweries. The beer of the week will be from Smog City and the homework revolves around the L.A. Beer Blogging community.

To give a little background on bottling, here is a video from an East Coast brewery that gives a succinct educational lesson….