Time to get foodie with Julia Child and the companion podcast to the HBO Max series, Julia.

Companion podcasts are a big thing right now. Any prestige series needs to have a podcast where the creators talk about making the show. And I can’t get enough of them.

That said, this podcast is 2/3 good. It is broken into a section re-cap which I skip by, one section talking to people involved with the show and a final section with someone from the broader food world. And there is some fascinating tidbits to be learned just about Julia’s husband Paul alone.

When it comes to beer, this is the time to globe trot like Julia did before and with Paul. Massachusetts. China. Sri Lanka. Holland. And especially France. So look for Biere de Garde, Grissette and Saisons. For bonus points pick up 1903 Lager from Craftsman Brewing in Pasadena where Julia was born.

I have to say that the moves that the California Alcoholic Beverage Control (ABC) have made during this pandemic have been mostly smart and effective. They moved with decent speed to allow beer sales to reflect the curbside and on-line ordering marketplace. Let breweries ship beer within the state and have loosened restrictions so that sidewalks and parking lots could be used as seating for patrons to keep that distancing effort alive.

But I am at a loss about this food and alcohol rule. Otherwise known as The Stuffed Sandwich for the great deli and beer lovers spot here in Southern California that operated under the weird rule that you could not purchase beer unless you ordered food.

Now that seems to be back on a larger scale for breweries wanting to re-open their taprooms. But what if I am a vegan and it’s a BBQ truck, or it’s a seafood truck and I am allergic to shellfish or if I just want a beer? Maybe they are looking to force breweries to help out restaurants?

Whatever the reasoning, I see people buying the lowest cost item and then not eating it. It has a two-drink minimum comedy club vibe to it. And it seems to put brewpubs into better position than taprooms.

Or am I reading this rule incorrectly? 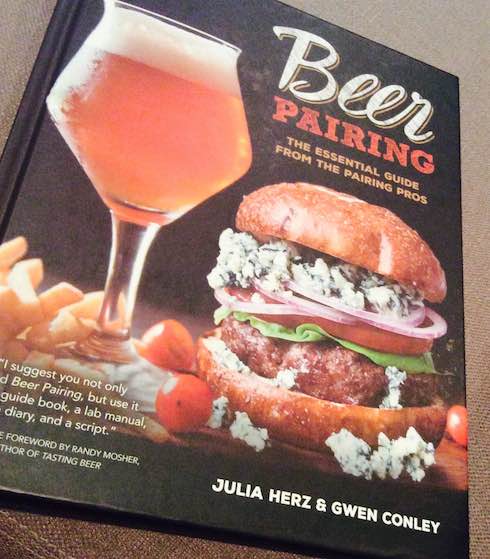 Sub-titled: The Essential Guide from the Pairing Pros, this book covers quite a bit of ground and is certainly a handy reference guide for setting up a major beer dinner or just to enjoy a dinner with family with beer that will really enhance the experience.

Julia Herz and Gwen Conley have come at the problem from a different angle. First how to talk about pairing and what the goal is. The typical Three C’s of Compare, Contrast and Cut are there but they add more nuance to those common practices. A wow moment for me was to think of intensity and bridges as just as important. What is the intensity of the food or the hops in that IPA? And are there friends of friends that can cart you over the bridge from the beer to the food?

There were other golden information nuggets in those first three chapters such as discussing beer in non-beer terms such as ice tea or maple syrup or flavors in relation to past food experiences. Did that beer remind you of your Mom’s cooking or a trip to Oregon? They also place, rightly, importance on What comes first? music (beer) or lyrics (food) when creating a craft beer dinner. But at 60+ pages of science of smell and other book learning, it came across more as a data dump as precursor to the good stuff later.

The graphs used were also hit-and-miss. Most did not seem to be organized in an immediately recognizable format and required poring over to see what should have been a distillation of information. The Potential Interactions chart of page 72 is a prime example. The type is way too small and there are too many columns with what appears, at first, as repeated information. But then the intensity beer tasting form is better…. 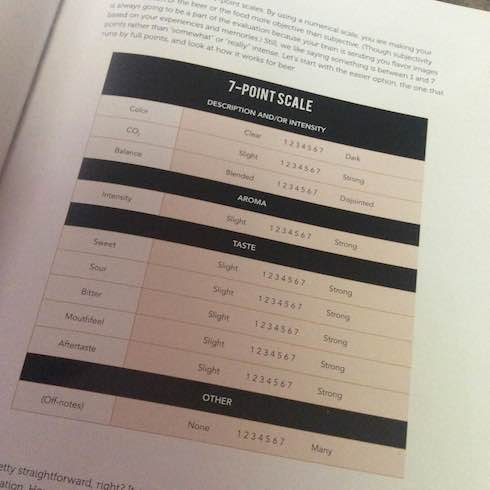 In between, is the Palate Trip graphic which looks a little too clip-arty and makes the really good idea of trying the same foods with different beers a bit harder to grasp. The authors use train wreck as the term for bad pairings and this is a prime example of one… 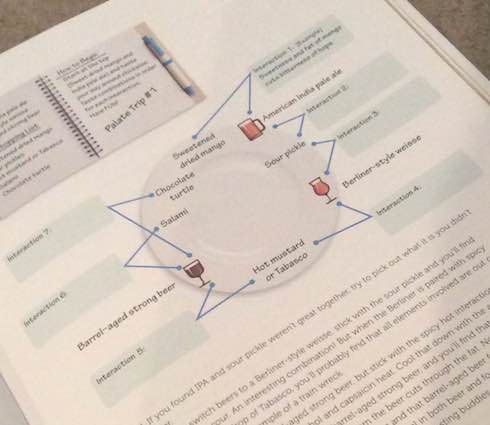 The meat of the book is well done. (Pun intended). The basic beer styles are covered with data for the super geeky and with a range of pairing suggestions that are both comfortable and outside of the box. I really like the idea of “Try this First”. You (or I) may not like that particular food, but reading about why they chose it can easily lead one to a different pick. Plus, I appreciated that nothing was way too fancy. There were fancy examples but this book is firmly geared to what even a rare occasion cook, like me, could accomplish with a little work.

The expansive section of chocolate, cheese and other strong pairing choices probably could have been folded in as sidebars to the main chapter since it re-covers ground already trodden.

Overall, the book has some solid reference points and I think adds to the beer library admirably.

Food and Beer go together like hand and glove and another time and place to test that theory is on July 26th,  when Angel City’s monthly Food Cluster Truck celebrates grilled cheese.  “Four trucks – Dogtown Dog, Slanging Corea, Canvas , and Midnight Mission’s culinary course – will take on the classic gooey goodness and make it their own for a chance to be a food truck favorite, earning bragging rights and a fabulous trophy. The event takes place on July 26 and runs 12-6pm. Voting boxes will be at each truck for patrons to submit their favorites, and voting will be counted at 6pm, with the winner announced at 6:30pm.”

I know that the word artisanal gets thrown out a lot (and spelled in many different ways) but if done with craft beer and food, it can really MEAN something.  Except for beer and porridge.  That ain’t gonna work. But this service seems much more logical and I wish I had put it on my Christmas list.  I just didn’t know about it until it was too late.

“Beer Dreamer is your guide to maximum enjoyment of craft beer. Every month, we lovingly choose two selections of the best craft beer for the dinner table, carefully pair them with artisanal foods, beautifully package and deliver the whole thing to your doorstep for a magical experience of taste and flavor along with educational and background content. We call this “The Culinary Beer Club.”