Our final Florida brewery opened their doors in October of 2010, Pensacola Bay. Hopefully, the backwards beer distribution legislation (SB 1714) that Florida is considering will disappear.  The Florida Senate passed it but as of April 29th the Florida House did not even consider it. Which should make the state more amenable to new and future breweries.

But enough law talk.  It makes my head ache.  What would I put in my PB Brewery taster tray?

“Legend holds that Christopher Columbus brought over the first orange to Florida’s shores. One expedition blossomed into more than 75 million trees, stretching across our sandy soil. We created Treasure Grove Citra Pale Ale with a similar excursion.

We started with the finest citra hops that gently inspire a slightly bitter citrus finish, sure to cause a rosy glow. With hints of grapefruit, tangerine and lemon, you’ll love the refreshing flavor in your next pint.”

“The fierce qualities of some of Florida’s earliest explorers are represented with our flavorful Conquistador Dopplebock. With a high ABV – over 7% – our brew is as
strong as the Spanish that conquered much of our coast. After one or two, you might start calling yourself Don Jose and looking for a helmet.”

“Strength comes in many forms. With our Banyan Brown Ale, the flavors develop slowly and wrap around your taste buds. You’ll taste notes of chocolate and a certain nutty hoppiness that will inspire you to ask for a second pint.

The Banyan Brown Ale is perfect for Florida winters. The mild body is enough to keep you warm, without making you reach for woolen mittens. With hints of caramel and cocoa, you’ll enjoy sipping the Banyan Brown Ale all year long.“

Florida beer is in the news for all the wrong Sterling/Clippers reasons.  But let’s stay positive and focus on the new breweries coming up who I hope will fight through legislative crap to sell good beer.  We start with Props Brewing.

The theme is airplanes (maybe they should collaborate with Hangar 24) and they are adding more fermenters this summer which is a good sign for any new-ish brewery.

Here is what I would put in my taster tray….

4 Kings Brown “Designed in the mountains of Alaska, Four Kings didn’t have a name. Our Head brewer & Co-Owner Mike Kee, named this ale is named after his Partner’s, Nate Vannatter, rich family heritage where “King” has been utilized for four generations as a middle name in his family.  Mike handcrafted this beer in the traditional American brown ale style.  Formulated using a combination of caramel malts to give this ale a slight carmel flavor and strong brown color.”

Rye of the Tiger
“Brewed with malted Rye grain and in the Biere de guarde style of a french farmhouse ale, Rye of the Tiger is made its way onto our year round beers.  For this large alcohol beer, it has a sweet finish after it attacks your taste buds with a moderate alcohol bite.  The color of this ale is a golden red hue.”

…and if it was holiday season I would add their Jovie Ale.

For the video reviews this month, I am doing something a bit different.  Reviewing a base beer and then a variant of that style of beer.  We started earlier this month with the famed Jai Alai IPA from Cigar City and now my review of the Humidor Series version IPA from the Tampa based brewery. 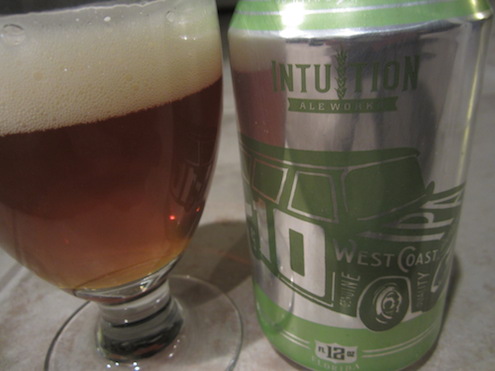 This Jacksonville, Florida IPA from Intuition pours a bright orange color. Love the can design of the car and the facts on the reverse side but the silver needs to be muted to be read better. I really have to glare at the can to see the malt bill.  This is a very pine and dank type of IPA. No citrus here. No sir.  Many pepper notes as well that really spices it up. Heavy malt backbone as well. Didn’t appreciate the first can that I tasted but this tasted better or my palate is acclimating to East Coast bitterness levels. 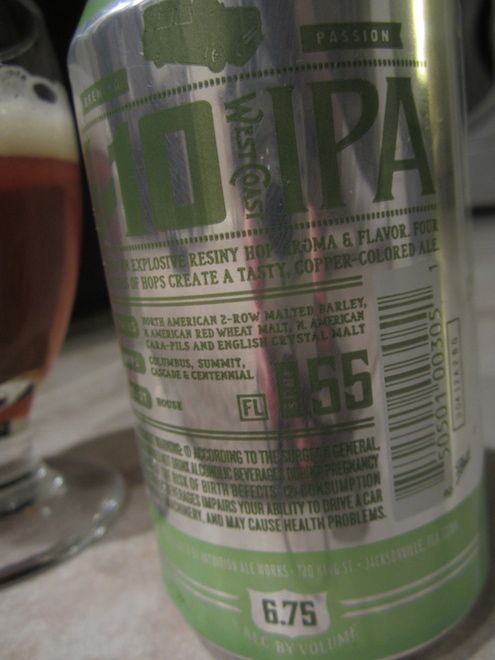 For the video reviews this month, I am doing something a bit different.  Reviewing a base beer and then a variant of that style of beer.  We start with the famed Jai Alai IPA from Cigar City.  Later this month, I will review the Humidor Series version IPA.

For Christmas, I received gift codes to the Let’s Pour craft beer website so that I could buy to my hearts content or the max amount that I was given (whichever came first) and one of the breweries that I purchased a beer from is Intuition Ale Works from Jacksonville, Florida. 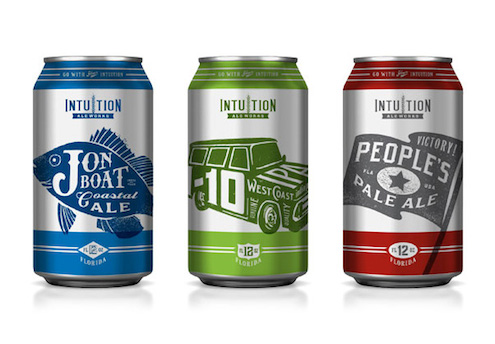 As you can see from the photo, they can their regular line-up of beers.  If I had seen the pale and coastal ale, I probably would have gotten those too to get the full flavor of this brewery helmed by brewer Ben Davis.

And if I was standing at the menu board in the taproom, I would pick the following two beers (and also get a beer popsicle, that they serve):

“A creamy and sweet milk stout brewed with English pale malt, flaked and roasted barley and English Crystal Malts. Bittered with Nugget hops, smoothed with 5% lactose. This beer is served with a Nitro tap and is non-vegan.”

“Pre-prohibition style Pilsner. Light and refreshing with a hint of crisp spice.”

“A Kentucky Common cold fermented with a slight sourness.”

Today, I will be talking craft beer events in Los Angeles in my posts.  So break out your Calendar app and start typing.

On Thursday, the second to last day of January you can sample from a Cigar City Collab Flight Night at the Congregation Ale House in Pasadena
Being such Cigar City fanatics we had to find a way to have an event! Five beer flight includes: NNB Cigar City Ale, De Proef Tropical Tripel, Coronado Last Spike and all Widmer Collabs. CC beer starts flown’ at 7PM.

Staying on the  helping those with less cash upfront front.  Brew Hub is a new contract and market penetration brew space for up and coming brewers that is based in Lakeland, Florida. (With more to come across the country, presumably if the idea catches hold.)

As they say on their website, “With our first brewing and packaging facility in Lakeland, Florida, we will become an incubation center for partner-brewers looking to capitalize on the fast-growing craft segment. Our unique, turnkey solution will help craft brewers overcome production and distribution barriers to brand profitability.”

Addendum: Beer Advocate has a nice piece on this new entrant into the craft beer world.

I have heard of cucumber soda (too scared to try it) but up until I saw this Cigar City label, I did not know of anyone else popping a cuke into a beer. I am sure it will give more ammunition to the grouches who say that craft beer has jumped the shark but the correct fruit or vegetable matched with an appropriate style can work wonders and accentuate the positives of each ingredient.

Case in point, The Bruery’s Sour in the Rye with kumquats. Everything melded perfectly. And maybe the cucumber will too.

For the month of February, I am highlighting breweries that opened in 2011. And our first stop is Florida and Tequesta Brewing Company.

And with beers like these Der Chancellor, Gnarly Barley, Terminally Ale, Julios Speltacular Weizen, Australian Amber, Vier Belgian Quad, Green Room’s Under Tow Barleywine, Green Room’s Head High IPA and Monk in the Trunks special release Belgian IPA, it looks like this new outfit is willing to take on many beer styles and many beer names as well.