This year both tangerine and pineapple are fresh and patriotic with the 2021 Enjoy By for the 4th of July from Stone Brewing.

For those of the THC and CBD persuasion, this year is 30 days of dankness. Which means the Enjoy By 4/20/20 is not just one day. And after the excellent Peak Conditions fruited IPA, I will watch to see how this new (or not) recipe will taste likel

First off, I am not even going to try to spell the name of the new series of beers from Stone.  Them’s the breaks when you choose a name like StocheeheenieWTF.  But I will try the beer.  The first in the series was the Grapefruit slam that I thought worked as a beer more than the marketing.  But I am a sucker for grapefruit and it worked well with the hops.  Now they have gone to the Belgian Quad and used Triticale which reliable Wikipedia (and other sources) describe as, “….a hybrid of wheat and rye first bred in laboratories during the late 19th century.” 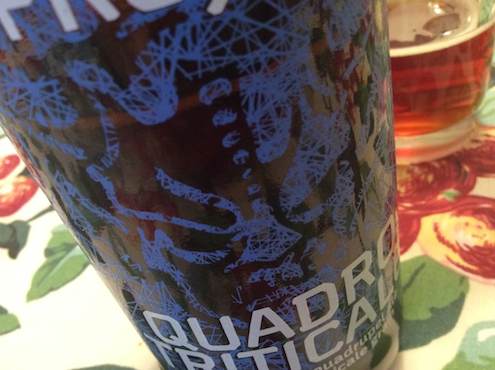 This beer was strange.  Not easy to drink.  It was sharp with an astringency to it that made me pucker, even though it wasn’t sour at all.  It also tasted thin.  I expect Quads to have a little heft to them.  Not viscous, per se, but have a solid malty backbone to lean against and this did not have it.  Their was also a lack of spice to it and it had more of a Belgian strong ale straightforwardness to it.  I couldn’t finish this one, to be honest.  I poured out a solid half a glass.  It did work better with the dessert than the main course in my testing but I think that was the sweetness of the fruit crumble that balanced out the strange taste that I will attribute to the Triticale or the yeast.

The second beer was the latest Enjoy By, with the patriotic date of 7/4/14 on it. 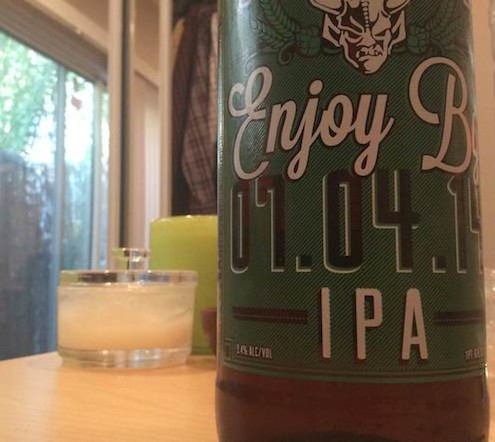 Needless to say this is bitter.  And a little less fruity than past incarnations that I remember.  But it certainly is crisper and more direct than the usual Stone hop bombs.  There is mango and pineapple notes followed by a dankness and heaviness as the beer warms up and hits the back of the palate.  It certainly sticks around as well.  Not many scrubbing bubbles.  And at over 9% abv, this is probably more a Triple or Imperial IPA depending on your taxonomic leanings.  There is a bit of acrid bitterness but the ABV doesn’t heat you up.  But I wouldn’t put someone in charge of the 4th of July grill who has had one of these.  My personal palate would have liked a less heavy dankness and a brighter fruit note but I am not like most Stone fans so this is probably more in line with their tastes than mine. 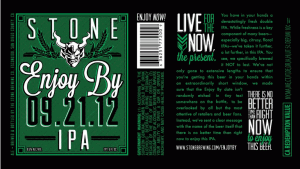 This is a unique spin on the whole “born on” dating system that also is good education for many a craft beer drinker about the fragility of hops in our favorite IPA’s and pale ales. But at this point, I expect nothing less from Stone.